Quarterback Dwayne Haskins and the Washington Football Team spent much of Sunday afternoon trying to find a way to consistently get moving against Arizona's much-improved defense.

“Once we got it figured out we started moving the ball,” Haskins said.

The problem was it was much too late. The Cardinals beat Washington 30-15 at State Farm Stadium, building a 20-0 lead by halftime and a 27-3 advantage by early in the fourth quarter. 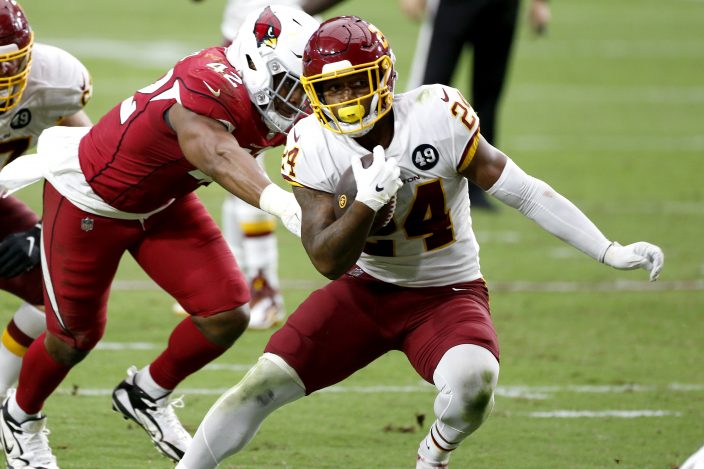 Washington Football Team running back Antonio Gibson (24) runs for a touchdown as Arizona Cardinals outside linebacker Devon Kennard (42) defends during the second half of an NFL football game, Sunday, Sept. 20, 2020, in Glendale, Ariz. (AP PhotoDarryl Webb)

Haskins was right that Washington looked much better in the fourth quarter. The offense finally scored a touchdown with 12:20 left when Haskins hit Terry McLaurin for a 24-yard score. It scored again when Antonio Gibson ran for an 11-yard touchdown with 6:38 remaining to pull within 27-15 after the 2-point conversion failed.

It didn't make much of a difference in Sunday's outcome, but it provided hope that future games will look different.

“Quick tempo, quick game, passing trying to figure out ways to get matches and slants. Getting Terry 1-on-1 coverage,” Haskins said. “Once it turned into a chess game where they played man coverage you have to call plays to get certain guys open. We started to figure that out as the game went on.”

Haskins had decent stats, completing 19 of 33 passes for 223 yards and one touchdown, but he had a costly fumble in the first quarter when Washington was in position to score. The second-year quarterback was hit on the throwing arm by Jordan Phillips, knocking the ball into the air, where it was grabbed by linebacker Chandler Jones.

“Early on, he missed some opportunities,” Washington coach Ron Rivera said. “When you get chances, you can't miss them. Unfortunately, we did. That's the truth of the matter. We did not play very well.”

It was a disheartening loss for a team that was riding high after a come-from-behind win in Week 1. Washington trailed 17-0 before rallying for a 27-17 win over Philadelphia.

“We’re a good football team,” Rivera said. “But we’re not experienced enough to overcome helping the other team.”

Washington's defense wasn't immune from the slow start. The group had three sacks, including one by rookie Chase Young, but for the most part Arizona's second-year quarterback Kyler Murray was comfortable in the pocket.

Murray finished with 286 yards passing, one touchdown and one interception. He also rushed for 67 yards, including touchdown runs of 14 and 21 yards, slipping through the Washington defense for big gains.

“I don't think we got worn down,” Rivera said. “I think you've got to give credit to the young man. He's a heck of a football player. When you're not stopping any phase of their game, they get an opportunity to do what they want.”

Washington appeared to have a glimmer of hope after pulling within 27-15 with over six minutes left, but the Cardinals responded with a lengthy drive. Rivera didn't call any timeouts to try and halt Arizona's momentum.

He had seen enough.

“At that point, I don't want to expose my players to injury,” Rivera said. “It's a long season. We've got 14 games left to play. We've got an opportunity to learn and grow and that's probably more important to me right now than exposing our guys to getting injured in a situation like that.”