Zach Whitecloud covered his face with his gloved right hand in anguish inside the penalty box. By the time he collected himself and walked out, the Dallas Stars were celebrating an overtime victory to send them to the Stanley Cup Final.

Whitecloud had flipped the puck over the glass for an automatic delay of game penalty, Dallas scored on the power play and Vegas lost the game and the Western Conference final.

“Just for that type of penalty to decide a game, it doesn’t make sense to me,” Golden Knights coach Peter DeBoer said. 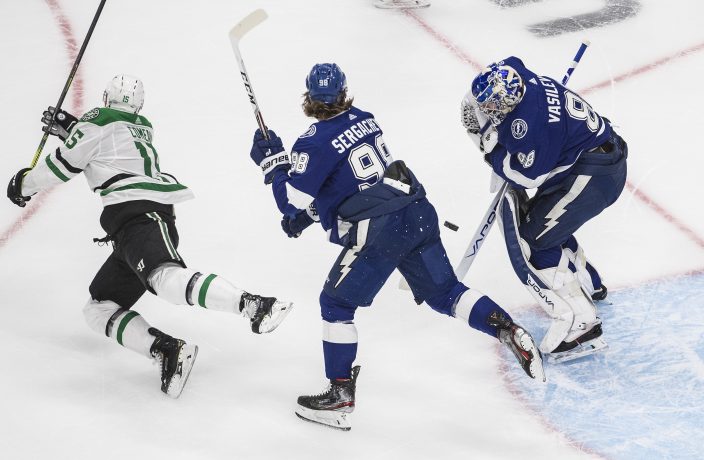 It's affecting a lot of games in the puck over the glass playoffs. Gone are the days that you have to mug somebody to get a penalty late in regulation or in overtime of a playoff game because referees swallow their whistles not to have too big an influence. Part of the reason for that is some of the penalties are automatic or blatant and can’t be ignored just because it's the Cup.

“With those, it’s not subjective,” Tampa Bay Lightning forward Alex Killorn said. “Those are penalties regardless. It’s not a judgement call by any means. I don’t know if the fans not being there affect anything at all, but you know when you’re taking penalties, you try not to take them because they can be so costly at the end of a game.”

It's not just this year, either. There were six puck over the glass penalties in the seven-game 2019 final between St. Louis and Boston.

Then again, after that call made up 3% of all trips to the box in the regular season, there have been 31 puck over the glass penalties through 125 games this postseason and roughly 20% of them have come in overtime, according to the officials-tracking website Scouting the Refs.

Longtime face of "Hockey Night in Canada" Don Cherry tweeted his hatred of the rule, which was put in coming out of the 2004-05 lockout to discourage players from sending the puck out of play to get a breather.

“I know why that rule was put in, and I agree with it,” said Stars coach Rick Bowness, who has held a head or assistant job in the NHL every season but one since 1991. “Now we ice it, but there was a time in our league where players, you just flip it out because you were tired. So, I understand why that rule was put in and it’s a good rule.”

Like DeBoer and many around hockey, Tampa Bay coach Jon Cooper isn't a fan of the rule but understands the intent. There's a real strategy to pressuring an opposing player who has the puck in his defensive zone knowing this is one of the things that can happen.

"They are forced errors," Cooper said. “The reason they’re putting them over the glass is because they’re under pressure, and I think at this time of year, the stakes are so high I’m surprised it doesn’t happen more.”

It happened again in Game 1 of the final between the Stars and Lightning when veteran Dallas forward Blake Comeau sent the puck flying into the tarped, empty stands in the third period. Teammate Jason Dickinson said after an accidental play like Comeau made, penalty killers are motivated to get him free, and they did with the help of goaltender Anton Khudobin.

But it's also not just puck over the glass penalties. New York defenseman Andy Greene was whistled for a four-minute double minor for high-sticking Tampa Bay's Nikita Kucherov and drawing blood late in regulation in Game 6 of the East final.

Cooper said that was bad luck on Greene's part, but it was so obvious it had to be called.

“Sometimes, the rules are the rules,” Stars winger Corey Perry said. “You’ve got to take advantage when you get a power play.”

Dallas clinched its spot in the final because it did that on Denis Gurianov's overtime goal. Yet it's also by far the most penalized team in the playoffs, so the penalty kill is prepared for the next time a Stars player puts a puck over the glass.

“Our PK has has had to do a job every game,” Dickinson said. “We take a lot of penalties in the playoffs. We’re not afraid of the challenge.”

Arians feels Brown has matured, will be good fit for Bu ...

The Tampa Bay Buccaneers are off t ...

UNLV football will be first with fans at Raiders' ...

Fans of UNLV football will be the ...