Down 12 with less than 5 minutes remaining, Cam Newton nearly pulled off the most unlikely of comebacks in his first road start with New England.

Instead, it was the Patriots that came up 1-yard short this time around against the Seattle Seahawks.

“The play was there, the play had been there all game,” Newton said. “Moving forward we just have to scheme up things and if we’re put in that position again hopefully we can have a better outcome.” 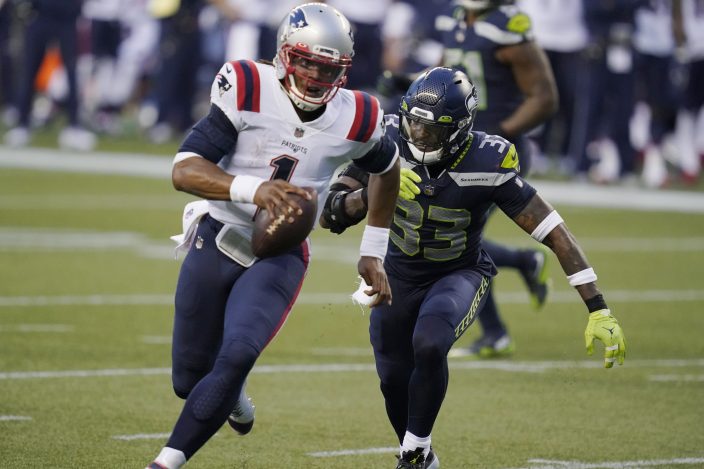 Newton was stopped short of the goal line on the final play of the game as Seattle held on for a 35-30 win over the Patriots on Sunday night.

It was the conclusion to a wild game where Newton and Seattle’s Russell Wilson took the spotlight and each shined. Wilson tied his career-high with five touchdown passes. Newton nearly led the Patriots back from a 35-23 deficit in the closing minutes.

His second rushing touchdown of the game pulled New England within 35-30. After Seattle was forced to punt, Newton led New England 80 yards in the closing seconds.

They reached the 1 on a pass to N’Keal Harry with 3 seconds left and called timeout. On the final play, Newton tried to run power to the left, but was upended by Seattle’s L.J. Collier in the biggest play of his young career.

Newton, who had two rushing touchdowns in the game, never got close to the goal line.

“In that type of situation, it’s humbling to have the respect of a team to have the ball in my hands. I just have to deliver,” Newton said. “I saw a clip of it, I could have made it right just by bouncing, just thinking too much. Or even just diving over the top. Playing a fast defense like that, as soon as you guess, you’re wrong.”

Despite the loss, it was terrific performance for Newton. The 397 yards passing were the most for Newton since his rookie season and the third most in his career. It was just the second time he completed 30 or more passes in a game.

Julian Edelman was his favorite target with eight catches for a career-high 179 yards. Harry also had eight receptions.

“That’s a hell of a ballclub over there man. Let’s not let’s not get it twisted. Well coached, so many guys over there that I know and then they just added Cam obviously,” Seattle safety Jamal Adams said. “But man, that’s a tough bunch over there. They’re gonna give a lot of people problems.”

If there was question about whether Newton can be more than a quarterback running power plays and occasionally making throws, he seemed to answer it by picking apart Seattle’s porous secondary.

“There are many ways to win in this game, we don’t want to become one dimensional,” Newton said. We had our opportunities and just moving forward we have a lot of things to be optimistic about, and yet we still have to get better. The reason you play this game is for one stat and one stat only and we didn’t get that statistic today and that’s a win.”

If there was a concern for New England’s offense moving forward, it was the lack of a run game without its quarterback having the ball. Sony Michel was mostly ineffective and had just 19 yards on seven carries. Rex Burkhead had 2 yards on six attempts.

The Patriots played without running back James White, who was inactive following the death of his father in Florida in a traffic accident earlier on Sunday.

“Of course our hearts go out to him,” New England coach Bill Belichick said.

Newton had 47 yards rushing and scored twice. It was his eighth career game with at least two TD runs, setting an NFL record for the most by a quarterback. It was not getting that final yard that was hard to shake.

“We put ourselves in a position to win and when you do that you have to finish and we didn’t do that today,” Newton said.

The college football world has no ...