As careful as the NFL has been about preventing an outbreak of the coronavirus within the league, one thing it can’t control is a rash of major on-field injuries. And that’s what it got Sunday.

Injuries often are the great equalizer in a collision sport like football. It's particularly upending when they come in bunches at the same position. Or when it comes in bunches everywhere on the roster.

San Francisco, which also saw quarterback Jimmy Garoppolo sidelined for the second half with a right ankle problem, might have been hit the hardest — and didn't have All-Pro tight end George Kittle or standout cornerback Richard Sherman to begin with. Two starters on the defensive line damaged their knees: Nick Bosa, the 2019 Defensive Rookie of the Year, and Solomon Thomas. Neither situation looks good. 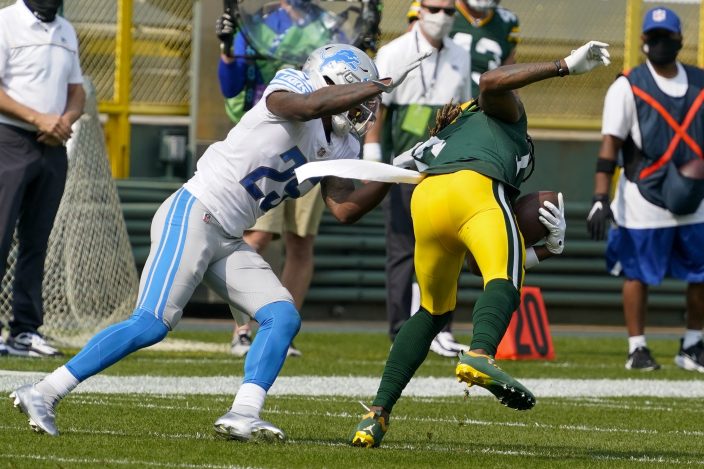 Detroit Lions' Will Harris is called for a horsecollar penalty on his tackle of Green Bay Packers' Davante Adams during the first half of an NFL football game Sunday, Sept. 20, 2020, in Green Bay, Wis. (AP PhotoMorry Gash)

Top running back Raheem Mostert, who opened the game with an 80-yard touchdown run, hurt his knee, too, and his backup Tevin Coleman, left the win at the Jets. With San Francisco scheduled back at the Meadowlands next Sunday against the Giants, coach Kyle Shanahan could be in scramble mode.

“You have a little mixed emotions when you lose some guys like that,” said 49ers coach Kyle Shanahan, who questioned the quality of the turf at MetLife Stadium. “When you do lose some good guys like we like we did, that’ll probably be for a while, we need guys to get better.”

Among the guys who won't be getting better anytime soon after a brutal day is Giants star running back Saquon Barkley, who suffered a severe injury to his right knee. The 2018 Offensive Rookie of the Year went down hard on the Chicago sideline after trying to fend off Bears safety Eddie Jackson on a 6-yard carry early in the second quarter. He dragged his right leg behind him as he was helped back across the field to the Giants sideline.

“Obviously, you know, Saquon is one of the best running backs in this league, so nobody’s going to be able to do what he does, what he’s done,” said his backup, veteran Dion Lewis. “We gotta do what we can do, be ourselves, and do whatever the coaches ask us to do and work hard every day.”

All-Pro running back Christian McCaffrey, perhaps the most versatile offensive player in the league, departed Carolina’s loss to the Buccaneers with a right ankle injury.

“It’s tough when you don’t have your best players on the field,” quarterback Teddy Bridgewater said.

Also missing — deep breath — for portions of games were wideouts Davante Adams of the Packers (hamstring); the Colts’ Parris Campbell (carted off with a leg injury); the Giants’ Sterling Shepard (toe); and the Broncos’ Courtland Sutton (knee).

More: quarterbacks Tyrod Taylor, who didn’t start the Chargers’ game against Kansas City after sustaining a chest injury before kickoff; and the Broncos’ Drew Lock (shoulder).

—Indianapolis lost top running back Marlon Mack to an Achilles tendon injury last week, and safety Malik Hooker left against Minnesota with a similar issue. The Colts also played without cornerback Rock Ya-Sin, who was sent to the hospital with a pregame stomach ailment.

Minnesota was minus running back Mike Boone (concussion) and linebacker Anthony Barr (shoulder) at the end of the game.

NFL teams are accustomed to losing players; sometimes the race to the Lombardi Trophy is more for the survivors rather than the most talented clubs. The additional problem in 2020 is, well, it's 2020.

While the league's precautions against COVID-19 have thus far worked extremely well, the injury toll is likely to mount. There was little on-field preparation during the summer, and no preseason games. Virtually no contact in a contact sport.

Nor could players use team facilities to stay in shape, which made soft-tissue injuries more likely to occur.

What occurred Sunday, though, is more ominous. Serious injuries sidelining key players for weeks or months — or the rest of the schedule — are worrisome for the guys getting hurt, of course. And certain to damage the quality of play.

With one point from its opening tw ...