The October surprise of 2020 came early. 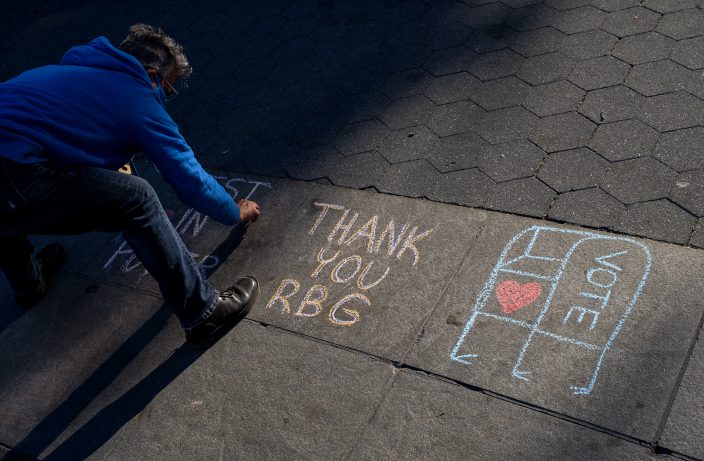 Kimberly Miller, of the Brooklyn borough of New York, who is with Gays Against Guns, leaves a chalk message honoring Justice Ruth Bader Ginsburg on a Washington Square Park walkway in New York Saturday, Sept. 19, 2020, a day after the death of the Supreme Court justice. (AP PhotoCraig Ruttle)

The death of Ruth Bader Ginsburg injects another generational fight to an election year that already featured the deadliest public health threat in a century, the worst economic collapse since the Great Depression and the most significant civil unrest since the civil rights era. Six weeks before Election Day, the fight to replace Ginsburg is set to dominate headlines, with the prospect of reshuffling voters' priorities and campaign strategies, especially for President Donald Trump.

Still, the pandemic rages on. Millions of school children are stuck at home. The economic recovery is dragging. And more than 200,000 Americans have died.

Coming soon: one of the most highly anticipated presidential debates in the modern era is just eight days away.

Is this suddenly a new election?

A presidential election that was shaping up to be a referendum on Trump's divisive leadership through dueling crises may suddenly be transformed into one about Trump's next lifetime appointment to the nation's highest court.

It's clear that the most passionate partisans in Washington and elsewhere will be obsessed with the election-eve nomination fight. The stakes are huge for the future of the U.S. judiciary and several major issues, abortion rights among them. But it's less clear that the persuadable voters of Florida, Pennsylvania and Arizona are equally interested in the Supreme Court battle.

Americans For Prosperity President Tim Phillips, a conservative leader whose organization has spent months knocking on swing-state voters' doors and has a keen sense of the electorate, is skeptical that the court battle will change the direction of the election. He was out canvassing over the weekend and tells us that the Supreme Court didn't even come up. He notes that most Americans are dealing with much more imminent crises: millions of children can't go to school, grandparents remain in isolation, and Main Street in towns across the nation is struggling to stay open.

If anybody says they know how this nomination fight will or won't reshape the 2020 landscape, they're only guessing.

And the nominee is?

Those close to the president are encouraging him to announce his Supreme Court nominee on or before the day of the first presidential debate, which is Sept. 29.

He has promised to pick a woman, and Republicans are hopeful that a female pick could help Trump's GOP with its problem with suburban women and serve as a counterweight to Biden's historic selection of Sen. Kamala Harris as his running mate. Any nominee will have a record and a background that will undergo intense scrutiny.

Democrats will be praying for unearthed baggage that might delay the process or reflect poorly on Trump, as was the case with the president's last nominee. Trump's team will do everything in its power to make sure that doesn't happen.

Under normal conditions, Supreme Court nominations are immensely important. In this case, the pick could directly or indirectly reshape all three branches of the U.S. government.

The pandemic's death toll, which exceeded 200,000 on Sunday, is staggering, by far the highest in the world. For context, more Americans have now been killed by COVID-19 than were killed in all the military conflicts after World War II and the 9/11 attacks combined.

The scary part is that there are still several hundred Americans dying each day heading into flu season. Before this is over, COVID could overtake cancer and heart disease as the leading cause of death in the United States this year.

Trump, who largely left states to deal with the pandemic on their own, has been escalating his promises of a vaccine in the near future to stop the death. But the president's well-documented history of spreading false information about the pandemic and other issues has badly damaged his credibility, and as a result, roughly half of Americans report that they may not take the vaccine when it's available.

Can Trump reset expectations for the first debate?

Trump and his allies have spent much of the summer degrading Biden's mental acuity, portraying the 77-year-old Democrat as a senile old man who has lost the capacity to speak or think. Polling suggests that this line of attack has not been effective, and worse for Trump, it's dramatically lowered expectations for Biden in the first debate.

It may be too late already, but Trump's team has to shift those expectations — at least a little — before their first debate.

Biden is a far more experienced debater and has a much better command of global affairs and domestic policy than Trump. At the same time, Trump will enter the debate vulnerable on multiple fronts, having been caught on tape encouraging foreign governments to meddle in the election before presiding over the worst economic collapse and public health crises in a century.

Biden has the experience and the ammunition to do real damage. But a week before the debate, thanks to Trump's messaging, the Democrat is the perceived underdog.

While it's true that both candidates have multiple paths to 270 electoral votes, their chances of winning would decrease dramatically if they fail to capture the state's 20 electoral votes. There has been little public polling in recent weeks, but each side privately tells us the race there is tightening.

Trump is scheduled to campaign in Pennsylvania twice this week. And after Florida, no state will see more spending on presidential advertising over the coming six weeks than Pennsylvania, according to the ad tracking firm Kantar/CMAG. Also, just days ago, Biden unveiled a frame for the election that's decidedly Pennsylvania-focused: This is a campaign between “Scranton and Park Avenue," Biden declared, drawing a contrast between his working-class Pennsylvania roots and Trump's privileged upbringing in New York.

Trump became the first Republican since 1988 to win Pennsylvania four years ago. But he did it by just 44,000 votes out of more than 6 million cast.