It’s been a while since anyone could honestly say this about the Jacksonville Jaguars: They’re fun to watch on offense.

The Jaguars (1-1) are off to their best two-game start on that side off the ball in two decades, scoring a combined 57 points against division rivals Indianapolis and Tennessee.

They’re balanced and efficient. They’re organized and unpredictable. They’re creative and convinced they’re only going to get better. They host Miami (0-2) on Thursday night. 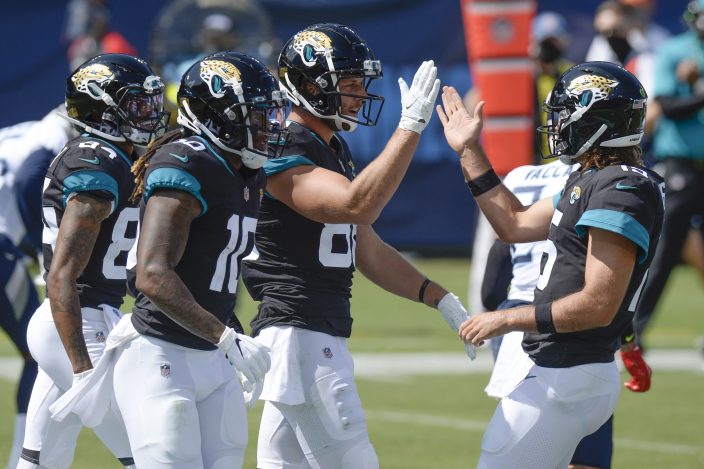 Jacksonville Jaguars tight end Tyler Eifert (88) is congratulated by quarterback Gardner Minshew, right, after teaming up for a 19-yard touchdown pass against the Tennessee Titans in the first half of an NFL football game Sunday, Sept. 20, 2020, in Nashville, Tenn. (AP PhotoMark Zaleski)

“We feel like we can go toe to toe with anybody,” receiver DJ Chark said. “It doesn’t matter. … I think it’s just the mentality that we have, whether it’s 30-17 or it’s a tie game.”

It starts with quarterback Gardner Minshew, who has flourished so far in his first year as a full-time starter. Minshew has more passing yards (512) than Lamar Jackson, more touchdown passes (six) than Patrick Mahomes and a higher completion percentage (75.4) than just about everybody in the league.

He’s been at his best on third downs and in the red zone — two areas of weakness in 2019 — and his only turnovers were two somewhat-fluky interceptions in a 33-30 loss at the Titans on Sunday.

Jacksonville Jaguars running back James Robinson (30) scores a touchdown on a 17-yard run against the Tennessee Titans in the second half of an NFL football game Sunday, Sept. 20, 2020, in Nashville, Tenn. (AP PhotoWade Payne)

They brought in Jay Gruden as offensive coordinator and Ben McAdoo as quarterbacks coach, charging two ex-head coaches with the next stage of his development.

The results have been better than most outsiders imagined, stifling speculation about the Jags tanking in hopes of drafting Clemson star Trevor Lawrence. Minshew is making plays from the pocket and getting more from everyone around him.

He's the first player in franchise history to open a season with three or more TD passes in consecutive games and the first to accomplish that feat in three straight outings, which includes the 2019 finale.

The last time anyone in Jacksonville felt this good about the team’s offense was in 2000, when Fred Taylor, Jimmy Smith, Keenan McCardell and Mark Brunell gave the Jaguars a chance every week. That was also the last time the franchise scored more than 57 points in its first games.

Shenault has been Jacksonville’s most significant offensive addition. The second-round draft pick from Colorado has six receptions for 72 yards and seven carries for 47 more. He’s made the Jaguars more prolific while allowing new wrinkles each week.

The Jaguars have just two sacks in two games. They did little Sunday to affect Ryan Tannehill, who finished with a career-high-tying four TD passes.

Rookie K’Lavon Chaisson got his first sack, but 2019 Pro Bowl selection Josh Allen has been shut out in two games and the Jaguars are getting even less push from their interior D-line.

Keelan Cole has a TD catch in three straight games and has become one of Minshew’s top targets. He had five catches for 47 yards and a touchdown in the opener and then six for 58 and a score in Nashville.

Throw in his TD reception in the 2019 season finale and he’s matched the longest TD streak of his four-year NFL career.

Jacksonville’s special teams weren’t even average against Tennessee. Rookie Chris Claybrooks muffed two returns, although the Jaguars kept the ball and scored after both. And placekicker Josh Lambo cost the team four points in a three-point loss.

Lambo missed his fifth extra point in four seasons. He also botched a squib kick near the end of the first half, accidentally hitting the ball right at a defender. It led to a field goal and three points Tennessee barely had to work to get.

Center Brandon Linder (knee) and cornerback D.J. Hayden (concussion) left the game and did not return. Linder started all 16 games last season for the first time in his seven-year pro career.

5 — the times Jacksonville has punted in two games. It’s notable progress for a team that punted at least four times in the first half of nine games in 2019.

The Jaguars can make it three in a row against Miami on a short week. They play Thursday night in Jacksonville.

It was improbable enough that ligh ...

Another defensive debacle vs another winless team for Jags