Sean McVay and the Los Angeles Rams are not interested in taking any steps backward.

Even after three straight winning seasons with two division titles and a Super Bowl trip during McVay's first three years in charge, the Rams were a popular preseason pick to struggle in the ultracompetitive NFC West this season. They had lost an uncommon amount of veteran talent without replacing much of it from outside, and the rest of their division improved dramatically.

But after two weeks, the Rams (2-0) are evoking memories of the way they played in their NFC championship season in 2018. McVay's offense has racked up 871 yards while looking much sharper and more creative than it did last season, while the defense is off to an encouraging start under new coordinator Brandon Staley after holding Philadelphia to just one lengthy touchdown drive in LA's 37-19 win Sunday. 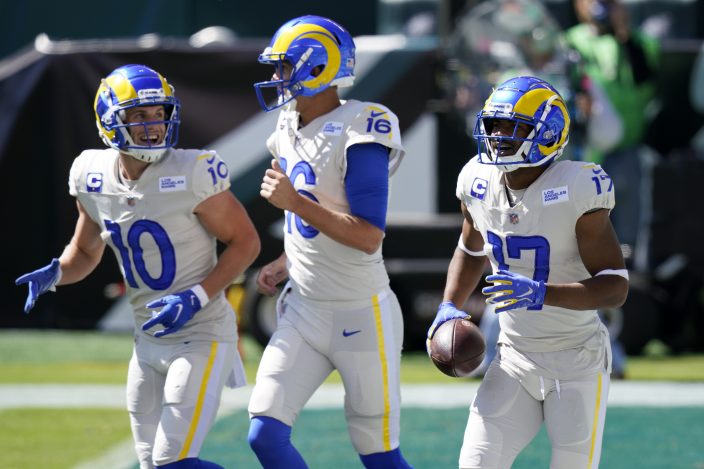 Los Angeles Rams' Robert Woods (17), Jared Goff (16) and Cooper Kupp (10) celebrates after a touchdown by Woods during the first half of an NFL football game against the Philadelphia Eagles, Sunday, Sept. 20, 2020, in Philadelphia. (AP PhotoChris Szagola)

After holding off Dallas in their opener and routing Philly on the road, the Rams already look more potent and more cohesive than last season, when they still went 9-7 and finished seventh in the NFC.

But are they an elite team? The Rams believe they are, and they think this start is only the beginning.

“I hope it changes what you guys see with our team,” said receiver Robert Woods, who made two catches and rushed for 19 yards and a TD in his first game after signing a lucrative four-year contract extension. 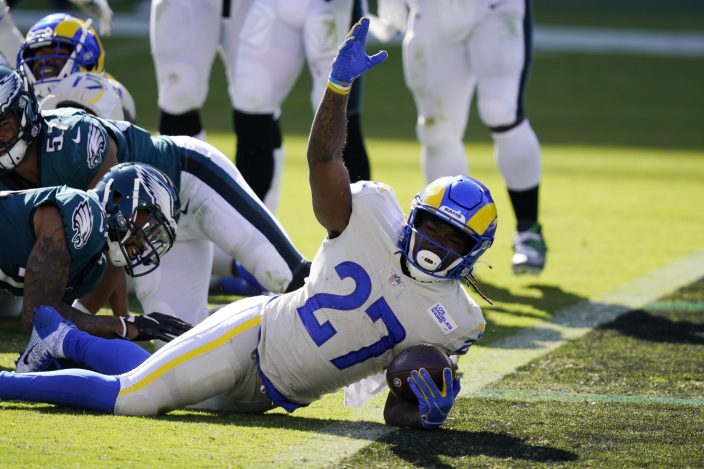 Los Angeles Rams' Darrell Henderson reacts after scoring a touchdown during the second half of an NFL football game against the Philadelphia Eagles, Sunday, Sept. 20, 2020, in Philadelphia. (AP PhotoChris Szagola)

McVay's decision late last season to get his tight ends more involved on offense is still paying off massively. Tyler Higbee caught five passes in Philly for 54 yards and three touchdowns, the most TDs by a Rams tight end since Damone Johnson in 1988. Higbee also showed off his impressive blocking skills as McVay used him to maximum effect. Los Angeles just might have found one of the NFL's top tight ends on its own roster. 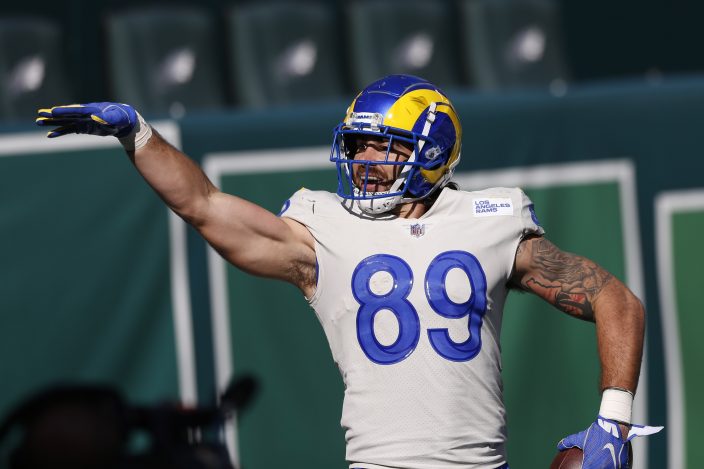 Los Angeles Rams' Tyler Higbee celebrates after catching a touchdown pass during the second half of an NFL football game against the Philadelphia Eagles, Sunday, Sept. 20, 2020, in Philadelphia. (AP PhotoLaurence Kesterson)

The Rams' defense did not post impressive numbers up front. The Eagles rushed for 121 yards and two TDs, while Aaron Donald and Los Angeles' pass rushers failed to sack Carson Wentz, who was dropped eight times in Philadelphia's season opener. The Rams generated only three quarterback hits, and their starting defensive line made only five tackles, including just one by Donald.

One week after Malcolm Brown posted his career high in yards rushing (79), Darrell Henderson set his own career high with 81 yards and a touchdown. The second-year pro had a hamstring injury in camp, but Henderson intends to be a major part of the Rams' post-Todd Gurley ground game alongside Brown and rookie Cam Akers. “As a back, once you hit your rhythm and your momentum, you feel like can’t nobody stop you," Henderson said Monday. "It was one of those days (Sunday). The Rams' running game has always been strong. We're just keeping it going.”

Cooper Kupp was a surprising choice as the Rams' punt returner, and the starting receiver made their single biggest mistake in Philadelphia when he dropped a punt he shouldn't have been fielding anyway inside his 10 right before halftime. The Eagles quickly turned it into a touchdown, keeping the game closer than it deserved to be. McVay says he will stick with Kupp at the spot instead of giving the job to someone who can dedicate more time to it, like Nsimba Webster. “I still have the same trust in Cooper Kupp,” McVay said. “He’s going to be a huge part of everything we do.”

LG Joe Noteboom left the game in Philadelphia with a calf injury, and Akers was sidelined with a rib injury.

0: The number of catches made by Eagles receivers against cornerback Jalen Ramsey. Wentz threw in Ramsey's direction only twice, and the highest-paid defensive back in the NFL completely shut down a passing option on every play. The Rams will need Ramsey's shutdown skills again this week against Buffalo's prolific Josh Allen.

Another East Coast trip to see the Bills (2-0), who present another stiff offensive challenge. The lengthy flight and early start time had no negative effects in Philadelphia, but the Rams are only at the start of a long season featuring a whopping five trips back east.

Cardinal George Pell, who was conv ...