The Seattle Seahawks seem determined to see just how much Russell Wilson’s talent and skill can carry them.

Because for the first two weeks of the season, the Seahawks' 2-0 start has been predicated on Wilson playing some of the best football of his career and making up for a defense that continues to show deficiencies, especially when trying to protect a lead.

Seattle’s wild 35-30 win over New England on Sunday night was another showcase performance for Wilson. He matched his career high with five touchdown passes and has nine through the first two weeks. 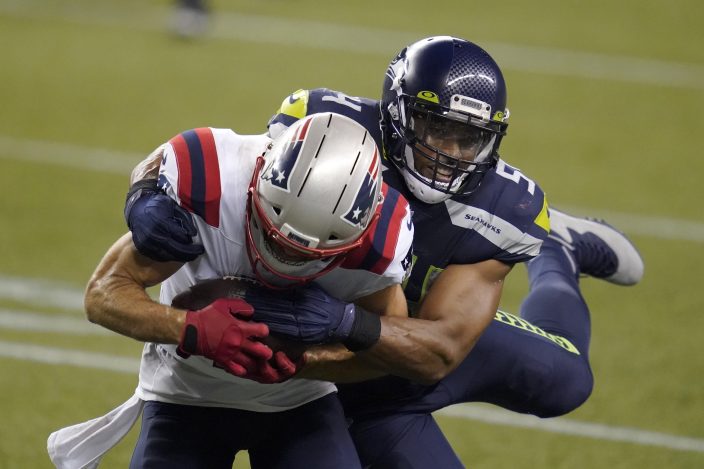 Wilson is orchestrating Seattle’s offense with inspired determination and confidence with seemingly all of his throws.

And the Seahawks have needed every bit of what Wilson is bringing to make up for a defense that has surrendered an eye-popping amount of yards in the first two games and continues to have a mostly absent pass rush.

“We’ve given up too many explosives. ... We've got to do a better job there and we have to execute better,” Seattle coach Pete Carroll said Monday. “We gave away, I don’t know, maybe 80, 100 yards in situations there that we didn’t need to give up. And we have to play cleaner.” 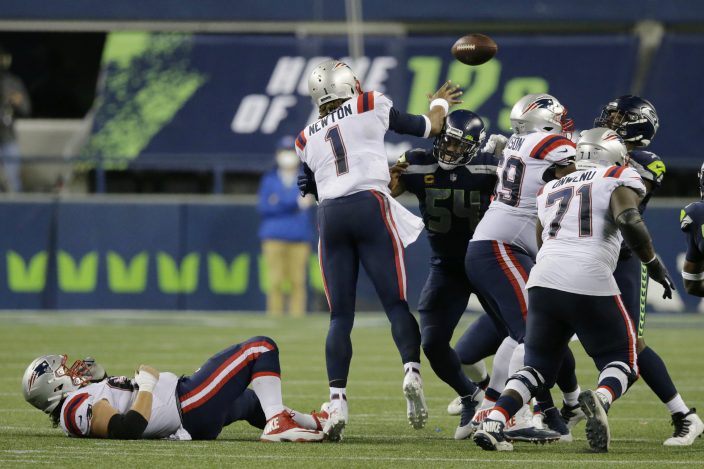 It’s a balance and one Seattle would like to figure out if for no other reason than to limit stress. The 73 points scored in the first two weeks is the second-highest total to start a season in franchise history.

But Seattle has also allowed 831 yards passing in the two games, the second-highest total by any team through the first two weeks of the season, according to the Pro Football Reference database. Only the 2018 Kansas City Chiefs allowed their opponents more passing yards through two games at 860.

Of course, those Chiefs also had the MVP in Patrick Mahomes and went on to win 12 regular-season games and reach the AFC Championship.

Maybe Wilson is on a similar path?

Seattle offensive coordinator Brian Schottenheimer deserves recognition for the efficiency of the Seahawks offense. While Week 1 was heavy on Wilson through the air, there was balance in how Seattle attacked the Patriots.

Wilson attempted 27 passes, but Seattle also ran the ball 30 times and finished with 154 yards rushing. Those are benchmarks that will keep Carroll happy with the type of balance Seattle is getting but doesn’t take away the explosiveness that’s been in display in the pass game.

Seattle managed one sack and just five quarterback hits on New England QB Cam Newton. The pass rush continues to be a huge contributing problem to the passing yards being allowed. Even when Seattle brings extra pressure, it’s struggling to get to the quarterback. Seattle must find a fix or a secondary that is already giving up huge chunks of yards will have more chances to be exposed.

And now they’ll be without veteran Bruce Irvin for the rest of the season after he suffered a torn ACL in his knee in the fourth quarter.

It’s not the flashiest group in the league, but it has been highly effective for two games.

Veteran TE Greg Olsen had a rough home debut. He mishandled his only target of the game on Seattle’s opening drive, watching the catchable pass bounce off his hands and be returned for a touchdown by Devin McCourty. Olsen also had a false start penalty.

9 — Wilson is the third player in the Super Bowl era to have nine or more TD passes and one or zero interceptions in the first two weeks of the season. The other two were Mahomes in 2018 and Peyton Manning in 2013. Both went on to win the MVP award in those seasons.

Irvin and defensive back Marquise Blair are both done for the season due to torn ACLs.

Blair had emerged through training camp as Seattle’s primary nickel cornerback and was doing well in making the transition from safety. Ugo Amadi is likely to take over.

Irvin played two roles for Seattle as the strongside linebacker in its base defense and as a pass rusher in nickel and throwing situations.

“It was really great to have (Irvin) back. It was such a positive factor, such a great example of what our program is about,” Carroll said.

Seattle’s secondary will face another big test with a visit from Dak Prescott and Dallas.