Wisconsin's attorney general announced Monday that he has selected a former Madison police chief to serve as an independent consultant for prosecutors weighing whether to file charges against the officer who shot Jacob Blake, a Black man who was left paralyzed from the waist down.

The shooting of Blake on Aug. 23 by a white Kenosha police officer made Wisconsin the epicenter of the nation’s ongoing debate over police violence and racial injustice. It came three months after the death of George Floyd in the custody of Minneapolis police.

Noble Wray, the expert who will review the file, is Black. Following his retirement as Madison's chief in 2013, Wray has become a national leader in working on police reform, fighting racism and educating about implicit bias. Wray was chief for nine years and worked 30 years as a police officer, experience that Attorney General Josh Kaul and Kenosha County District Attorney Michael Gravely said would be crucial when reviewing the file. 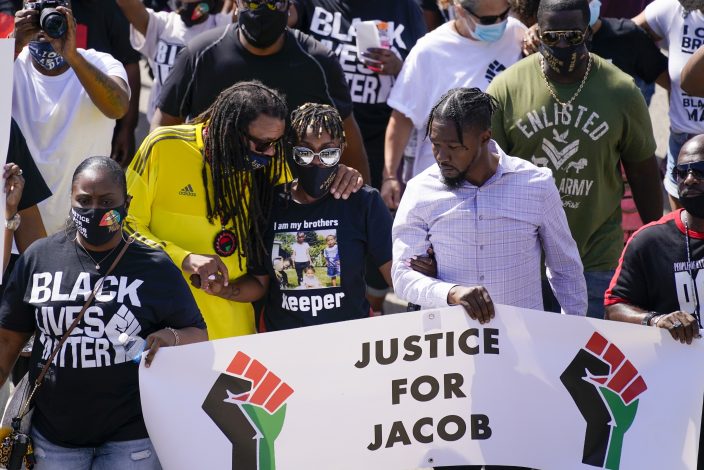 FILE - In this Aug. 29, 2020, file photo, Jacob Blake's sister Letetra Widman, center, and uncle Justin Blake, left, march at a rally for Jacob Blake in Kenosha, Wis. Wisconsin's attorney general planned to provide an update Monday, Sept. 21, 2020 on the investigation into the police shooting of Blake, a Black man who was shot in the back by a white police officer last month, sparking days of protests. (AP PhotoMorry Gash, File)

Gravely said he requested the consultant but that he asked the Department of Justice to choose.

Kaul said his department's investigation of the shooting is in its final stages. When it's done, he will turn it over to Wray for review and an analysis. It will then be up to Gravely about whether to file charges. Gravely said Monday that he had not made any decision about filing charges yet.

Gravely said Wray would bring “diverse” and “abundant” perspectives to the case.

Wray said he will provide insight and perspective to the case but not prejudge it. Wray said he will complete his review as quickly as possible, but he has not been given a timeline once he receives the investigative file.

“I have not prejudged the case,” Wray said.

Blake was shot in the back seven times after walking away from the officer and two others who were trying to arrest him. The officer, Rusten Sheskey, shot Blake after Blake opened an SUV’s driver-side door and leaned into the vehicle. Three of Blake’s children were in the back seat. The shooting was captured on video and circulated quickly online, fueling protests hours later.

The state Justice Department has said a knife was recovered from Blake’s vehicle, but it has not said whether he was holding it when officers tried to arrest him.

Blake’s attorney, Ben Crump, has said that Blake was only trying to break up a domestic dispute and did nothing to provoke police. Crump has called for the arrest of Sheskey, the officer who shot Blake, and for the two other officers involved in the shooting to be fired.

Sheskey and the other officers who were at the scene — Vincent Arenas and Brittany Meronek — were placed on administrative leave pending the outcome of an investigation by the Wisconsin Department of Justice. None of them have been charged.

The Kenosha police union has said that officers were dispatched on Aug. 23 because of a complaint that Blake was attempting to steal the caller’s keys and vehicle. Union attorney Brendan Matthews said officers were aware that Blake had an open warrant for felony sexual assault before they arrived.

Blake pleaded not guilty on Sept. 4 to charges accusing him of sexually assaulting a woman in May. A trial date was set for Nov. 9.

Kenosha is a city of about 100,000 people on the shores of Lake Michigan midway between Milwaukee and Chicago.

Jacob Blake speaks out for first time since police shooting

Police: Most arrested during Kenosha protests not from city