Bryce Harper was hitless in his return from back stiffness and Philadelpia manager Joe Girardi was ejected in the third inning of a 5-1 loss to the Washington Nationals on Monday night that dropped the Phillies back to .500 and hurt their playoff hopes.

A day after striking out with the bases loaded in the seventh off a loss to Toronto and coming out of the game, Harper went 0 for 4 with three strikeouts as the designated hitter, dropping his average to .254. 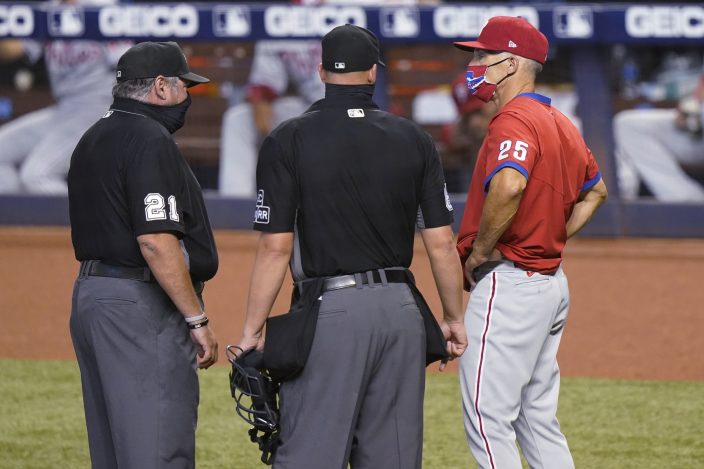 Philadelphia Phillies manager Joe Girardi (25) argues a call with umpires Hunter Wendelstedt (21) and Stu Scheurwater during the first inning of the second game of a baseball doubleheader against the Miami Marlins, Sunday, Sept. 13, 2020, in Miami. (AP PhotoWilfredo Lee)

Third-place Philadelphia, trying for its first postseason appearance since 2011, fell to 27-27 and with six games left dropped behind Cincinnati (28-27) in the race among teams tor two playoff berths among teams that don't finish first or second. San Francisco (26-26) and Milwaukee (26-27) also are in contention.

Girardi and center fielder Roman Quinn were ejected in the third inning for arguing a call by plate umpire Junior Valentine.

Girardi came out of the dugout to argue after Quinn took a called third strike on an 84 mph splitter from Aníbal Sánchez with a full count. Quinn was replaced by Mickey Moniak, who went to left. Adam Haseley shifted from left to center. 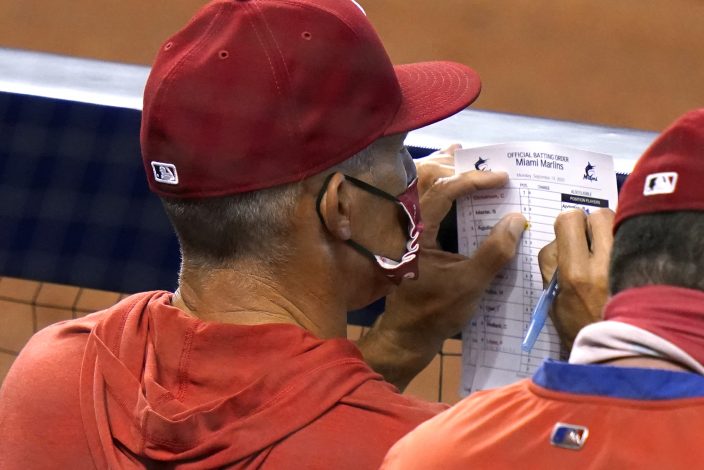 Philadelphia Phillies manager Joe Girardi looks at the lineup during the fourth inning of a baseball game against the Miami Marlins, Monday, Sept. 14, 2020, in Miami. (AP PhotoLynne Sladky)

Philadelphia lost to the defending World Series champions for the first time in seven games this season. The Nationals are last in the NL East at 21-32.

Sánchez (3-5) allowed one run and four hits in five innings and combined with four relievers on a six-hitter.

Philadelphia scored its only run in the fifth when Sánchez was called for a balk with Moniak on third. 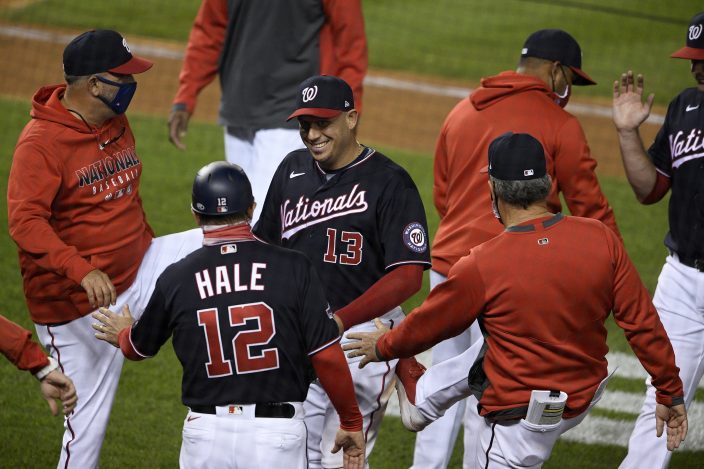 Washington Nationals' Asdrubal Cabrera (13) celebrates with third base coach Chip Hale (12) and others after a baseball game against the Philadelphia Phillies, Monday, Sept. 21, 2020, in Washington. (AP PhotoNick Wass)

Asdrúbal Cabrera hit an RBI single in the first, and Washington took a 2-0 lead later in the inning when Brock Holt stole second and catcher Andrew Knapp's throw got by second baseman Andrew Knapp and into center field for an error that allowed Juan Soto to score from third.

Luis García added an RBI groundout for a 3-1 lead in the fifth, and Brock Holt hit a two-run single in the seventh off Blake Parker. 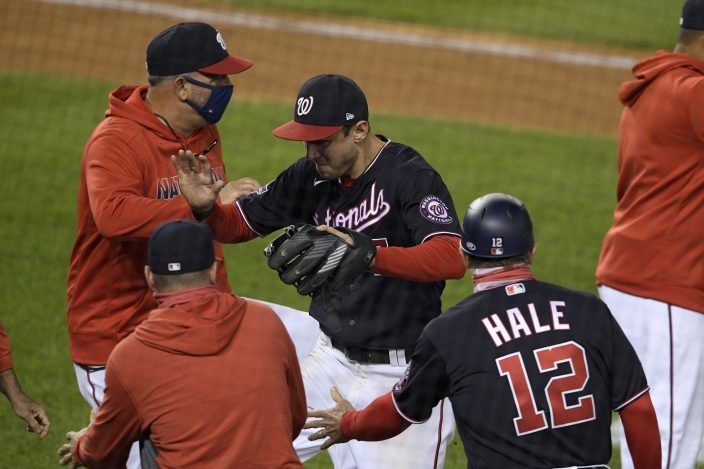 Philadelphia committed an error and had a runner caught stealing in each of the first two innings. The Phillies finished with three errors. 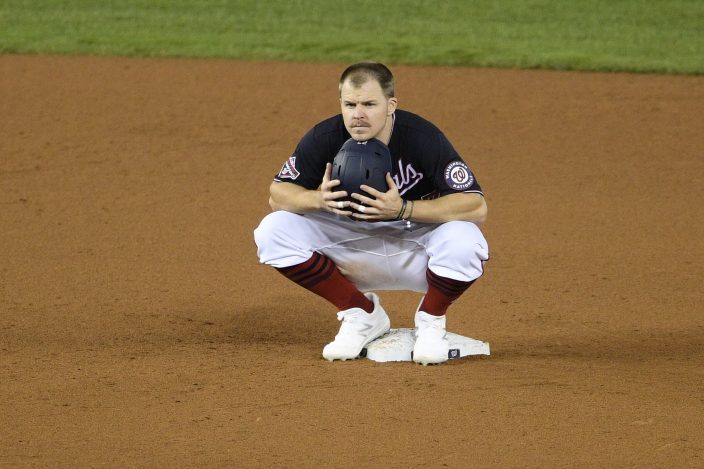 Washington Nationals' Brock Holt crouches at second during a pitching change during the seventh inning of a baseball game against the Philadelphia Phillies, Monday, Sept. 21, 2020, in Washington. (AP PhotoNick Wass)

Nationals: 3B Carter Kieboom left in the sixth after being hit in the left wrist by Wheeler and was replaced by Josh Harrison. ... RHPs James Bourque (right elbow strain) and Aaron Barrett (right triceps strain) were put on the 10-day IL. LHP Seth Romero (broken right hand) was transferred to the 60-day IL ... RHP Tanner Rainey (right forearm strain) likely will not pitch again this season. ... Paolo Espino's contract was selected from the alternate training site and OF Yadiel Hernández was recalled.

Phillies: RHP Aaron Nola (5-3, 2.92 ERA) is to start the first game of a doubleheader against Washington on Tuesday. 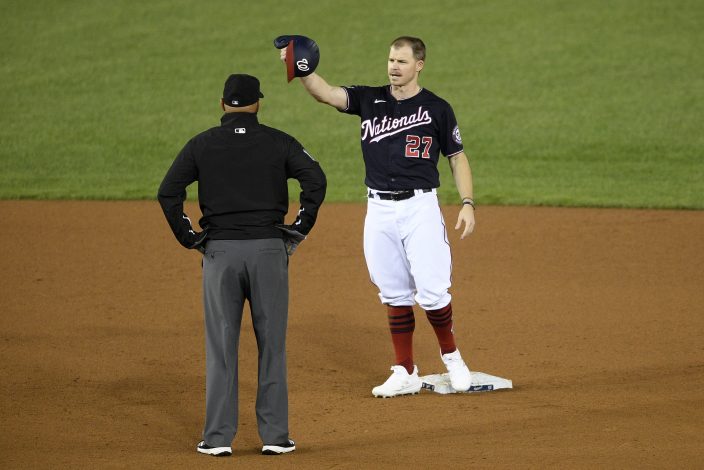 Washington Nationals' Brock Holt stands at second as he talks with second base umpire Vic Carapazza during a pitching change in the seventh inning of a baseball game against the Philadelphia Phillies, Monday, Sept. 21, 2020, in Washington. (AP PhotoNick Wass)