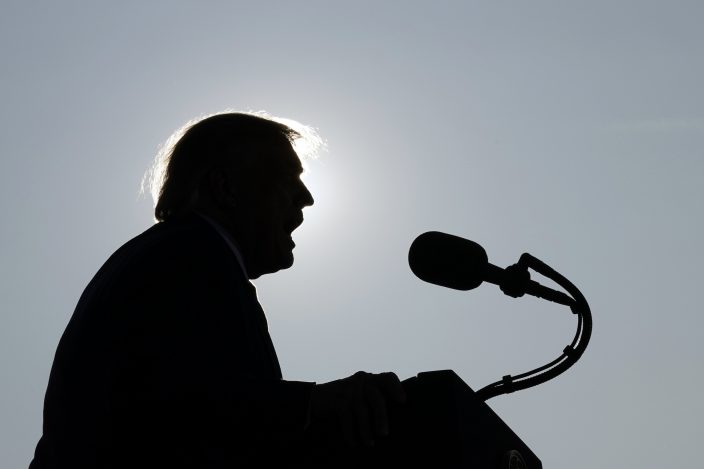 UN-GENERAL-ASSEMBLY — The U.N.’s first virtual meeting of world leaders is set to start with pre-recorded speeches from some of the planet’s biggest powers, kept at home by the coronavirus pandemic that will likely be a dominant theme at their video gathering this year. By Jennifer Peltz and Edith M. Lederer. SENT: 640 words, photos. Also see MORE ON UNGA below. 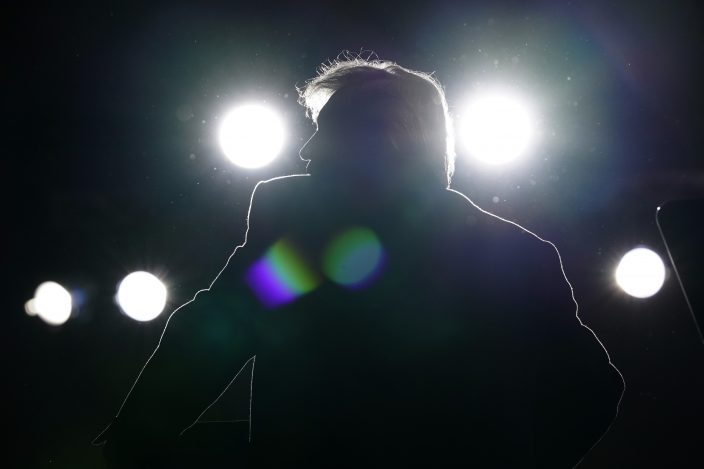 WESTERN-WILDFIRES — A wildfire scorching its way through brush and timber from the mountains to the desert northeast of Los Angeles threatens more than 1,000 homes as crews across the West battled dozens of other major blazes. The Bobcat Fire was advancing at a mile or two an hour at times and continued to threaten the Mojave Desert town of Pearblossom after burning into the Antelope Valley foothill area, on the other side of the San Gabriel Mountains from Los Angeles. By Christopher Weber. SENT: 790 words, photos.

CHINA-POVERTY POLITICS — The ruling Communist Party says its initiatives have helped to lift millions of people out of poverty. But they can require drastic changes, sometimes uprooting whole communities. They fuel complaints the party is trying to erase cultures as it prods minorities to embrace the language and lifestyle of the Han, who are more than 90% of China’s population. By Sam McNeil. SENT: 950 words, photos. 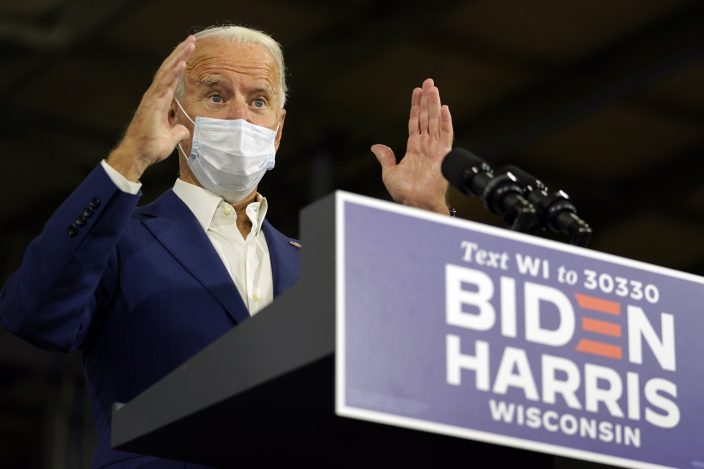 MAYFLOWER 400-PILGRIMS & PLAGUE — Dozens of events — from art exhibits and festivals to lectures and a maritime regatta featuring the Mayflower II, a full-scale replica refitted over the past three years at a cost of more than $11 million — were planned to mark the 400th anniversary of Pilgrims’ arrival at what we now know as Plymouth, Massachusetts. By National Writer Allen G. Breed. SENT: 1,510 words, photos, video. 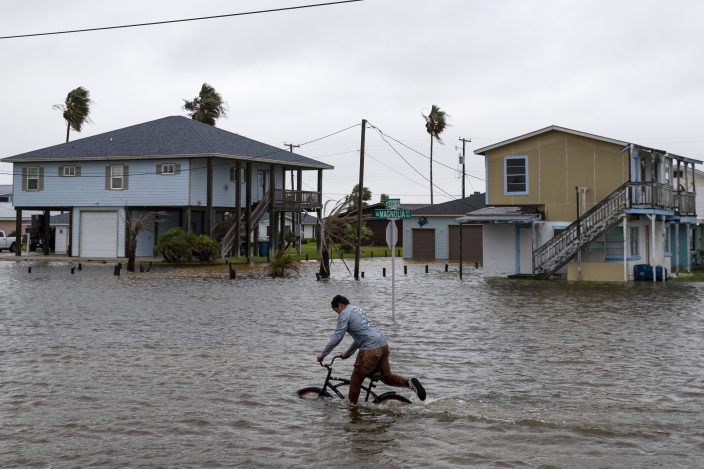 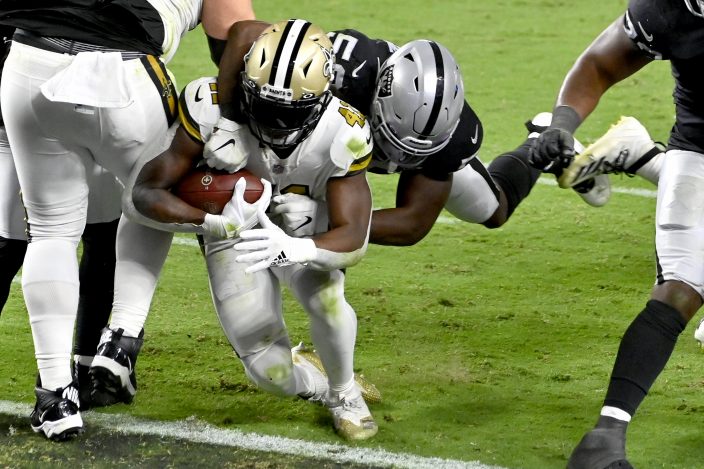 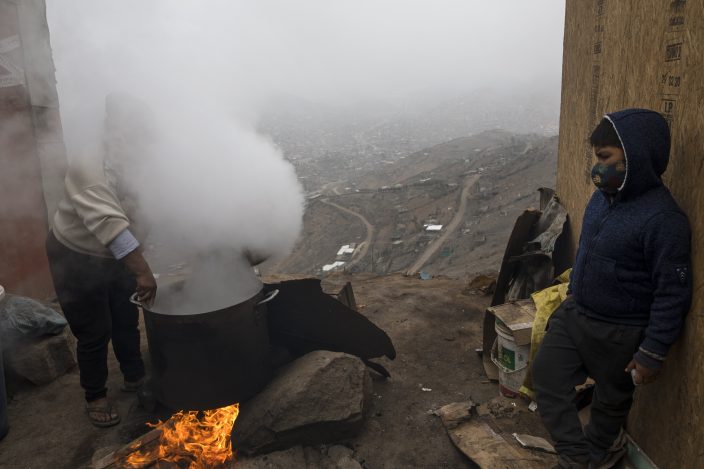 Elena Toribio cooks lentils amid the new coronavirus pandemic at a soup kitchen of the Nueva Esperanza neighborhood, on the outskirts of Lima, Peru, Monday, Sept. 21, 2020. (AP PhotoRodrigo Abd)

SUPREME COURT-SENATE-MAINE — Maine Republican Sen. Susan Collins is again in a pressure cooker over an issue riveting the nation, this time the battle over Trump’s effort to replace the late Justice Ruth Bader Ginsburg on the Supreme Court. SENT: 990 words, photo.

SUPREME COURT-GINSBURG-STYLE — Supreme Court Justice Ruth Bader Ginsburg had a look all her own and clothing became a way she connected with the public and even other members of the court. SENT: 750 words, photo. 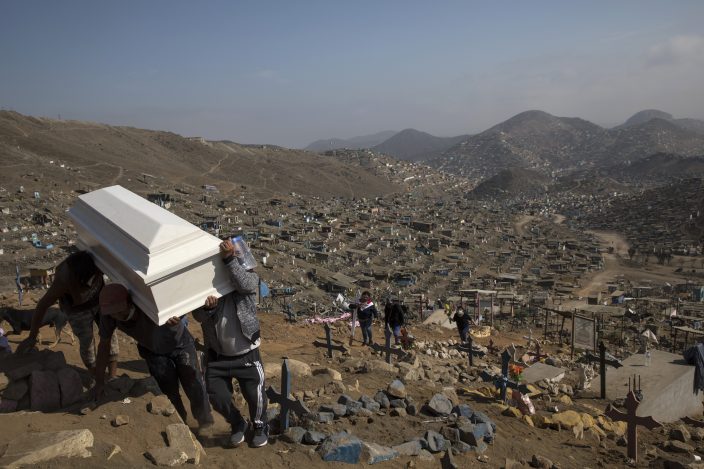 Relatives carry the coffin of a loved one during a burial in the section of the Nueva Esperanza cemetery reserved for COVID-19 cases, in the outskirts of Lima, Peru, Monday, Sept. 21, 2020. (AP PhotoRodrigo Abd)

VIRUS OUTBREAK-AFRICA’S HOPE — The coronavirus pandemic has fractured global relationships, but Africa’s top public health official has helped to steer the continent’s 54 countries into an alliance praised as responding better than some richer nations, including the United States. SENT: 1,030 words, photos. 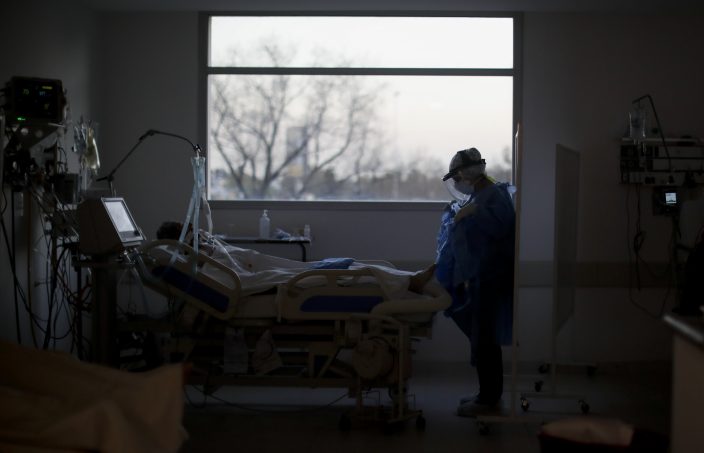 A heath worker tends to a patient in an intensive care unit designated for people infected with COVID-19 at a hospital in Buenos Aires, Argentina, Monday, Sept. 21, 2020. (AP PhotoNatacha Pisarenko)

VIRUS-OUTBREAK-ASIA — President Rodrigo Duterte says he has extended a state of calamity in the entire Philippines by a year to allow the government to draw emergency funds faster to fight the COVID-19 pandemic and harness the police and military to maintain law and order. SENT: 530 words, photos. With VIRUS-OUTBREAK-THE-LATEST.

VIRAL-OUTBREAK-VIRAL-QUESTIONS-KIDS — It appears the coronavirus can spread among children and teens, but how easily may vary by age. SENT: 250 words, graphic.

VIRUS-OUTBREAK-MEDIA-DEBUNKED-STORY — A now-retracted story about coronavirus cases in Nashville, Tennessee, prompts differing responses on the Fox News Channel, which picked up details about the report before it was debunked. SENT: 500 words.

UN-GENERAL-ASSEMBLY-NO-HUMAN-TOUCH — Because of the coronavirus, a key part of U.N. General Assembly diplomacy — the side meetings and whispered conversations where lots of nuance takes place — are gone. By National Writer Ted Anthony. SENT: 1,000 words, photos.

UN GENERAL ASSEMBLY-TRUMP — Trump is set to give a prerecorded address to the U.N. General Assembly as he grapples with the coronavirus pandemic, chilly relations between the U.S. and China and ongoing threats from North Korea and Iran. SENT: 520 words, photo. UPCOMING: 800 words after speech is delivered, timing uncertain.

ELECTION 2020-HARRIS-MICHIGAN — Black voters across Michigan will be pivotal in deciding who will win the battleground state in November, a state that Democratic vice presidential nominee Kamala Harris will be visiting. SENT: 1,080 words, photo.

FEDERAL-EXECUTIONS — A former U.S. soldier who said an obsession with witchcraft led him to slay a Georgia nurse in a bid to lift a spell he believed she put on him is the first of two more inmates the federal government is preparing to put to death this week. By Legal Affairs Writer Michael Tarm. SENT: 700 words, photo.

AFGHANISTAN-SUFI DANCE — A group of young Afghans – both women and men – is coming together in the war-torn capital to practice a mystical Sufi Islamic dance. SENT: 610 words, photo.

TIM DAHLBERG-RAIDERS DEBUT — The newest show just off the Strip at the corner of Al Davis Way and Dean Martin Drive was an instant hit, with Derek Carr and tight end Darren Waller playing pitch and catch most of the night and the Raiders controlling the time of possession in a 34-24 win over New Orleans. By Sports Columnist Tim Dahlberg. SENT: 750 words, photos.

TOKYO-WARY-SPONSORS — The only thing more difficult than staging next year’s Tokyo Olympics in a pandemic might be convincing sponsors to keep their billions of dollars on board in the midst of economic turbulence and skepticism. By Sports Writer Stephen Wade. SENT: 850 words, photo.