Julian Assange is very likely to attempt to attempt to kill himself if he is sent to the United States to face espionage charges, a psychiatric expert said Tuesday at an extradition hearing for the WikiLeaks founder.

Michael Kopelman, emeritus professor of neuropsychiatry at King’s College London, said Assange has a history of depression and there is a “very high” risk of suicide if the U.S. extradition attempt succeeds.

“It’s the imminence of extradition and/or an actual extradition that will trigger the attempt, in my opinion,” Kopelman said during testimony as a witness for Assange at London’s Old Bailey criminal court. 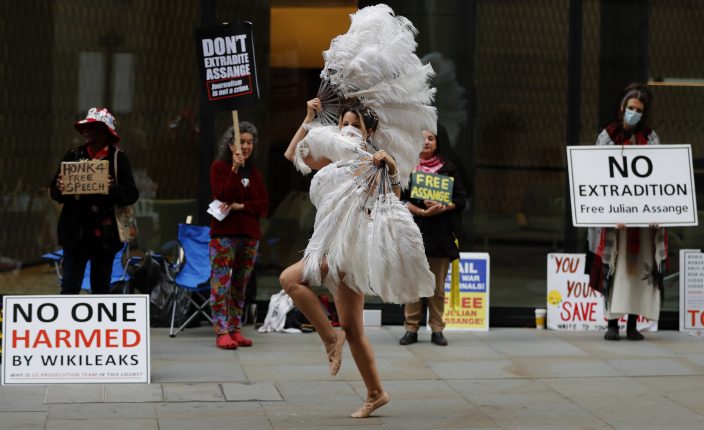 A dancer performs in protest opposite the Central Criminal Court, the Old Bailey, in London, Monday, Sept. 21, 2020, as the Julian Assange extradition hearing to the US continues. (AP PhotoFrank Augstein)

He said there were “an abundance of known risk factors” including a family history of depression and suicide and the isolation Assange has experienced — first in the Ecuadorian embassy in London, where he took refuge in 2012, and since April 2019 in a British prison.

Kopelman said Assange has also been diagnosed with an autism spectrum disorder, which has been associated with an increased tendency to ruminate on suicide.

Under cross-examination by James Lewis, a lawyer representing the U.S. government, Kopelman said he was always alert to the possibility a patient might be “malingering” or exaggerating.

A lorry with a billboard of Julian Assange arrives at the Old Bailey court in London, Monday, Sept. 21, 2020 as the Julian Assange extradition hearing to the US continues. (AP PhotoFrank Augstein)

U.S. prosecutors have indicted Assange on 17 espionage charges and one charge of computer misuse over WikiLeaks’ publication of secret American military documents a decade ago. The charges carry a maximum sentence of 175 years in prison.

Assange’s defense team argues that he is a journalist and entitled to First Amendment protections for publishing leaked documents that exposed U.S. military wrongdoing in Iraq and Afghanistan.

They also say the conditions he would face in a U.S. prison would breach his human rights.

The extradition hearing began Sept. 7 and is due to last until early October, with Judge Vanessa Baraitser likely to take weeks or months to consider her decision.

Lawyer says Trump victory in Nov will be worse for Assange

Pentagon Papers leaker comes to the defense of Assange

US lawyer says Assange faces decades in prison if convicted