A wildfire scorching its way through brush and timber from the mountains to the desert northeast of Los Angeles threatened more than 1,000 homes on Tuesday as crews across the West battled dozens of other major blazes.

The Bobcat Fire was advancing at a mile or two an hour at times and continued to threaten the Mojave Desert town of Pearblossom after burning into the Antelope Valley foothill area, on the other side of the San Gabriel Mountains from Los Angeles.

The blaze that began Sept. 6 destroyed or damaged at least 29 homes and other buildings, including some in the Juniper Hills area, with the toll rising to perhaps 85 when damage assessment teams can complete their work this week, authorities said. 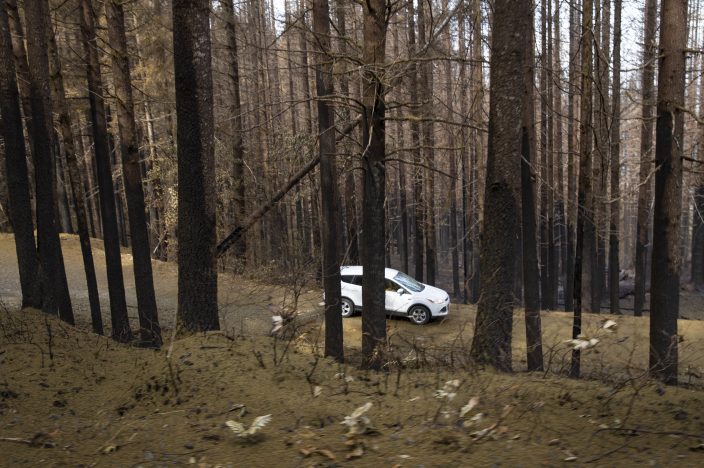 A vehicle moves through a burned area of the Holiday Farm Fire, east of Springfield, Ore., Monday Sept. 21, 2020. (Chris PietschThe Register-Guard via AP)

“That fire came over the hill so hard and fast that I turned around and I barely got my eight dogs and my two parrots out,” Poindexter told ABC7. “You can see everything is ash.”

Firefighters also battled flareups near Mount Wilson, which overlooks greater Los Angeles and has a historic observatory founded more than a century ago and numerous broadcast antennas serving Southern California. 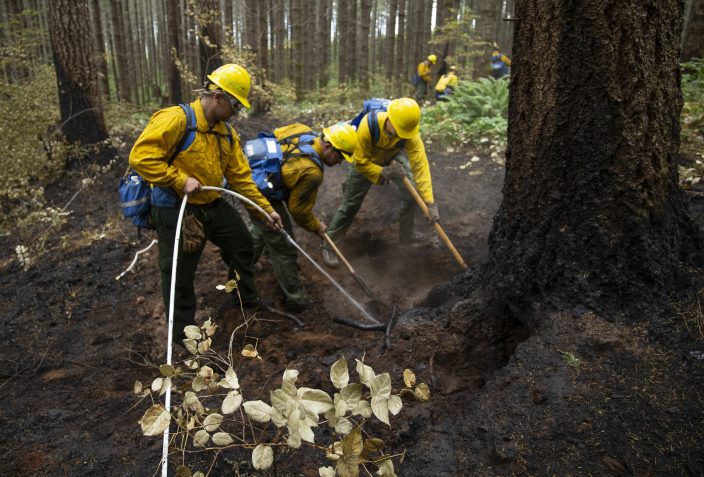 The fire was fueled by vegetation that hadn't burned in decades and pushed by erratic winds over the weekend, although they had died down by Monday, and were expected to remain light through Tuesday.

Near Mount Wilson, firefighters set more than a mile of fires designed to burn out the blaze's fuel and act as a brake on its advance.

However, with the fire only 13% contained, firefighters weren't taking anything for granted. Officials revised the containment number down from 15% after the blaze grew. 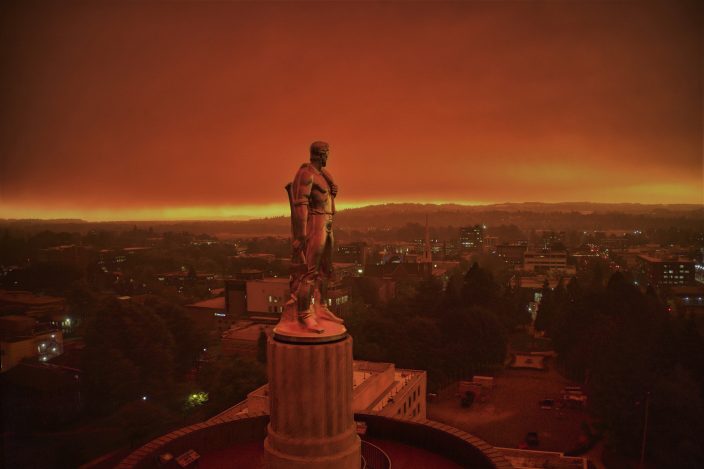 This drone photo provided by Michael Mann shows the Oregon Capitol building, with its "Oregon Pioneer" bronze sculpture atop the dome, with skies filled with smoke and ash from wildfires as a backdrop in Salem, Ore., on Sept. 8, 2020. Fires continued to rage across the West Coast on Monday, Sept. 21, 2020. (Michael Mann via AP)

“We’ve got a fire here that is bigger than the city of Denver, and it did it in two weeks,” said Sky Cornell with the Los Angeles County Fire Department.

Evacuation warnings — meaning residents should be prepared to flee if ordered — remained in effect for the L.A. suburb of Pasadena, home of the Rose Bowl and the annual Rose Parade, and Wrightwood, a mountain community near several San Bernardino County ski resorts.

Cheryl Poindexter returns to her property on Monday, Sept. 21, 2020 after the Bobcat fire burned her home of 27 years and the 11 acre property where she ran an animal rescue in Juniper Hills, Calif. as her friend Dale Burton, of Leona Valley, tries to put out the fire that continues to smolder in her septic. (Sarah ReingewirtzThe Orange County Register via AP)

The blaze was one of more than two dozen major wildfires burning across California, including five of the largest in state history.

More than 5,600 square miles (14,500 square kilometers) have been charred, an area larger than the state of Connecticut, and at least 23,00 people remain evacuated statewide, Gov. Gavin Newsom said.

Early estimates are that 6,400 buildings have been destroyed across the state, but Newsom said “by no stretch of the imagination do we think this tells the entire story.” Damage assessments are ongoing, he said.

Dale Burton, of Leona Valley, tries to put out the fire that continues to smolder at his friend Cheryl Poindexter's property on Monday, Sept. 21, 2020 after the Bobcat fire burned her home of 27 years and the 11 acre property where she ran an animal rescue in Juniper Hills, Calif. (Sarah ReingewirtzThe Orange County Register via AP)

Numerous studies in recent years have linked bigger U.S. wildfires to global warming from the burning of coal, oil and gas, especially because climate change has made California much drier. A drier California means plants are more flammable.

Nearly 19,000 firefighters in California are currently battling 27 major blazes, Newsom said. At least 7,900 wildfires have erupted in the state this year, many during a mid-August barrage of dry lightning that ignited parched vegetation.

Twenty-six people have been killed. Officials were investigating the death of a firefighter at another Southern California wildfire that erupted earlier this month from a smoke-generating pyrotechnic device used by a couple to reveal their baby’s gender. 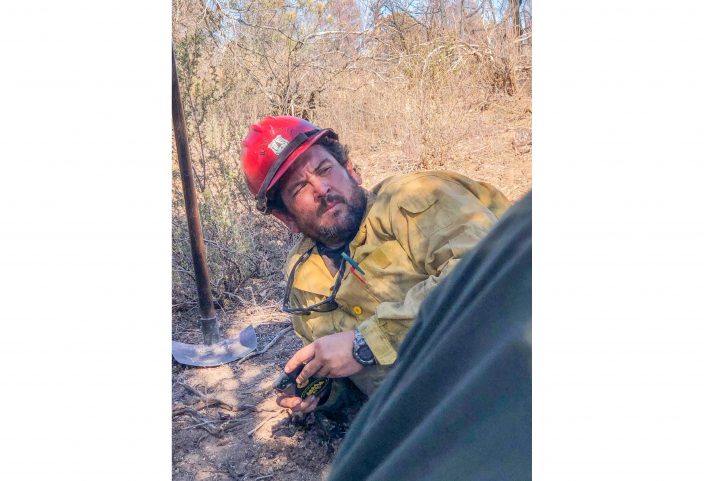 Morton, was a 14-year veteran of the U.S. Forest Service and a squad boss with the Big Bear Interagency Hotshot Crew of the San Bernardino National Forest.

“Charlie was a well-respected leader who was always there for his squad and his crew at the toughest times,” said U.S. Forest Service Chief Vicki Christiansen. 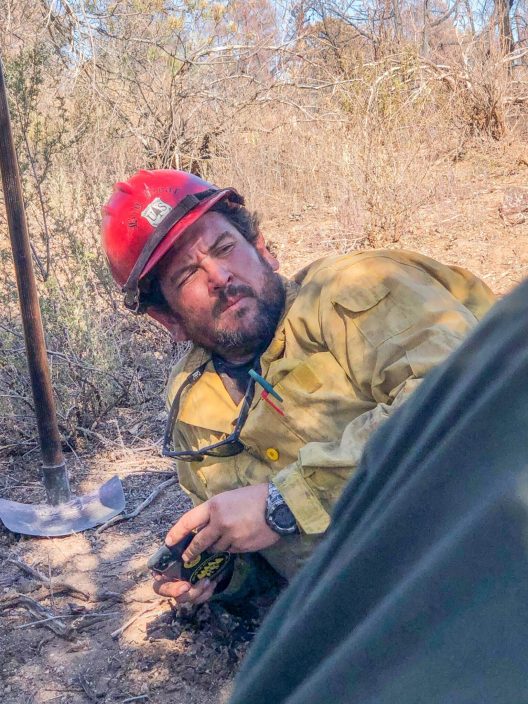 “Charlie is survived by his wife and daughter, his parents, two brothers, cousins, and friends. He’s loved and will be missed. May he rest easy in heaven with his baby boy,” Morton’s family said in a statement.

In Wyoming, officials warned that “a high probability for fire growth" exists for a blaze burning toward cabins and an important water supply reservoir that’s a major source of water for the state’s capital city, Cheyenne. The Mullen Fire in the Medicine Bow National Forest is burning in heavily forested, rugged terrain that would usually be busy now with hunters at the start of elk hunting season.

And in Colorado, one of the state’s largest wildfires continued to grow slowly, with firefighters benefiting as the flames spread into flatter ground Monday. Still, the Cameron Peak Fire near Red Feather Lakes had covered 162.7 square miles (421.39 square kilometers) and was just 15% contained. At higher elevations, it devoured many lodgepole pine trees killed by a beetle infestation.

More than 9,000 firefighters continue to battle large wildfires across Oregon and Washington, where thousands of residences have been destroyed, the Pacific Northwest Region of the Forest Service said.