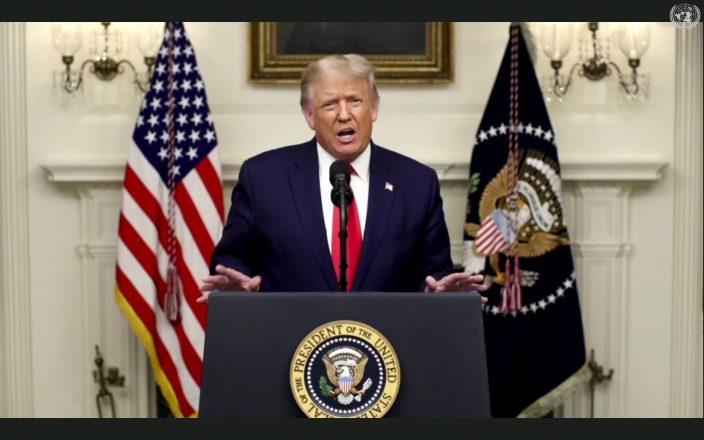 In this image made from UNTV video, United States President Donald Trump speaks in a pre-recorded message which was played during the 75th session of the United Nations General Assembly, Tuesday, Sept. 22, 2020, at U.N. headquarters in New York. The U.N.'s first virtual meeting of world leaders started Tuesday with pre-recorded speeches from some of the planet's biggest powers, kept at home by the coronavirus pandemic that will likely be a dominant theme at their video gathering this year. (UNTV via AP) 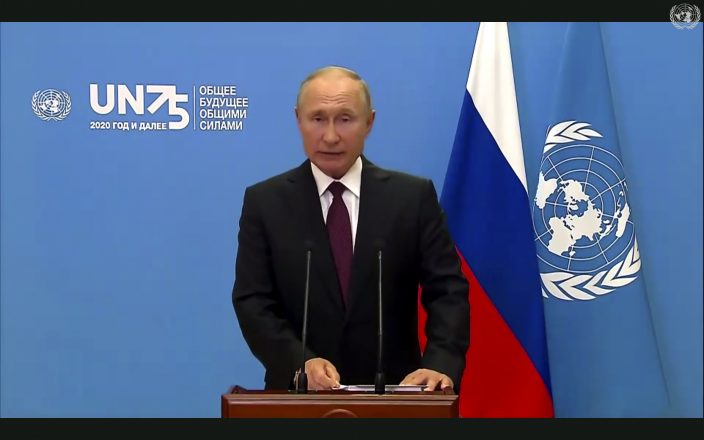 In this image made from UNTV video, Russian President Vladimir Putin, speaks in a pre-recorded message which was played during the 75th session of the United Nations General Assembly, Tuesday, Sept. 22, 2020, at UN headquarters. The U.N.'s first virtual meeting of world leaders started Tuesday with pre-recorded speeches from some of the planet's biggest powers, kept at home by the coronavirus pandemic that will likely be a dominant theme at their video gathering this year. (UNTV via AP) 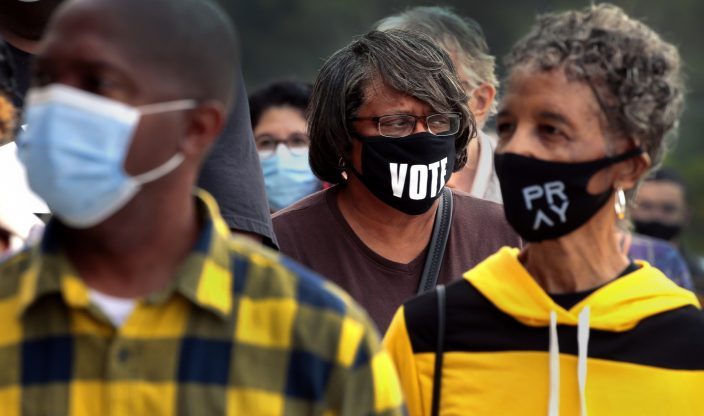 Sharon Hayes, center, a poll judge in the general election, and Joyce Rollins, right, wait in line to vote outside the St. Louis County Board of Elections in St. Ann, Mo., on the first day of in-person absentee voting in Missouri on Tuesday, Sept. 22, 2020. (Robert CohenSt. Louis Post-Dispatch via AP)

SUPREME COURT-VACANCY — Senate Republicans swiftly fall in line behind President Donald Trump’s push to fill the late Justice Ruth Bader Ginsburg’s seat on the Supreme Court over Democratic protests it’s too close to the election. With support from one of the GOP holdouts, Sen. Mitt Romney, Trump appears all but certain to have the votes to confirm his pick. By Lisa Mascaro, Zeke Miller and Jonathan Lemire. SENT: 1200 words. UPCOMING: Developing, 1000 words by 5 p.m., photos. With: SUPREME COURT-VACANCY-THE LATEST, developing. With: SUPREME COURT-CHANGES — The prospect that President Donald Trump and Senate Republicans will try to fill Justice Ruth Bader Ginsburg’s Supreme Court seat before the year is out has ignited a call for major changes on the court, including expanding the number of justices. By Mark Sherman. UPCOMING: 800 words by 2:30 p.m., photos.

WESTERN WILDFIRES-SPECIAL PLACES — Oregonians are grieving the loss of some of their most treasured natural places to wildfires. The flames wiped out campgrounds, hot springs and wooded retreats that have been touchstones for generations in a state known for its unspoiled beauty. The same fires that destroyed hundreds of homes and killed at least nine people also encroached on beloved state parks, scorched some of Oregon’s best-known hiking trails and raged through a whitewater rafting mecca. By Gillian Flaccus. SENT: 930 words, photos.

UN-GENERAL-ASSEMBLY — Secretary-General Antonio Guterres warned the U.N.’s first-ever virtual meeting of global leaders Tuesday that the world is facing an “epochal” health crisis, the biggest economic calamity and job losses since the Great Depression, threats to human rights and worries of a new Cold War between the U.S. and China. The meeting got underway with remote speeches from some of the planet’s biggest powers — the United States, China, Russia and Iran among them. By Jennifer Peltz and Edith M. Lederer. SENT: 640 words, photos. Developing. 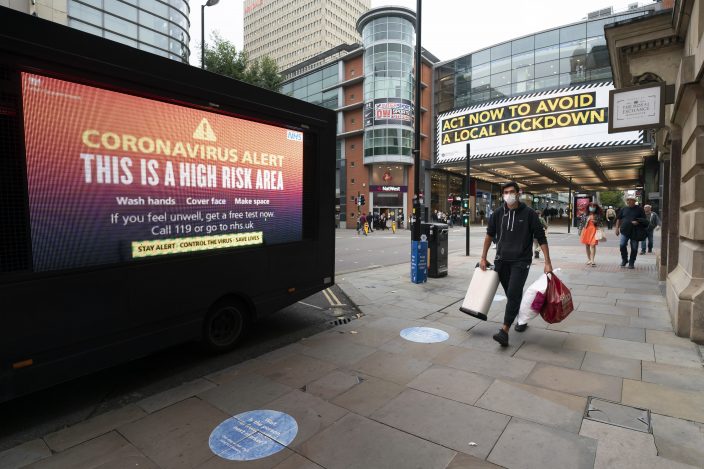 Members of the public are seen by public information messages in central Manchester after Prime Minister Boris Johnson set out new restrictions to last "perhaps six months" to slow the renewed spread of coronavirus, Manchester, England, Tuesday Sept 22, 2020. The UK has reached "a perilous turning point", Boris Johnson said as he set out a raft of new coronavirus restrictions for England. ( AP PhotoJon Super)

RACIAL-INJUSTICE-BREONNA-TAYLOR — Police in Kentucky’s largest city have begun preparing for another round of protests and possible unrest as the city nervously awaits the state attorney general’s announcement about whether he will charge officers in Breonna Taylor’s shooting death. SENT: 480 words, photo.

VIRUS OUTBREAK-BRITAIN — British Prime Minister Boris Johnson has slammed the brakes on the country’s return to offices, saying people should work from home if possible to help slow the spread of the coronavirus. Johnson on Tuesday announced a package of new restrictions, including a requirement for pubs, restaurants and other hospitality venues in England to close between 10 p.m. and 5 a.m. SENT: 780 words, photos.

VIRUS-OUTBREAK-VIRUS-DIARY — After months of avoiding airplanes and hospitals, this Brazil-based writer rushed headlong toward both. His father had fallen into a coma, and worsening prognoses meant that there was little time left for he and his three brothers to make it home. SENT: 600 words, photo.

EUROPE-COVID-APPS — Mobile apps tracing new COVID-19 cases have not been widely adopted due to privacy concerns, technical problems and lack of interest from the public. By Business Writer Kelvin Chan. SENT: 1,090 words, photos.

VIRUS OUTBREAK-ISRAEL — Israelis are bracing for more coronavirus restrictions days after the start of a second countrywide lockdown. Health officials are sounding the alarm over a feared deluge of new patients, and hospitals have been ordered to open additional wards. SENT: 460 words, photos.

VIRUS OUTBREAK-AFRICA’S HOPE — The coronavirus pandemic has fractured global relationships, but Africa’s top public health official has helped to steer the continent’s 54 countries into an alliance praised as responding better than some richer nations, including the United States. SENT: 1,030 words, photos.

VIRUS-OUTBREAK-VIRAL-QUESTIONS-KIDS — It appears the coronavirus can spread among children and teens, but how easily may vary by age. SENT: 250 words, graphic.

SUPREME COURT-VACANCY-LARSEN — Joan L. Larsen climbed so quickly through the conservative legal ranks that it even surprised her at times. By Ryan J. Foley. UPCOMING: 900 words by 4 p.m., photo.

SUPREME COURT-VACANCY-ROMNEY — Mitt Romney is having his Republican homecoming moment. The Utah Republican and 2012 GOP presidential nominee infuriated President Donald Trump and Republicans with his impeachment vote, but his decision clearing the way for a vote on Trump’s Supreme Court pick quickly had “He’s a Republican” trending on Twitter. By Laurie Kellman. UPCOMING: 700 words by 5 p.m., photos, video

SUPREME COURT-VACANCY-SENATE-MAINE — Maine Republican Sen. Susan Collins is again in a pressure cooker over an issue riveting the nation, this time the battle over Trump’s effort to replace the late Justice Ruth Bader Ginsburg on the Supreme Court. SENT: 990 words, photo.

UN-GENERAL ASSEMBLY-TRUMP — President Donald Trump demands that the United Nations hold China accountable for the coronavirus pandemic as he defends his own handling of COVID-19 in America where the death toll is nearing 200,000. By Deb Riechmann. SENT: 640 words, photos.

WHITE HOUSE-RICIN — A woman suspected of trying to send envelopes containing the poison ricin to the White House and to law enforcement agencies in Texas is expected to appear in a federal court in Buffalo, N.Y., after being detained at a border crossing. SENT: 230 words, photo. Developing from 4 p.m. hearing, 500 words by 6 p.m.

CONGRESS-GOVERNMENT FUNDING — Democrats controlling the House hope to pass a government-wide temporary funding bill that would keep federal agencies running into December and prevent a partial government shutdown, but a dispute over farm subsidies is threatening to delay passage. By Andrew Taylor. SENT: 845 words. UPCOMING: Developing, 890 words by 5 p.m., photos.

TRUMP-CENSUS ORDER — The Trump administration is asking the Supreme Court for fast action on its effort, blocked by a lower court, to exclude people in the U.S. illegally from the numbers used to determine how many congressional seats each state gets. By Mark Sherman. SENT: 413 words, photo.

ELECTION 2020-CATHOLIC VOTERS — For decades, Roman Catholic voters have been a pivotal swing vote in U.S. presidential elections. Nearly every time, a majority of them have backed the winner — whether Republican or Democrat. How they vote in key battleground states this year could well decide the outcome, and both campaigns are targeting them with fervent appeals to vote based on their faith. SENT: 1,200 words, photos.

TROPICAL-WEATHER — Beta has weakened to a tropical depression as it parked itself over the Texas coast, raising concerns of extensive flooding in Houston and areas further inland. SENT: 800 words, photos, video. With: TROPICAL WEATHER-PROTECTION PLAN-TEXAS — The near miss by Hurricane Laura last month has Texas officials again pushing for the construction of a long discussed coastal barrier system to protect against hurricanes and powerful storms. UPCOMING: 800 words by 4 p.m., photos.

WESTERN-WILDFIRES — A wildfire scorching its way through brush and timber from the mountains to the desert northeast of Los Angeles threatens more than 1,000 homes as crews across the West battled dozens of other major blazes. SENT: 790 words, photos.

FELONS-VOTING-FLORIDA — Billionaire Mike Bloomberg is helping Florida felons pay their debts so they can vote in the presidential election. SENT: 400 words, photo.

MAYFLOWER 400-PILGRIMS & PLAGUE — Dozens of events — from art exhibits and festivals to lectures and a maritime regatta featuring the Mayflower II, a full-scale replica refitted over the past three years at a cost of more than $11 million — were planned to mark the 400th anniversary of Pilgrims’ arrival at what we now know as Plymouth, Massachusetts. By National Writer Allen G. Breed. SENT: 1,510 words, photos, video.

FEDERAL-EXECUTIONS — A former U.S. soldier who said an obsession with witchcraft led him to slay a Georgia nurse in a bid to lift a spell he believed she put on him is the first of two more inmates the federal government is preparing to put to death this week. By Legal Affairs Writer Michael Tarm. SENT: 700 words, photo.

LEBANON-EXPLOSION — A powerful explosion shook a Hezbollah stronghold in southern Lebanon, sending thick grey smoke billowing over the village, but the cause was not clear. SENT: 530 words, photo.

GERMANY-ANTI-SEMITISM — In a report released Tuesday, the Department for Research and Information on Anti-Semitism Berlin, or RIAS, documented 410 incidents — more than two a day — during the first half of 2020. SENT: 990 words, photos.

NOBEL-PEACE PRIZE — The award ceremony for the 2020 Nobel Peace Prize, traditionally held at the Oslo city hall on Dec. 10, will instead be held in scaled-down form at the city’s university because of the coronavirus outbreak. SENT: 440 words.

BKN--LAKERS-NUGGETS — The Los Angeles Lakers try to move within a victory of their first NBA Finals appearance in a decade when they play Game 3 of the Western Conference finals against the Denver Nuggets. UPCOMING: 700 words, photos. Game starts 9 p.m.