Philippines President Rodrigo Duterte defended his drug crackdown, dismissed criticism from human rights advocates and underscored his country's claims in the South China Sea as the sometimes aggressive critic of the United Nations addressed its annual gathering of world leaders for the first time Tuesday.

But with the coronavirus taking a human and economic toll on the Philippines, the often brash Duterte also struck a somewhat conciliatory tone about the organization he has often criticized and at times threatened to leave.

“The Philippines values the role that the United Nations plays in its fight against the pandemic,” Duterte said in a prerecorded video, the meeting's format this year because of the pandemic. 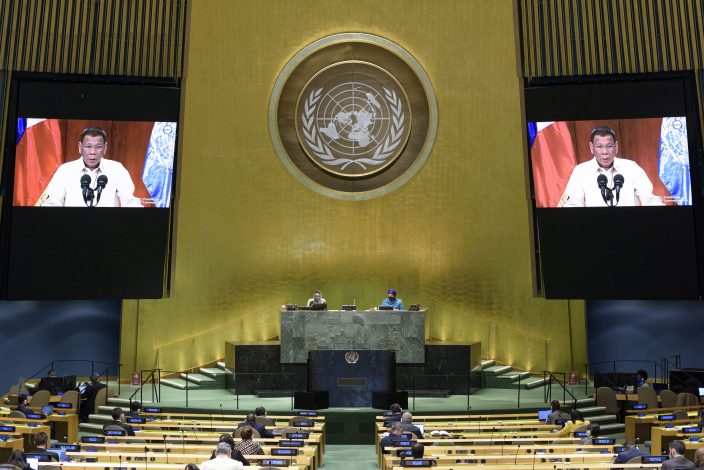 In this photo provided by the United Nations, the President of the Republic of the Philippines, Rodrigo Roa Duterte's pre-recorded message is played during the 75th session of the United Nations General Assembly, Tuesday, Sept. 22, 2020, at U.N. headquarters. The U.N.'s first virtual meeting of world leaders started Tuesday with pre-recorded speeches from some of the planet's biggest powers, kept at home by the coronavirus pandemic that will likely be a dominant theme at their video gathering this year. (Manuel EliasUN Photo via AP)

He welcomed the U.N.'s launch of a relief fund and called on the international community to make sure potential vaccines are accessible to all. At the same time, Duterte spotlighted Filipino health care workers' contribution to the virus fight at home and around the globe.

Duterte, who took office in 2016, often lashes out at what he decries as international meddling in Philippine domestic affairs. Western governments and human rights groups see it as expressing justifiable alarm about an anti-drug crusade that has left more than 5,700 mostly poor suspects dead.

U.N. High Commissioner for Human Rights Michelle Bachelet said in June that the Philippines' “campaign against illegal drugs is being carried out without due regard for the rule of law, due process and the human rights of people who may be using or selling drugs.” Her office called on the government to end all violence targeting suspected drug offenders.

Duterte has denied authorizing extrajudicial killings but has repeatedly and openly threatened drug dealers with death. Just this month, he publicly ordered the country’s top customs official to shoot and kill drug smugglers. The International Criminal Court opened a preliminary probe in February 2018 into complaints about the killings; Duterte’s government responded by withdrawing from the court.

“The Philippines will continue to protect the human rights of its people, especially from the scourge of illegal drugs, criminality and terrorism,” Duterte told the assembly Tuesday, complaining that “interest groups have weaponized human rights” to discredit his government.

He expressed openness Tuesday to “constructive engagement" with the U.N., but only if there is “objectivity, noninterference, nonselectivity and genuine dialogue.”

Duterte also pointed to the South China Sea, where Beijing's sweeping territorial claims have set off disputes with several neighboring countries and the United States.

“We firmly reject attempts to undermine” a 2016 arbitration ruling that invalidated most of China’s claims, Duterte said. China refused to participate in the arbitration by a U.N.-backed tribunal, dismissed the ruling as a “sham” and continues to defy it.

On a larger scale, Duterte lamented that tensions among major powers are intensifying.

“When elephants fight, it is the grass that gets trampled flat,” he said, imploring countries with interests in the South China Sea and other global flashpoints: “If we cannot be friends as yet, then in God’s name, let us not hate each other too much.”