The first one was early in the week, when he played a practice round at Winged Foot with Phil Mickelson. By then, DeChambeau already was sold on his plan of hitting driver every chance he could because it would be difficult for him and everyone else to hit many fairways.

But it was during that practice round that Mickelson shared his experiences from 2006, when Lefty hit only one fairway in the final round and still nearly won. 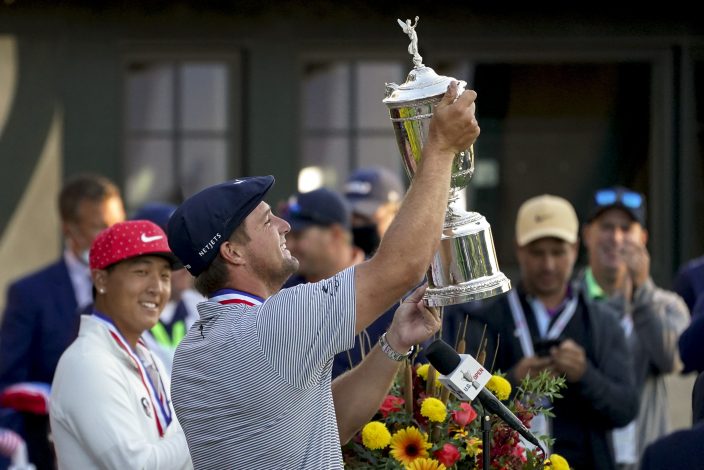 “He said, ‘In 2006, I had the best short-game week of my life,’ and that really stuck out to me for some reason,” DeChambeau said. “But I just knew that if I did hit it in the rough, I'm going to have to get it up-and-down quite a bit. So I made sure that I needed to practice those shots coming into the week, and I did that beautifully.”

He cited the 14th hole Sunday, when he went from the left rough to shaggy grass below the green. His chip was one of the best of the final round, leaving him a 6-foot par putt he made.

The other was after he finished with a bogey on Saturday for a 70 — his only round that wasn't under par — to fall two shots behind Matthew Wolff. DeChambeau headed to the range and stayed there until well past 8 p.m., in the dark with floodlights on, trying to find a swing with the driver that had deserted him. 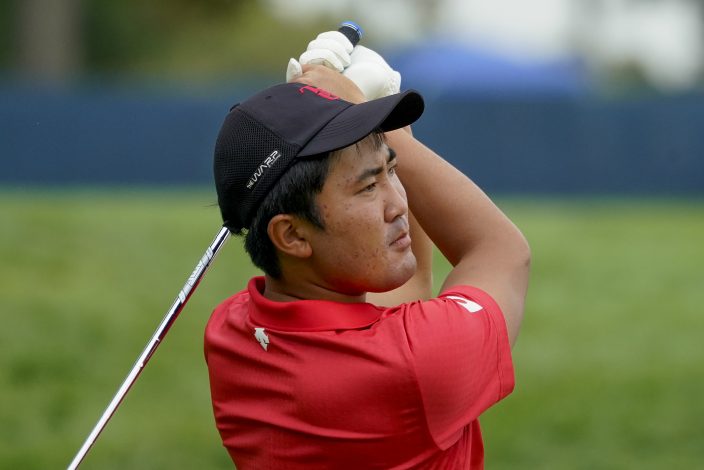 Takumi Kanaya, of Japan, plays his shot from the 13th tee during the first round of the US Open Golf Championship, Thursday, Sept. 17, 2020, in Mamaroneck, N.Y. (AP PhotoCharles Krupa)

“When he got done on Saturday, he didn't hit it great,” swing coach Chris Como said. "He came off the course and I said, ‘That was the round of a champion right there.’ It's the round you have to grind and fight for on every shot. That showed heart. He didn't have his good stuff.

“I told him what I saw, and he found a good feel for it (Saturday) night.”

What did he find? 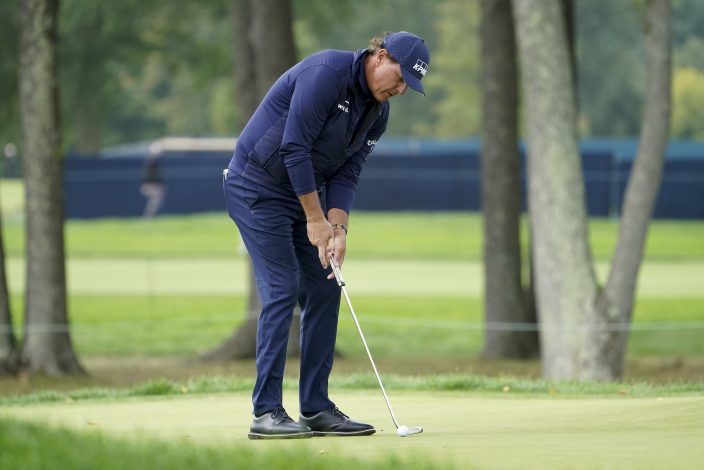 Phil Mickelson, of the United States, putts on the second green during the second round of the US Open Golf Championship, Friday, Sept. 18, 2020, in Mamaroneck, N.Y. (AP PhotoJohn Minchillo)

“My left arm wasn't holding and being stable enough through impact,” DeChambeau said. “It was just rolling over. That's why I was drawing it and hooking it a little bit.”

He found another adjustment on the short par-4 sixth hole, and he was on his way.

The PGA Tour stop in the Dominican Republic should be a candidate for comeback tournament of the year.

Consider the chronology. It was among the first events to be canceled because of the coronavirus pandemic. The Corales Puntacana Resort and Club Championship was supposed to be opposite the Match Play.

Then, it was moved to the same week as the Ryder Cup, which was scheduled for Sept. 25-27. And when the Ryder Cup was postponed until 2021, suddenly Punta Cana had the weekend to itself as a full FedEx Cup event.

It will be on network TV this weekend because NBC had this time set aside for the Ryder Cup. And because it offers full FedEx Cup points, the winner goes to the Masters next year.

And to think this was a Korn Ferry Tour event three years ago.

The LPGA Tour had a 34-tournament schedule to start the year. And then the COVID-19 pandemic happened, shutting down the LPGA Tour for five months. With tournament cancellations and postponements, that leaves 17 events on the schedule this year.

“Definitely more than two,” Hurst said. “I think four would be great. I don’t know if we’ll get that. Who knows? ... Let’s keep our fingers crossed and see if we can get four.”

The U.S. team takes the leading eight qualifiers through a points system, two from the world ranking and two captain’s picks.

Europe already has made the adjustment, with Catriona Matthew now getting six captain’s picks instead of four. Two players come off a Ladies European Tour points list and four from the world ranking.

“We just felt with the players not playing as much and all the schedules being up in the air that it was just nice to do that and give you a bit more options and what you might do going forward next year,” Matthew said.

The Solheim Cup is Sept. 4-6 at Inverness Club in northwest Ohio, three weeks before the Ryder Cup in Wisconsin. U.S. captain Steve Stricker had his system changed to six picks this year, although the American team is in the process of updating its qualifying system with the matches postponed a year.

Jack Nicklaus has waived the design fee for his latest golf course renovation so it could be donated to a project aimed at providing scholarships to spouses and children of American service members who are disabled or lost their lives.

American Dunes golf Club in Grand Haven, Michigan, opens next week and Nicklaus will be there. It previously was Grand Haven Golf Club, a tight, tree-lined course that opened more than 50 years ago and was closed in 2018.

Lt. Col. Dan Rooney, a PGA professional and former F-16 pilot in the Oklahoma Air National Guard, discussed the concept with Nicklaus two summers ago. Nicklaus loved the idea and converted the course into a dunes course with wide fairways on the eastern shore of Lake Michigan.

Rooney was on a flight from Chicago to Grand Rapids, Michigan, in 2017 with a fallen service member aboard when the idea of Folds of Honors was hatched. All profits from American Dunes will be given to the Folds of Honor Foundation. To date, the foundation has provided $140 million toward 28,000 scholarships.

The logo for the course? A golden bear with stars and stripes.

Takumi Kanaya missed the cut by one shot at the U.S. Open and still goes home with a medal. The 22-year-old from Japan won the Mark H. McCormack Medal as the leading player in the world amateur golf ranking.

Kanaya has played so well this year that he’s also at No. 241 in the overall world ranking. In the last 12 months, he has won the Taiheiyo Masters on the Japan Golf Tour, tied for third in the Australian Open and tied for fifth in the Fujisankei Classic in Japan.

The U.S. Open was his third major, along with the Masters (tie for 58th) and a missed cut at Royal Portrush last year in the British Open.

“I am extremely happy and excited because receiving the McCormack Medal was the biggest goal that I have set in my amateur golf career,” Kanaya said.

His big goal is move high enough in the world ranking to have a chance at playing in the Olympics next summer in Tokyo.

The KPMG Women's PGA Championship on Oct. 8-11 at Aronimink will not have spectators. Neither the LPGA Tour nor the PGA Tour, or the majors they play, have had fans this year. The only spectators in the U.S. have been on the PGA Tour Champions in South Dakota. ... Sam Horsfield of England, who played his college golf at Florida, is playing the PGA Tour event in the Dominican Republic on a sponsor exemption. Horsfield had to withdraw from the U.S. Open last week after a positive test result for the coronavirus. ... Xander Schauffele now has seven top-10 finishes in his 13 appearances in major championships.

Americans have won the U.S. Open six straight years, their longest streak since 12 in a row from 1982 through 1993.