Saudi Arabia on Tuesday said Muslims will be allowed to perform the smaller, year-round pilgrimage starting Oct. 4 as the kingdom gradually begins lifting restrictions that had been in place on Islam's holiest site for the past seven months due to the coronavirus.

State media reported the government plans to allow up to 6,000 visitors a day at the sprawling Grand Mosque in Mecca, which will be open to Saudi citizens and residents only during this first phase.

Before visitors can enter the mosque to pray or perform the “umrah” pilgrimage, they will have to apply and reserve a specific time and date through an online application that is launching Sept. 27 to avoid crowding and maintain social-distancing guidelines. Visitors can also select via the app their means of transportation and meeting points. 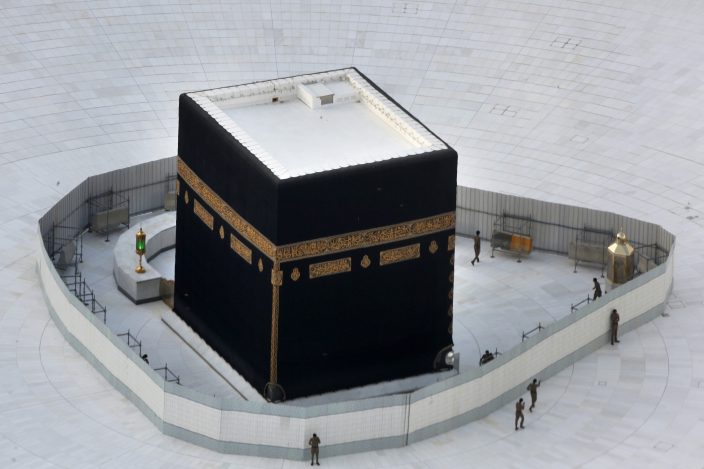 FILE- In this March 6, 2020 file photo, Saudi policemen guard the the Kaaba, the cubic building at the Grand Mosque, in the Muslim holy city of Mecca, Saudi Arabia. The confirmed death toll from the coronavirus has gone over 50,000 in the Middle East as the pandemic continues. That's according to a count Thursday, Sept. 3, 2020, from The Associated Press, based on official numbers offered by health authorities across the region. (AP PhotoAmr Nabil, File)

The second phase launches Oct. 18, allowing a maximum of 15,000 pilgrims and 40,000 in for prayer from among residents and citizens based on allocated times via the app.

The Grand Mosque houses the cube-shaped Kaaba that observant Muslims pray toward five times a day.

Muslim travelers from outside Saudi Arabia could be allowed to perform the “umrah” pilgrimage as early as Nov. 1, the Interior Ministry said in a statement. Saudi Arabia recently began easing some restrictions on international flights for the first time since March.

The ministry said it will continuously evaluate these guidelines and developments related to the pandemic.

The kingdom held a dramatically downsized, symbolic hajj pilgrimage in July due to concerns that it could easily have become a global super-spreader event for the virus. Pilgrims were selected after applying through an online portal and all were residents or citizens of Saudi Arabia. Rather than the more than 2 million pilgrims the kingdom hosts for the annual event, as little as 1,000 took part after being tested for the virus and quarantined.

Despite taking early and sweeping measures to contain the virus, Saudi Arabia has recorded more than 330,000 cases, including more than 4,500 deaths.