“I did the best I could,” President Donald Trump said.

Huddled with aides in the West Wing last week, his eyes fixed on Fox News, Trump wasn’t talking about how he had led the nation through the deadliest pandemic in a century. In a conversation overheard by an Associated Press reporter, Trump was describing how he’d just publicly rebuked one of his top scientists — Dr. Robert Redfield, a virologist and head of the U.S. Centers for Disease Control and Prevention.

Redfield had angered the president by asserting that a COVID-19 vaccine wouldn’t be widely available until late 2021. So hours later, with no supporting evidence, Trump called a news conference to say Redfield was “confused.” A vaccine, Trump insisted, could be ready before November’s election. 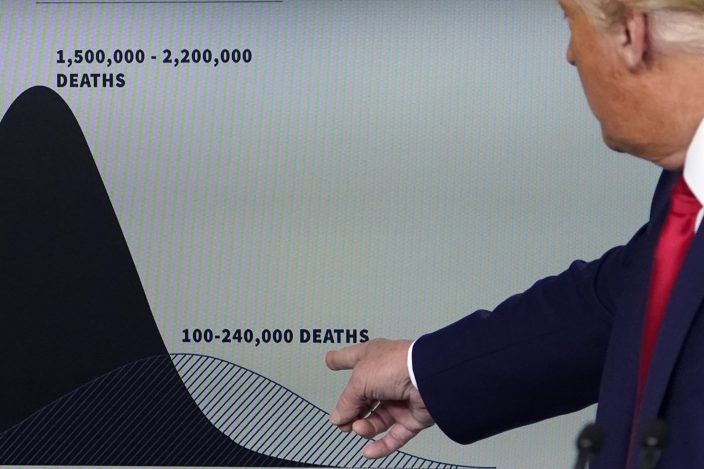 Mission accomplished: Fox was headlining Trump’s latest foray in his administration’s ongoing war against its own scientists.

It is a war that continues unabated, even as the nation's COVID-19 death toll has reached 200,000 — nearly half the number of Americans killed in World War II, a once unfathomable number that the nation’s top doctors just months ago said was avoidable.

Over the past six months, the Trump administration has prioritized politics over science at key moments, refusing to follow expert advice that might have contained the spread of the virus and COVID-19, the disease it causes. Trump and his people have routinely dismissed experts’ assessments of the gravity of the pandemic, and of the measures needed to bring it under control. They have tried to muzzle scientists who dispute the administration’s rosy spin. 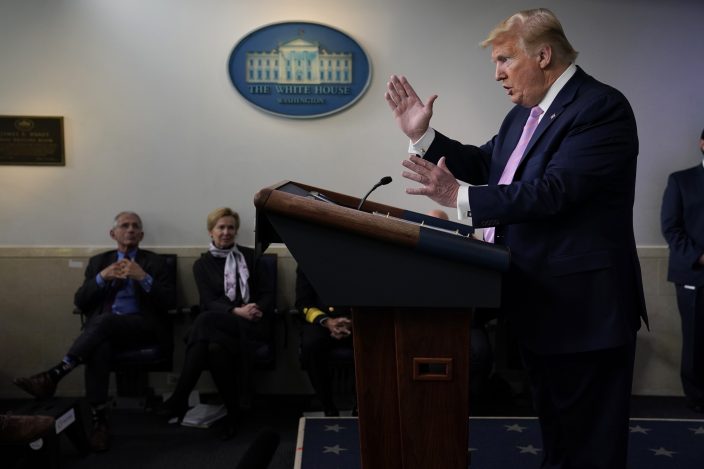 While there is no indication that Trump’s desperation for a vaccine has affected the science or safety of the process, his insistence that one would be ready before the election is stoking mistrust in the very breakthrough he hopes will help his reelection.

Today, he is pushing hard for a resumption of normal activity and trying to project strength and control to bolster his political position in his campaign against Democrat Joe Biden.

In hindsight, Trump says, there’s nothing he would have done differently, citing his early move to restrict travel from China — a move that data and records show was ineffective. Still, he gives himself high marks on his handling the pandemic — except for bad messaging. 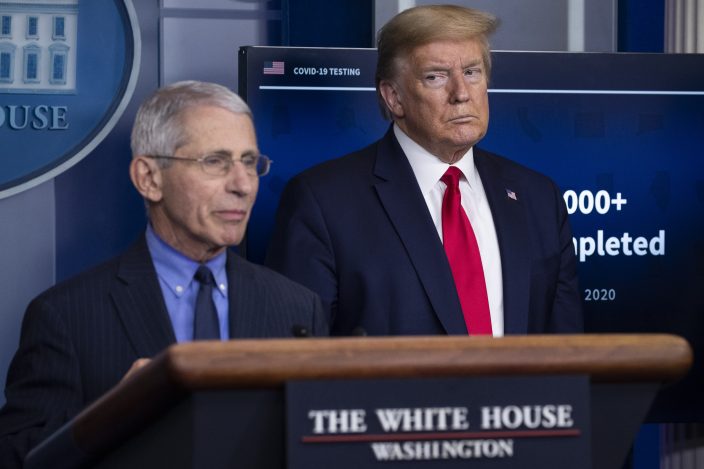 FILE - In this April 17, 2020, file photo Dr. Anthony Fauci, director of the National Institute of Allergy and Infectious Diseases, speaks about the coronavirus, as President Donald Trump listens, in the James Brady Press Briefing Room of the White House in Washington. (AP PhotoAlex Brandon, File)

“On public relations I give myself a D,” he told Fox this week. “On the job itself we take an A-plus.”

In late January, when the virus first emerged in Wuhan, China, the CDC launched its emergency operations center. What was needed, epidemiologists said, was an aggressive public education campaign and mobilization of contact tracing to identify and isolate the first cases before the disease spread out of control.

Instead, Trump publicly played down the virus in those crucial first weeks, even though he privately acknowledged the seriousness of the threat.

“I wanted to always play it down,” the president told journalist Bob Woodward in March. “I still like playing it down because I don’t want to create a panic.”

But the virus kept coursing through the country, and the world. And with a president bent on minimizing the dangers, the U.S. would become ever more polarized, with the simple acts of wearing masks and keeping a distance transformed into political wedge issues.

“You have to be calm,“ Trump said on March 6, during a visit to the Atlanta headquarters of the CDC. “It’ll go away.”

By mid-March, hospitals in New York and elsewhere were deluged with patients and storing bodies in refrigerated morgue trucks.

And that was just the beginning.

The death chart was the awakening. On March 31, the nation was still grappling to understand the scope of the pandemic. Schools were disrupted, people sheltered at home and professional sports were paused. But the ascending lines of mortality on the chart said things were going to get way worse.

Dr. Deborah Birx, the White House coronavirus response coordinator, and Dr. Anthony Fauci, director of the National Institute of Allergy and Infectious Diseases, stood next to the president to explain the numbers. The doctors said that models of the escalating pandemic showed that, unless the country adopted masks, practiced distancing and kept businesses closed there would be 100,000 to 240,000 deaths. They stressed that if the U.S. adopted strict measures, the deaths could remain under 100,000.

“We would hope that we could keep it under that,” Trump said then.

Still, instead of issuing a national mask mandate and other recommended measures, the Trump administration within weeks posted its “Opening Up America Again” plan.

The CDC began developing a thick document of guidelines to help local leaders make decisions about when reopening in their corner of the country was safe. But the White House thought the guidelines were too strict. They “ would never see the light of day, ” CDC scientists were told.

The Associated Press would eventually release the 63-page document, which offered science-based recommendations for workplaces, day care centers and restaurants.

Meanwhile, the president refused to wear a mask in public, planned political rallies where masks were not required, and downplayed the CDC’s data tracking the disease’s toll. And in May, communities reopened without the CDC’s up-to-date guidance.

The predictable happened: Cases surged as soon as communities reopened. And by the end of May all hope for keeping the death toll under 100,000 vanished.

The president’s argument was the toll from remaining closed would be too high — both economically and for people struggling with isolation at home and unable to send their children to school. Unspoken: the potential impact on his own reelection prospects.

Eager to find a quick fix that would justify a fast reopening timetable set by the White House, Trump himself championed the use of hydroxychloroquine, an anti-malarial drug, as a “game changer” to treat COVID-19. He persisted despite repeated warnings from the Food and Drug Administration and others that there was no proof that it was effective, and there was reason to believe it could be dangerous.

The administration also touted the use of convalescent plasma as a treatment, though Fauci and others thought the supporting data was weak.

Trump and his administration did not take scientific naysaying well.

Trump installed a lobbyist, Michael Caputo, to head communications for the U.S. Department of Health and Human Services, which oversees CDC and the FDA. Caputo had worked as a public relations consultant hired by the Russian energy giant Gazprom to improve President Vladimir Putin’s image in the U.S., and had no public health background.

Caputo hosted a video on Facebook in which he likened government scientists to a “resistance" against Trump, and emails surfaced in which he castigated CDC officials, challenging their scientific pronouncements and trying to muzzle staffers. He would take a leave in September after his actions were revealed.

But the CDC's science-based recommendations continued to be routed through the White House task force for vetting before release.

The administration’s meddling and public rebukes has driven CDC morale to an all-time low, according to agency officials who spoke on the condition of anonymity because they were afraid of losing their jobs. The constant battling against the administration’s political forces has made the difficult job of managing a pandemic even harder, and created a high rate of burnout.

Redfield has been criticized for not being a strong enough defender; those who long worked at the agency hope to see its leadership stand up for science in the face of politics.

“I’m sure this won’t be easy, but it’s essential to CDC’s reputation,” said Dr. Sonja Rasmussen, a 20-year CDC veteran who is now a medical professor at the University of Florida. “We need a strong and trusted CDC to get ourselves through this pandemic — as well as through the next public health emergency after this one.”

Even as Fauci was restricted in his interactions with the media — his candor did not wear well with the administration — Trump elevated a new public face for his pandemic response task force: Dr. Scott Atlas, a Stanford University neurologist with no background in infectious disease.

White House officials said Atlas’ role is to play devil’s advocate, and to question data brought by doctors and public health experts — with an eye toward Trump’s goal of a wider economic reopening in the weeks before the election, according to two White House officials who spoke on condition of anonymity to discuss internal operations.

In Atlas, Trump has a doctor who has downplayed the need for students to wear masks or social distance. Atlas has advocated for allowing the virus to run amok to create “herd immunity,” the idea that community-wide resistance can be built by infecting a large portion of the population. The World Health Organization has discredited the approach as dangerous.

As Fauci said in August, there is “a fundamental anti-science feeling” at a time when some people are pushing back at authority. “Science tends to fall into the category of authoritative. People don’t like that.”

Trump’s tweets and other pronouncements have served to rally that opposition, down to the local level.

At least 60 state or local health leaders in 27 states have resigned, retired or been fired since April, according to a review by the AP and Kaiser Health News. Those numbers have doubled since June, when the AP and KHN first started tracking the departures.

Many quit after experiencing political pressure from public officials, or even violent threats from people angry about mask mandates and closures.

In Ohio, Dr. Joan Duwve was nominated by the governor for the job of state health director on Sept. 10. But just hours later, she withdrew her name from consideration. She said in a statement to The State newspaper that she did so to protect her family, after she learned that armed protesters had gone to the home of the woman who would have been her predecessor, Dr. Amy Acton, before she eventually resigned in June.

The White House has realized there is a downside to publicly undermining science. Officials recognize voter mistrust in the administration’s pandemic response and concerns about political interference in speeding the vaccine production timetable is an emerging public health crisis of its own. They say they’re worried there will be unnecessary deaths and economic impact if Americans are afraid of getting vaccinated, according to two White House officials who spoke on condition of anonymity to describe the administration’s thinking.

The White House has ordered a campaign to bolster public confidence in the development process. It would include elevating the profiles of Trump targets like FDA Commissioner Dr. Stephen Hahn and the CDC’s Redfield.

One person is not on board — Trump. Less than seven weeks from Election Day, he appears driven to say and do what he sees as necessary to secure a second term, whether backed by science and evidence or not. So he embraces rallies that break all the rules proposed by his own scientists, and taunts Biden for following them.

And despite the grim death toll, the president continues to frame the past six months as a success.

“When the terrible plague arrived from China, we mobilized American industry like never before. We rapidly developed life-saving therapies, reducing the fatality rate," Trump told a raucous Ohio crowd at a rally Monday. “We’re going to deliver a vaccine before the end of the year. But it could be a lot sooner than that.”