Barack Obama spent hours reading legal briefs as he mulled candidates for the Supreme Court. Bill Clinton savored building a personal connection with Ruth Bader Ginsburg. And Ronald Reagan offered a personal touch in making his case for Anthony Kennedy after his first two picks for a vacancy went sideways.

President Donald Trump has a style all his own for selecting a nominee for the high court. He's flying by the seat of his pants with his frequent public deliberations on replacing Ginsburg, a process that’s moving at warp speed.

In recent history, the process of picking a nominee has been notable for hush-hush meetings with finalists, presidents looking to cement a personal connection with their pick, invasive vetting and carefully planned media relations blitzes to support the nominee. 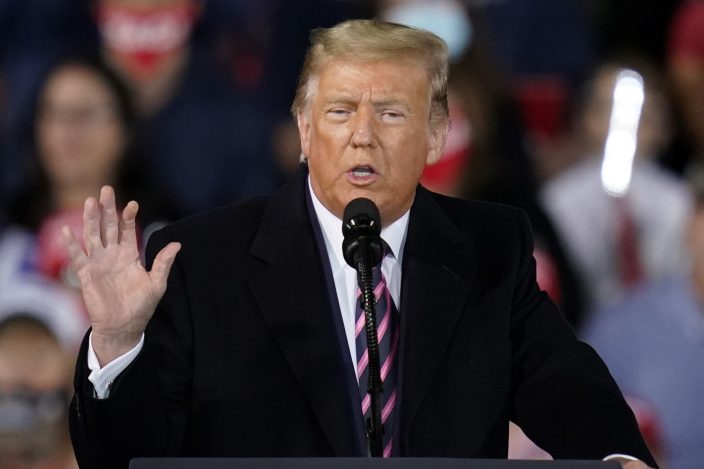 Trump is holding little back, readily airing his thinking on the state of the deliberations.

He's acknowledged the potential political benefits of those he might pick — his short list includes candidates from battleground states Florida and Michigan. The prospect of establishing a 6-3 conservative majority on the high court offers him a chance to energize supporters six weeks before Election Day.

Current and former advisers to Trump, who says he's considering five women, say the process for the president comes down to answering two general questions: Does the person have the judicial temperament to satisfy and spark his conservative base ahead of the Nov. 3 election and is she able to handle what is certain to be a bruising confirmation fight? 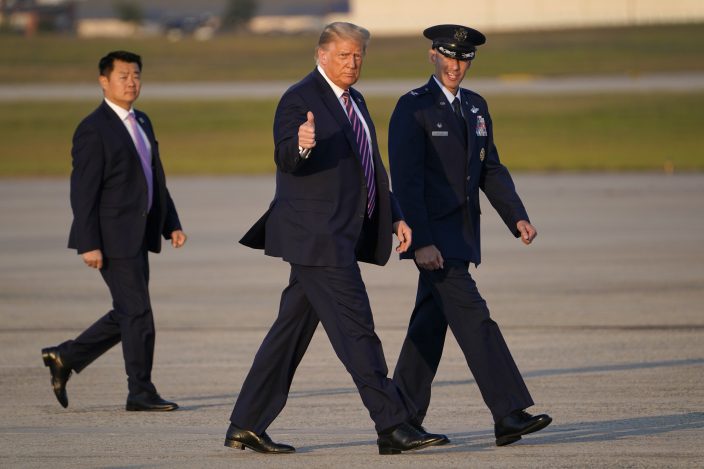 “When the president interviews these five, he’s asking, ‘Is this person sitting in front of me tough enough to take what’s coming?’” said Joe Grogan, the president’s former White House domestic policy director. "What lays ahead will be brutal.""

Trump, who has promised to announce his nomination Saturday, remains in close consultation with staff, but he’s not playing an aggressive hands-on role in vetting finalists or asking specific questions about their backgrounds or specific rulings, according to one person involved in the process who spoke on condition of anonymity to discuss internal deliberations.

The president’s primary role is centered on the final stage of the process — the interviews, where he explores their judicial philosophies, their courage and any potential weaknesses.

He did just that with finalists for his first two Supreme Court selections, holding private conversations that lasted 50 minutes to an hour. In those talks, Trump tested the candidates' reactions to other Supreme Court justices and specific criticism from others, among other topics, according to the individual involved in Trump's selection process.

With this vacancy, Trump has lightheartedly polled supporters at campaign rallies about whether he should select a man or woman, publicly shared that he’s gotten good feedback about one federal judge he’s giving consideration and marveled that another contender is only 38.

“I do think that this is yet another example where precedent and historical examples seem to offer less of a guide than they once did,” said Ted Frantz, a presidential historian at the University of Indianapolis. “This administration uses a different playbook when it comes to SCOTUS nominations,” using an acronym for the Supreme Court of the United States.

Trump's predecessors had varied — and mostly quiet — parts in their administration's vetting.

But Reagan, in a weekly radio address, vouched personally to the American people for fellow Californian Anthony Kennedy, his third pick for the court in 1987 after the Senate rejected Robert Bork and Reagan’s second choice, Douglas Ginsburg, withdrew from consideration after it became public he smoked marijuana several times as a college professor.

Clinton earlier this week recalled pouring over the backgrounds of 40 candidates, diving into legal brief, and getting first lady Hillary Clinton’s recommendation before tapping Ginsburg.

“We sneaked her in there on a Sunday night, and nobody knew it,” Clinton recalled of Ginsburg in an interview with CNN’s “State of the Union.” “And I had the conversation of a lifetime with her. And I knew, after we talked for 10 minutes, that I should appoint her.”

President George W. Bush’s White House conversations with candidates were “little more than chitchat,” the journalist Jeffrey Toobin wrote in his book “The Nine.” Bush, who wasn’t a lawyer himself, preferred to ask about candidates’ families and even their exercise routines, rather than discuss judicial philosophy or specific cases.

Bush wound up with two vacancies to fill in quick succession.

The first came when Justice Sandra Day O’Connor announced her retirement from the court in 2005. Soon after, Bush announced he would name John Roberts to fill her seat, but even before hearings got started, Chief Justice William Rehnquist died of cancer and Bush decided to nominate Roberts to be chief justice. And then he had to fill O’Connor’s seat with someone else.

He settled on someone he knew well: Harriet Miers, a Texan who worked for Bush when he was governor and then as White House counsel.

“I know her heart, I know her character,” Bush gushed at Oval Office ceremony to announce Miers' nomination.

That wasn’t enough. Miers, who had no judicial experience, ultimately withdrew her nomination under pressure from conservative groups and concerns from senators. Samuel Alito ultimately filled O’Connor’s seat.

Obama threw himself deep into the vetting process before announcing the nominations of Sonia Sotomayor, Elena Kagan and Merrick Garland.

Sotomayor and Kagan were confirmed during his first term. Garland, nominated in 2016, wasn't given a hearing as Senate Majority Leader Mitch McConnell argued that the vacancy created by the death of conservative Justice Antonin Scalia should be filled by the next president.

Obama, a former lecturer at the University of Chicago law school, insisted on reading the legal briefs of potential nominees, working his way through large binders of briefings and summaries and other writings.

He also quizzed his legal and political advisers on the pros and cons of each of his choices, according to two former senior White House advisers who spoke on condition of anonymity to discuss Obama's private deliberations.

Obama had plenty of allies in the legal world, but one former adviser said Obama was hesitant to consult outside the White House to prevent leaks about his thinking and to limit scrutiny of a potential pick before his public announcement.

Trump advisers on Tuesday pushed back against the notion that there is not enough time for Trump to properly vet and the Senate to confirm a nominee before Election Day.

All the candidates under serious consideration, with the exception of White House deputy counsel Kate Comerford Todd, have recently been through a Senate confirmation process for a federal judicial nomination and are familiar to lawmakers. At the top of Trump’s mind is picking someone who will be a “textualist and an originalist,” someone who looks at the Constitution and interprets it as it is written, said White House press secretary Kayleigh McEnany.

“There’s plenty of time to do this before Election Day,” said Marc Short, chief of staff to Vice President Mike Pence.