The unexpected commercial success of the “RBG” film in theaters two years ago had CNN looking for another contemporary leader whose life could be seen in historical terms.

“We knew there was something about the fact that people thought they knew RBG, but our film revealed there was a lot more to know,” said Amy Entelis, head of CNN Films. “We wanted to figure out if there was anyone else like that, and we landed on John Lewis.” 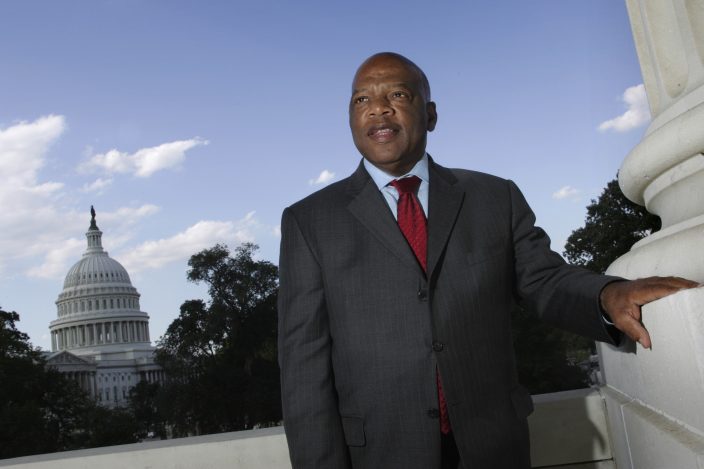 FILE - With the Capitol Dome in the background, U.S. Rep. John Lewis, D-Ga., is seen on Capitol Hill on Oct. 10, 2007, in Washington. The success of CNN's 'RBG' film two years ago, about the late Supreme Court Justice Ruth Bader Ginsburg, led the network on a search for a similar contemporary figure whose life could be examined in historical terms. CNN's Amy Entelis says that led them to Lewis, who died of cancer in July. The film "John Lewis: Good Trouble" will debut on CNN on Sunday night. (AP PhotoLawrence Jackson, File)

The film, which had a limited release this summer and was part of the Tribeca Film Festival, premieres on television Sunday at 9 p.m. Eastern on CNN.

As Erika Alexander, a producer of “John Lewis: Good Trouble,” put it, he was “more than just someone who crossed a bridge and got hit in the head.”

The footage that made Lewis a part of history, from the 1965 march in Alabama, is of course a big part of the film. Knocked to the ground and beaten with a nightstick by a police officer for crossing the Edmund Pettus Bridge in Selma as part of a civil rights march, Lewis thought he was going to die that day.

Invited into the movement after writing a letter to the Rev. Martin Luther King Jr. who dubbed him the “boy from Troy” (Alabama), Lewis participated in Freedom Rides. He was leader of the Student Nonviolent Coordinating Committee and spoke from the stage during the historic March on Washington, after elders edited the young firebrand's speech to tone it down.

That was all before a 33-year career in Congress that ended with his death in July at age 80.

“John Lewis was really a singular figure in politics,” said Dawn Porter, the film's director. “He was a person who was able to live his values. There was no doubt where he stood on issues. But where possible, he crossed the aisle” to reach common ground.

Lewis said he was arrested some 45 times, all for getting into what he called “good trouble,” raising a ruckus for a righteous cause.

Yet he appeared never to be overcome by cynicism.

“He had a mystique,” said Alexander, an actor and activist who campaigned with Lewis for Hillary Clinton four years ago. “But when it came down to it, he was a very sweet man.”

Alexander was working on her own documentary about Lewis before Entelis encouraged her to join forces with Porter, the type of Hollywood arrangement that often doesn't work but did in this case.

Their film has some memorable touches. Lewis told the story about how he practiced preaching in front of his family's chickens while growing up so often that cameras caught some congressional staff members silently mouthing the words as he spoke.

A staff member answered, “tedious,” when asked what it was like to walk through an airport with Lewis, who was frequently stopped by admirers. Another congressman, the late Elijah Cummings, said that “I've had a lot of pictures taken where people think that I'm John Lewis.”

Lewis treasured a program from the inaugural of Barack Obama, who signed it and wrote that his election as the first Black president “was because of you, John.” Four years later when Obama was re-elected, he said “it's still because of you.”

With the film's general admiring tone, it was a jolt to hear one example of Lewis playing hardball in a questionable way. He beat his good friend Julian Bond in a 1986 primary for Congress after publicly challenging him to take a drug test.

Porter finished the film late last fall, just before learning that Lewis had been diagnosed with pancreatic cancer.

She decided not to update her work with the news, in part because she didn't want to disrupt a powerful closing scene. Porter, a California resident, flew to Washington in February to screen the film for her subject, calling it her "best Valentine's Day ever.”

CNN also had to consider whether Lewis' illness would change its public release plans for the film. Ultimately, it didn't.

“As tragic as that was, we felt relieved that we had captured what we had set out to do,” Entelis said. “It was a matter of figuring out what to do that was appropriate and tasteful.”

While “John Lewis: Good Trouble” didn't have nearly the exposure in theaters as “RBG” — the coronavirus pandemic guaranteed that — Entelis believes the time is right for people to see it on television. It offers a deeper dive into Lewis' life for people who became intrigued about his story around the time he died.

“There can't be a film that we can show at this particular moment in time that would be more relevant to what people are talking about in the world,” she said. “We think our audience will be very hungry for this film.”

The Tennessee Titans got a needed ...