President Donald Trump marveled at a rally this week about how important Supreme Court nominations are to voters.

But Senate Republicans are with the voters on that. Despite Democratic cries of hypocrisy, they're hoping the battle over replacing Ruth Bader Ginsburg will help them keep their Senate majority as well as Trump's job in the White House.

Beyond the Nov. 3 elections, some feel the generational goal of a solidly conservative court is worth the potential blowback. 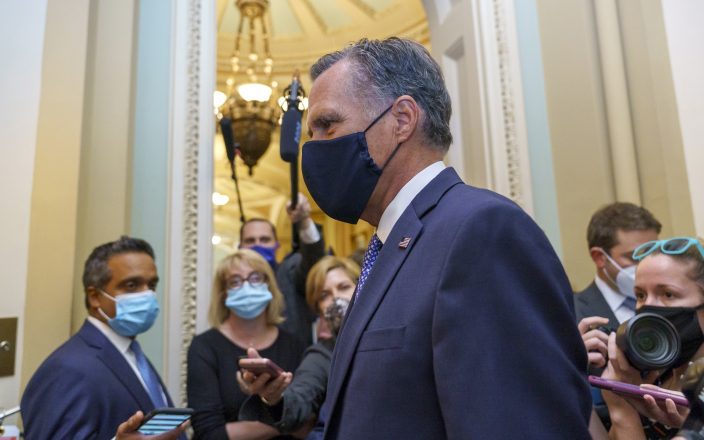 Sen. Mitt Romney, R-Utah, leaves the Senate Chamber following a vote, at the Capitol in Washington, Monday, Sept. 21, 2020. Romney is one of four Republicans who could oppose a vote on a replacement for the late Justice Ruth Bader Ginsburg prior to Election Day. (AP PhotoJ. Scott Applewhite)

“Most of us came to the Senate, ran for the Senate, in a lot of ways for big moments like this — for an opportunity to fill seats on the Supreme Court,” said Sen. John Thune, R-S.D., the GOP whip who is not up for reelection this year.

And whatever their personal views of Trump and his presidency, Republicans also see a political payoff in sticking with him and plunging ahead to confirm his pick to fill the court vacancy. before the Nov. 3 election.

By Wednesday, as mourners gathered to view Ginsburg's casket on the court's iconic steps, objections from Democrats that the presidential winner should name the nominee had slipped by GOP senators. They were preparing for confirmation hearings as soon as Oct. 12, with a possible full Senate vote Oct. 29. Trump is to announce his choice Saturday. 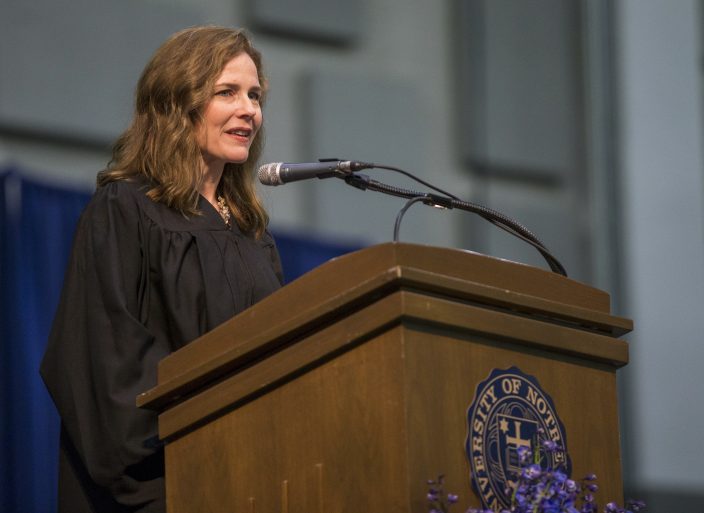 FILE - In this May 19, 2018, file photo, Amy Coney Barrett, United States Court of Appeals for the Seventh Circuit judge, speaks during the University of Notre Dame's Law School commencement ceremony at the university, in South Bend, Ind. Barrett, a front-runner to fill the Supreme Court seat vacated by the death of Justice Ruth Bader Ginsburg, has established herself as a reliable conservative on hot-button legal issues from abortion to gun control. (Robert FranklinSouth Bend Tribune via AP, File)

Democrats, led by presidential nominee Joe Biden, complain about Republicans rushing through a pick so close to the election after Majority Leader Mitch McConnell led the GOP in refusing to vote on a nominee of President Barack Obama in February 2016, long before that year’s election. No Supreme Court nominee in U.S. history has been confirmed by the Senate so close an election.

But Republicans are eagerly running into the election year fight, sensing a reward greater than the risk.

A third Trump justice is certain to tip the court rightward, likely to revisit landmark decisions on abortion, health care, gun rights and other issues. A liberal icon, Ginsburg would be replaced by a justice more in line with Trump's earlier nominees, Neil Gorsuch and Brett Kavanaugh. Even without fresh polling this week, almost all Republicans backed McConnell's push for a quick vote.

Trump is confident of Senate support for his choice. The top contender is Amy Coney Barrett, a judge of the 7th U.S. Circuit Court of Appeals in the Midwest, though the president may also meet Friday with Judge Barbara Lagao in battleground Florida.

As early presidential voting is underway in several states, only two Republican senators, Lisa Murkowski of Alaska and Susan Collins of Maine have objected to the speedy timetable

There's little the Democrats can do to block it. The Senate is controlled by Republicans, 53-47, with a simple majority needed for confirmation. Under Senate rules, Vice President Mike Pence can break a tie.

Biden won't say whom he might pick, denying Trump and Republicans an opportunity to shift attention. "We should go to the American people, make the case why this is a gigantic mistake and abuse of power,” Biden said of the GOP effort before heading to a campaign event in North Carolina.

At a rally late Tuesday in Pittsburgh, Trump told supporters how surprised he was in 2016 over voter reaction to the Supreme Court. That February, just before a crucial presidential primary debate in South Carolina, the sudden death of conservative Justice Antonin Scalia sent shockwaves through Washington.

Republicans remember the moment well: Trump on the debate stage started naming possible replacements. It was a jaw-dropping instant for advocates who have been working to restructure the courts since the Reagan era. And all the more stunning from Trump, a newcomer to politics who had supported abortion access just years earlier but was now naming conservative judicial champions.

"I was like, wow, I didn’t see that coming,” said Severino.

Now as Republicans strain to hold their slim majority in the Senate, they believe the court battle in the countdown weeks to the 2020 election will similarly bring wayward Trump voters back into the fold — or at least they'll go down in defeat having secured the long-sought goal.

One by one, GOP senators facing tough reelections — Martha McSally in Arizona, Thom Tillis in North Carolina, Steve Daines in Montana and Joni Ernst in Iowa — all threw their support behind voting on Trump's choice. Sen. Lindsey Graham, the chairman of the Judiciary Committee who faces his own tough race in South Carolina, estimated it will help him in win.

Even in Colorado, where the politics are more uncertain, Sen. Cory Gardner joined the push for a new justice — better to be seen as part of the movement, despite the political risks. Only the most independent senators — Murkowski and Collins, who faces her own reelection in Maine — declined.

But Democrats are also fired-up against what they see as Trump “stealing” another court seat, as Democratic leader Chuck Schumer puts it.

Several Democratic senators spoke well into the night from the chamber floor against voting now.

It is one of the quickest confirmation efforts in recent times as the nation is marking the grave milestone of 200,000 deaths from the coronavirus pandemic.

Ginsburg, 87, died Friday of metastatic pancreatic cancer. Her casket will remain on view through Thursday at the court. She will lie in state at the U.S. Capitol this week, the first woman accorded that honor.