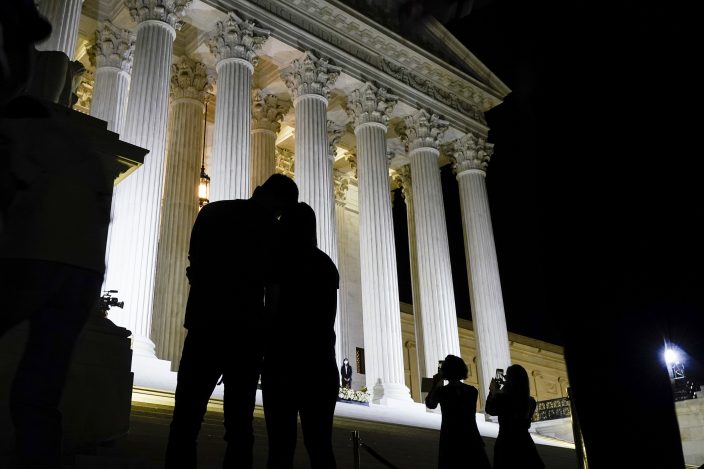 People pay respects as Justice Ruth Bader Ginsburg lies in repose under the Portico at the top of the front steps of the U.S. Supreme Court building on Wednesday, Sept. 23, 2020, in Washington. Ginsburg, 87, died of cancer on Sept. 18. (AP PhotoAlex Brandon)

FRUITS OF LABOR — An Associated Press investigation into the invisible workforce of millions of laborers toiling in the palm oil industry in Malaysia and Indonesia found many of them suffering from various forms of exploitation — the most serious including child labor, outright slavery and allegations of rape. The workers from some of the poorest corners of Asia tend the heavy reddish-orange palm oil fruit that makes its way into the supply chains of many iconic food and cosmetics companies like Unilever, L’Oreal, Nestle and Procter & Gamble. Together, the two countries produce about 85 percent of the world’s estimated $65 billion palm oil supply. By Margie Mason and Robin McDowell. SENT: 5,330 words, photos, videos, graphic. An abridged version of 1,220 words is also available. 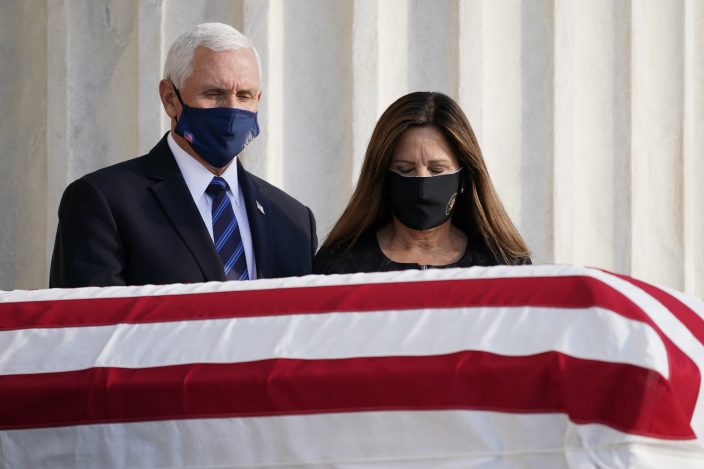 Vice President Mike Pence and second lady Karen Pence pay respects as Justice Ruth Bader Ginsburg lies in repose under the Portico at the top of the front steps of the U.S. Supreme Court building on Wednesday, Sept. 23, 2020, in Washington. Ginsburg, 87, died of cancer on Sept. 18. (AP PhotoAlex Brandon, Pool)

RACIAL-INJUSTICE-BREONNA-TAYLOR — Anger, frustration and sadness over the decision not to charge Kentucky police officers for Breonna Taylor’s death poured into America’s streets as protesters lashed out at a criminal justice system they say is stacked against Black people. Violence seized the demonstrations in her hometown of Louisville as gunfire rang out and wounded two police officers. By Dylan Lovan, Piper Hudspeth Blackburn and John Minchillo. SENT: 1,050 words, photos. With BREONNA TAYLOR-ATTORNEY GENERAL — Black attorney general chokes up during Taylor announcement; RACIAL-INJUSTICE-BREONNA-TAYLOR-THE-LATEST.

For complete coverage of the Breonna Taylor protests in AP Newsroom.

ELECTION 2020-TRUMP-BALLOTS — President Donald Trump again declines to commit to a peaceful transfer of power if he loses the Nov. 3 presidential election, telling reporters, “We’re going to have to see what happens.” By Aamer Madhani and Kevin Freking. SENT: 580 words, photos, video.

ELECTION 2020-BIDEN-PROGRESSIVES — Some leading activists on the left are pressing Joe Biden to endorse expanding the number of Supreme Court justices should he win the White House and Democrats take control of the Senate. But Biden hasn’t embraced those calls, worried they may intensify the nation’s partisan split. By Will Weissert and Cheyanne Mumphrey. SENT: 880 words, photos.

UN GENERAL ASSEMBLY-VACCINE PLEAS — Many world leaders at this week’s virtual U.N. summit hope a vaccine will be made available and affordable to all countries, rich and poor. But with the U.S., China and Russia opting out of a collaborative effort to develop and distribute a vaccine, and some rich nations striking deals with pharmaceutical companies to secure millions of potential doses, the U.N. pleas are plentiful but likely in vain. By Cara Anna. SENT: 910 words, photos.

EGYPT-GANG RAPE — An announcement last month that Egypt’s top prosecutor would investigate an alleged 2014 gang rape of a 17-year-old girl at a luxury Cairo hotel marked a rare moment of triumph for human rights activists. Those hopes were quickly dispelled after authorities detained possible witnesses and some of their acquaintances, who could face separate charges under the country’s vague morality laws. By Samy Magdy. SENT: 1,110 words, photo.

WESTERN-WILDFIRES-WINE-CRISIS — Smoke from the West Coast wildfires has tainted grapes in some of the nation’s most celebrated wine regions with an ashy flavor that could spell disaster for the 2020 vintage. Wineries in California, Oregon and Washington have survived severe wildfires before, but the smoke from this year’s blazes has been especially bad — thick enough to obscure vineyards drooping with clusters of grapes almost ready for harvest. By Andrew Selsky. SENT: 900 words, photos.

VIRUS-OUTBREAK-ASIA — Foreigners holding certain types of visas and residence permits will be permitted to return to China starting next week as the threat of coronavirus continues to recede. SENT: 520 words, photos. With VIRUS OUTBREAK-THE LATEST.

VIRUS OUTBREAK-VIRAL QUESTIONS-FLU — The flu and COVID-19 have such similar symptoms, you may need to get tested to know which type of virus is making you miserable. SENT: 450 words, graphic.

ELECTION 2020-POMPEO — Secretary of State Mike Pompeo is ignoring criticism and forging ahead with events that have overtly political overtones ahead of the presidential election. By Diplomatic Writer Matthew Lee. SENT: 810 words, photos.

FEDERAL EXECUTIONS — The lawyer for the first Black inmate scheduled to die this year as part of the Trump administration’s resumption of federal executions says race played a central role in landing her client on death row for slaying a young white Iowa couple and burning them in the trunk of their car. By Legal Affairs Writer Michael Tarm. SENT: 1,100 words, photos.

KOREAS-MISSING-OFFICIAL — South Korea says North Korean troops fatally shot a South Korean government official who may have attempted to defect and set his body on fire, after they found him on a floating object in waters near the rivals’ disputed sea boundary. SENT: 800 words, photo.

LIBYA-MIGRANTS — Amnesty International says that thousands of Europe-bound migrants who were intercepted and returned to Libyan shores this year were forcefully disappeared after being taken out of unofficial detention centers run by militias allied with the U.N.-supported government in the capital, Tripoli. SENT: 460 words, photo.

AUSTRALIA-STRANDED WHALES — Authorities revised up the number of pilot whales rescued from Australia’s worst mass stranding from 50 to 70, as the focus shifted to removing 380 carcasses from Tasmania state shallows. SENT: 300 words, photos.

CHINA-AUTO-SHOW — Auto executives have flown in early to wait out a coronavirus quarantine ahead of the Beijing auto show, the year’s biggest sales event for a global industry that is struggling with tumbling sales and layoffs. By Business Writer Joe McDonald. SENT: 880 words, photos.

FINANCIAL MARKETS — Asian shares were mostly lower as caution set in after a retreat on Wall Street driven by a decline in technology shares. By Business Writer By Yuri Kageyama. SENT: 550 words, photos.