The return of fans to the German soccer league last week came with a catch. If there are too many infections in the host city, a circuit-breaker rule kicks in and fans are banned again. That's causing chaos for clubs.

Schalke fans face uncertainty over whether they can attend the first home game of the season Saturday against Werder Bremen. The club could otherwise have allowed in as many as 12,000 supporters, but the infection rate remains above the circuit-breaker level despite a slight drop Thursday. 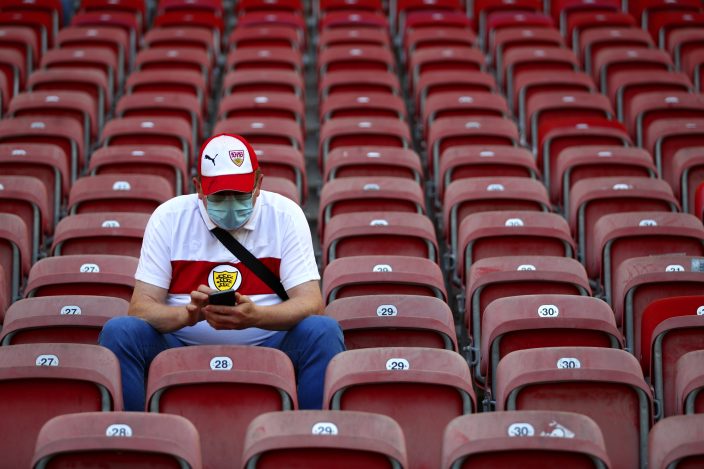 A Stuttgart fan waits for the start of the German Bundesliga soccer match between VfB Stuttgart and SC Freiburg, Germany, Saturday, Sept. 19, 2020. 8500 spectators are allowed to watch the game in the stadium. (AP PhotoMatthias Schrader)

Last week, high infection rates stopped Bayern Munich from hosting fans against Schalke in the season opener after the mayor said it would send the wrong message.

Less than 24 hours before Cologne was due to host Hoffenheim in front of fans, the circuit breaker kicked in there too. An hour's travel away, Borussia Dortmund hosted 9,300 fans for its 3-0 win over Borussia Mönchengladbach.

The magic number is 35 new cases per 100,000 inhabitants over a seven-day period. Any higher, and games should be held without fans. Schalke's home city of Gelsenkirchen was at 39.1 on Wednesday and 37.6 on Thursday according to the Robert Koch Institute, Germany’s national disease control center.

The circuit breaker rule was a compromise added during tense talks between state politicians last week, just before the league season began. Otherwise, supporters are allowed to attend up to 20% of the stadium capacity, though some local officials have set their own, lower limits.

Besides Schalke, all other Bundesliga games this weekend are due to have at least some home fans. That includes Arminia Bielefeld's first home game in the top division since 2009 against Cologne and Borussia Dortmund's visit to Augsburg, both Saturday, and Hoffenheim hosting Bayern on Sunday.

The uncertainty over fans is another factor putting pressure on Schalke in a calamitous 2020 for the club. A Champions League last-16 club as recently as March 2019, Schalke has not won a league game since January and was hammered 8-0 by Bayern last week. It's only scored nine Bundesliga goals all year.

Pressure is building on Schalke coach David Wagner, who is on the third-longest winless run (17) of any Bundesliga coach, according to league statistics. Jochen Schneider, the club's sporting director, said he expects more from the coaching staff ahead of the Bremen match.

“I expect a clear increase in performance and for that to be reflected in the result,” Schneider said Saturday.

Schalke has more to lose than most if fans can't come back. The coronavirus wiped out game-day revenue and helped expose the club's fragile financial situation, provoking warnings that Schalke could face insolvency if it didn't act. Schalke has slashed spending this season and sold U.S. midfielder Weston McKennie to Juventus.

That followed years of the club spending beyond its means in a bet that it could qualify regularly for the Champions League and the resulting TV revenue, something Schalke has only managed once since 2015. The cuts are likely to mean Schalke is no longer capable of fighting for any European qualification, club management has admitted.

Saturday's game against Bremen is a meeting of two former title challengers, now both in crisis mode. Bremen only avoided relegation last season with a playoff win over second-tier Heidenheim and lost its 2020-21 opener 4-1 to Hertha Berlin.