The European Union’s top migration officials struggled Thursday to sell their new plan to overhaul the bloc’s failed asylum system amid concern they have sold out to anti-migrant governments.

Critics say the proposal focuses on rapidly deporting people who don’t qualify as refugees and persuading African countries to stop them from coming.

The program, dubbed the “New Pact on Migration and Asylum,” is aimed at ending years of chaos at Europe’s borders and a political crisis that has seen some EU countries turn their backs on Greece, Italy, Malta and Spain, where most people seeking better lives enter. 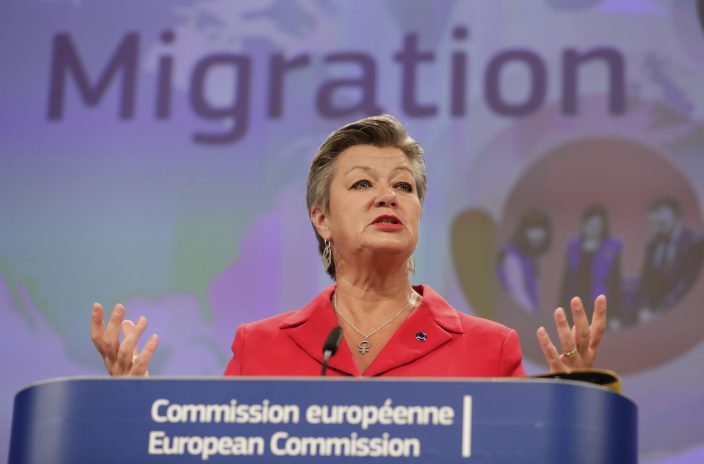 European Commissioner for Home Affairs Ylva Johansson, speaks during a media conference on the New Pact for Migration and Asylum at EU headquarters in Brussels, Wednesday, Sept. 23, 2020. (Stephanie Lecocq, Pool via AP)

It has already received a cautious welcome from Austria, the Czech Republic and Hungary, whose anti-migrant governments, along with those of Poland and Slovakia, refuse to bow to pressure to take in refugees and ease the load on their Mediterranean coastal partners.

The leaders of the Czech Republic, Hungary and Poland affirmed their hardline stance at EU headquarters on Thursday.

Germany, France, Greece and Italy also see the pact as a good basis to negotiate on. 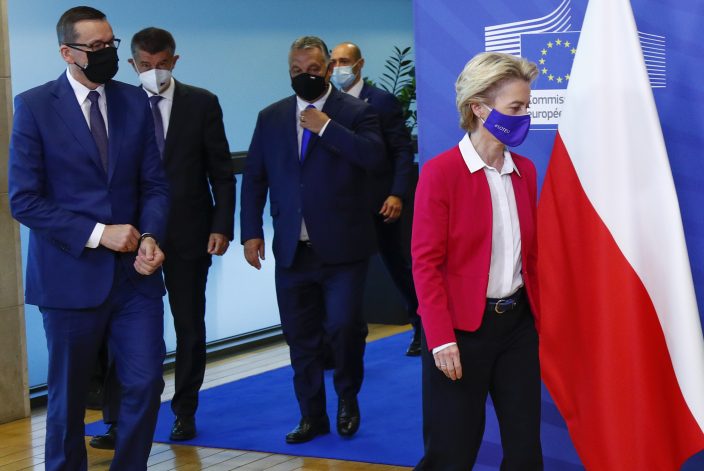 The measures, which must be endorsed by all 27 EU countries and the European Parliament, will prove a hard sell, particularly as the top migration officials want to see it approved by the end of the year.

“We have a system that makes sense. I am not asking you to like it. I am asking you to understand it,” European Commission Vice President Margaritis Schinas said as he was grilled by EU lawmakers.

Under the proposals, migrants arriving at Europe’s outside borders without permission would be screened within five days. They would then enter an asylum procedure or be deported, both within 12 weeks.

Migrants could be held in detention throughout, and these people would enter a legal limbo on arrival because they wouldn't be deemed to have entered EU territory.

EU member countries would then face two choices: take in some of the refugees or provide other material and logistical support; or for those not willing, take charge of deporting people whose applications are refused. Mandatory refugee quotas have been abandoned.

Countries that accept to host refugees would receive 10,000 euros ($11,650) per person in assistance from the EU’s coffers. Those dubbed the “bouncers of Europe” by one migration expert would have eight months to deport people not allowed in or be forced to accept them.

“The refuseniks have won. Blocking has been rewarded,” Dutch liberal lawmaker Sophie in ’t Veld said. She complained that EU member countries had “effectively allowed anti-migration forces to write our migration policies.”

She said that parts of the plan “cross the pain thresholds of many of us,” but that the only other choice is an ugly status quo where people languish at sea in dangerous boats or in squalid camps in the Greek islands.

“There is no better alternative on the table," she added.

Migrant arrivals have dropped significantly since 2015 when well over 1 million people entered Europe, most of them Syrians fleeing conflict, and the decrease in numbers is largely because of a deal the EU struck with Turkey, paying billions of euros to persuade Ankara to stop people leaving.

The new EU plan aims to build on aspects of that deal, establishing “partnerships” with the countries of northern Africa, where most people transit or leave in search of sanctuary or better lives in Europe.

“We need to move towards a comprehensive set of agreements and commitments with these countries that would be good for their people but good also for their ability to manage their borders and their migration systems,” Schinas said.

He said “tailor made” agreements would be sought with them, aimed at fighting smuggling, beefing up their border management capabilities, building reception centers and improving the way that people are “returned” from Europe.

EU officials reject claims that they might pressure these countries, but the commission will draw up a report on how cooperative they are in accepting their nationals back. If they’re not, they could be removed from Europe’s visa-free list.

The reaction among aid groups has been mixed. Some welcome the new attempt to end the disagreements that have endangered people's lives for years, while others fear that it is simply focused on preventing people from trying to get to Europe.

“It’s good that the European Commission is trying to bring EU countries together to achieve meaningful change. However, in its attempt to reach consensus, the commission has bowed to pressure from EU governments whose only objective is to decrease the number of people granted protection in Europe,” said Marissa Ryan, head of Oxfam’s EU office.