All the paintings, sculptures and other works that grace museums and galleries around the world are the visible tip of a huge art iceberg. Most of the institutions only have space to exhibit a fraction of their collections, meaning the majority of the art is locked away out of the public eye.

It is building a gleaming, mirror-coated new depot — a work of art in itself — that will be open to the public next year once the collection of 151,000 artworks is transferred. 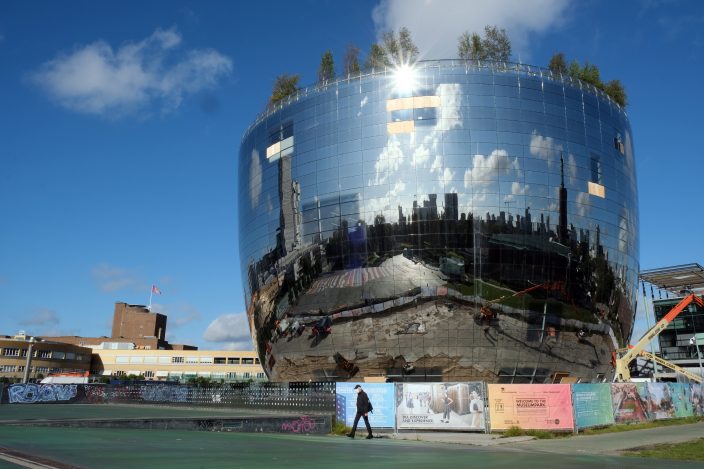 A person walks past the new Depot Boijmans Van Beuningen in Rotterdam, Netherlands, Thursday Sept. 24, 2020. The Museum Boijmans Van Beuningen in Rotterdam has a shimmering new depot that is designed to open up the institution's engine room to the public. The mirrored building will give visitors access to the vast majority of the museum's collection of 151,000 art works that currently are stored out of the public eye. (AP PhotoMike Corder)

“You mount about 6% of the collection — it could be 10 — but then you have 90% in storage. What is the public responsibility to not show 90%?” the museum’s director, Sjarel Ex, told The Associated Press on Thursday as he showed media around the new depot before allowing members of the public to take a look around in coming days.

“We know that this collection is cherished and that it’s important and that depots are very worthwhile, obviously," Ex said. “But when you cannot look at it, you always have the kind of risk that it’s out of sight, out of mind.”

There was another imperative driving the project -- the old storage in the basement of the museum had become prone to flooding, putting priceless works of art at risk of water damage.

The striking new depot in the heart of Rotterdam’s Museum Park is covered in 1,664 mirrored panels that reflect the park and the skyline of Rotterdam, a city known as Manhattan on the Maas — a name derived from the river that bisects the port city and its many high-rise buildings.

Many of the glass panels were adopted by local people and organizations at 1,000 euros ($1,165) a piece in a show of support for the new building and to help foot the bill of more than 90 million euros ($105 million).

The 39.5-meter (130-foot) tall building has a rooftop forest of 75 birch trees that were grown at ground level so that their roots intertwined to make them stronger. Inside there are five different climate zones designed to protect the priceless collection of art that ranges from fragile glass to Old Master paintings and prints and modern art installations.

Elevators glide up and down at either end of the a central atrium, and stairways zigzag between the different floors.

Architect Winy Maas, who already won plaudits in Rotterdam for his spectacular arch-shaped Market Hall, said that the museum didn't want a Fort Knox-style storage space on the edge of town.

Instead, the new depot is in the middle of a park surrounded by other museums in the center of the city.

Maas decided to make the building round — he didn’t want corners — with a base that is smaller than the roof, to reduce its footprint.

He wanted the rooftop forest to compensate for the space the building takes up in the park. He covered the concrete shell in mirrors to help it blend in with and reflect its surrounds, but also to put people, he says, “in a reflective mode.”

The depot, effectively the museum's engine room, is far more spartan than the main museum, next door, which is currently closed for a major restoration.

The depot will be a working environment, where packers prepare art for shipment and conservators work on paintings. All, now, in the public eye. It also will have space for members of the public who want to store their art.

The open nature of the depot could be a security worry, but Ex says the art is safe.

“You can see you have cameras. You have very strong glass doors. You have hidden secrets. And we feel comfortable,” he said when asked about security.

Visitors will have different options — they can go direct to the roof garden, buy a ticket to look around on their own or book a guided tour that gives them closer access to the people working in the depot and the artworks.

Empty racks already stand in some of the spaces waiting for the art to be moved in.

The level of access and bare-bones interiors create a clear difference with the museum, Maas said.

“Here you have to be inspired by yourself somehow or by the surprises that are there. The non-choreography, the opening the door act. That sliding the storage element to find out that Monet is hanging next to a gorgeous amateur piece. I think the kind of combinations that you never could have designed is what this is about a little bit.”

Duterte says he can be held responsible for drug killin ...

The Philippine president has said ...

If the Dallas Cowboys are going to ...