The Indianapolis Colts used the offseason to beef up their defense.

After two games, a franchise known for winning shootouts suddenly has the league's top-ranked defense. Hey, it's a promising start. 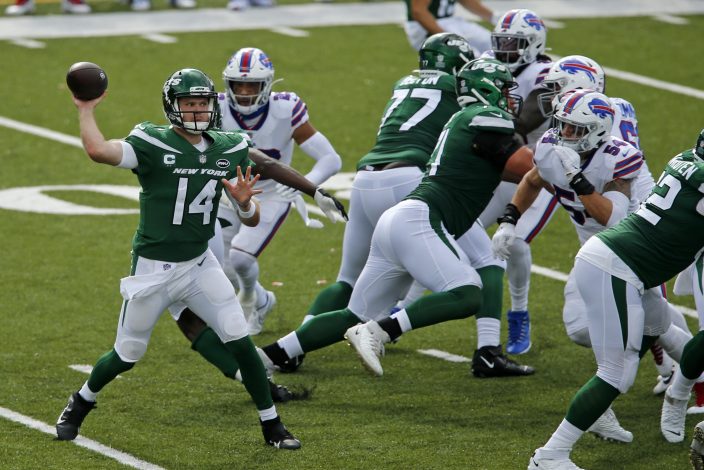 “Nobody cares if you’re the top defense Week 1, Week 2, Week 3. Nobody gives a care," Pro Bowl linebacker Darius Leonard said. “But when you get to Week 15, Week 16, that’s when everybody’s talking about who has the No. 1 defense. So we've got to go out and maintain that (ranking)."

Coming off a game in which the Colts picked off three passes, recorded three sacks and held Minnesota to 175 total yards, the fewest in six years, they will try to build momentum against the New York Jets (0-2) with up to 7,500 fans in attendance. 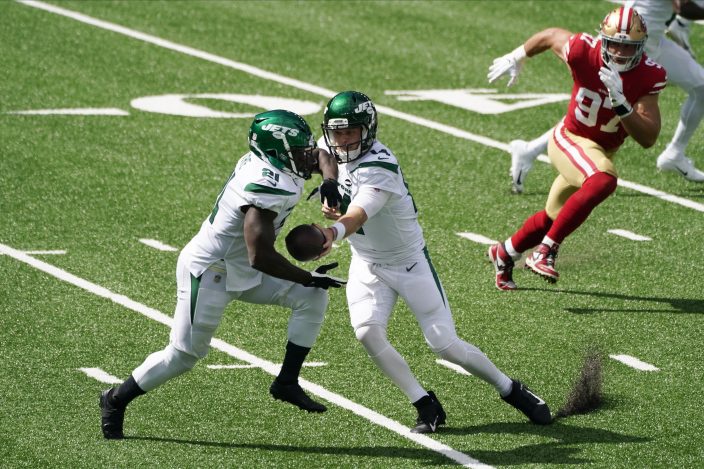 What's gone wrong for the Jets?

They have the fewest yards per game (265.5) in the league, their only first-half points have come on two field goals and they're 27th in third-down conversions (36%).

And this week, they could be without receivers Breshad Perriman (ankle) and Jamison Crowder (hamstring), too. 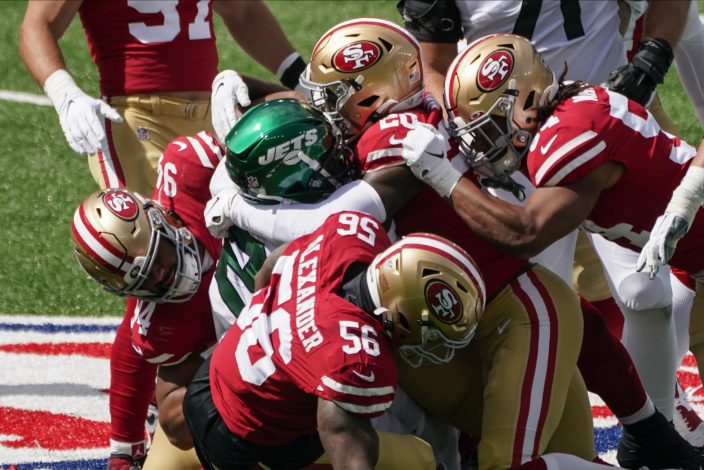 New York Jets running back Frank Gore is tackled during the first half of an NFL football game against the San Francisco 49ers, Sunday, Sept. 20, 2020, in East Rutherford, N.J. (AP PhotoCorey Sipkin)

But they're not giving in.

“We have to stay together," said Frank Gore, who spent three seasons in Indy and is the No. 3 rusher in NFL history. “When we get opportunities to make a play, we need to make a play. I feel like I could have played better and done things to help this team early on. Everybody has to look at each other and know that. Each man has to do better for this team.”

Meanwhile, they're facing a foe that prefers to grind it out and play keep away on offense, and allowing its defense to do what it does best. 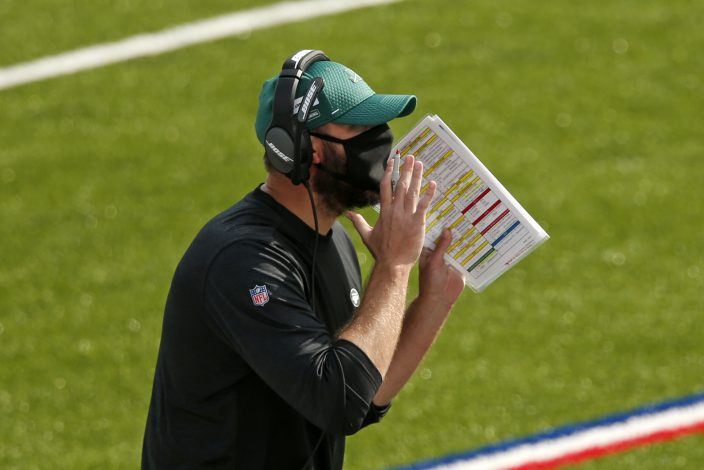 “That's the No. 1 goal each week, to stop the run and make the quarterback beat us with his arm," Leonard said. “And let our defense be great.”

Gore isn't the only Jets player returning to Indy this weekend. 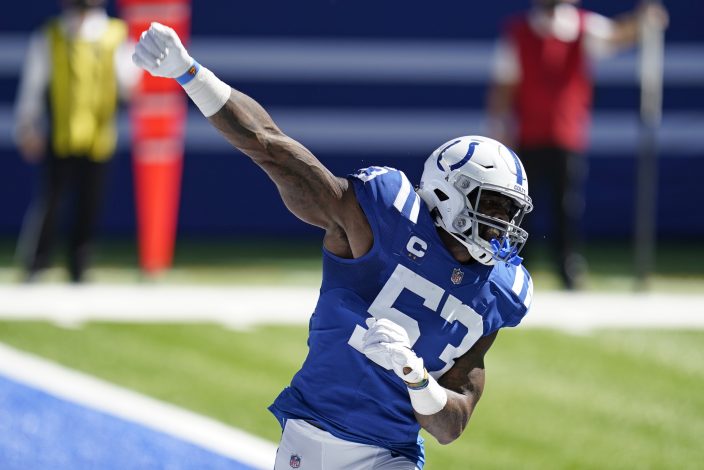 He's one of eight players on the active roster who suited up for the Colts. The others are offensive lineman Josh Andrews, defensive end Henry Anderson, linebacker Tarell Basham, safety Matthias Farley and cornerbacks Quincy Wilson, Nate Hairston and Pierre Desir. 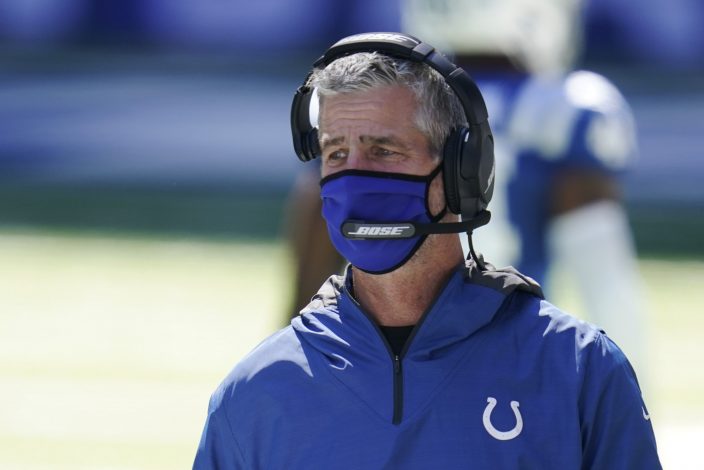 Just don't expect to hear much about grudges.

“For me, it’s about going and trying to get on track,” Desir said. “I want to do everything I can to help the team. We’re working every day and as a defense, fixing the things that need to be fixed."

The pre-draft deal between Indianapolis and the Jets in 2018 had a major impact on both teams.

By sliding back three spots and acquiring two extra second-round picks from the Jets in 2018 and another in 2019, general manager Chris Ballard found some key cogs.

Indy used the Jets' picks on two-time All-Pro guard Quenton Nelson and right tackle Braden Smith in 2018, then selected starting cornerback Rock Ya-Sin in 2019. They dealt the Jets' other second-rounder in 2018 to Philadelphia, swapping spots while acquiring an extra fifth-rounder. Ballard used those picks on defensive end Kemoko Turay and running back Jordan Wilkins.

Jets coach Adam Gase is already facing outside criticism for the team’s lackluster game-day performances and now some defensive players are concerned about practices, too.

After last week's loss, safety Bradley McDougald said players — particularly the defense — need to show more intensity in practice, an assertion supported by linebacker Avery Williamson. McDougald reiterated his point this week, but clarified that he wasn’t criticizing the coaches. Instead, he wants teammates to improve their focus.

“I think if we go down the line and ask that question to anybody on this team, I think everybody would agree,” McDougald said. “We’ve had slow practices, we’ve had down practices, and that is players moving slow, or players not making the plays that we’re expected to be able to make.”

Colts quarterback Philip Rivers could celebrate a handful of major milestones this weekend.

The eight-time Pro Bowler needs five completions to pass Hall of Famer Dan Marino (4,967) for No. 5 on the NFL's career list, one touchdown pass and 152 yards passing to become the sixth player in league history with 400 TDs and 60,000 yards. He also needs one more win to break a tie with Hall of Famer Fran Tarkenton (124) for No. 8 all-time.

England’s soccer leadership has a ...