State election regulators on Thursday also said initial vote tallies could extend beyond Election Day if voters wait until late in the cycle to mail or hand deliver ballots.

Fewer than 8,000 absentee ballots were cast statewide in the 2016 presidential election.

Mourners gather for the funeral of a man who died of causes believed unrelated to COVID-19 into a grave in a section of the Valle de Chalco Municipal Cemetery which opened early in the coronavirus pandemic to accommodate the surge in deaths, in Valle de Chalco on the outskirts of Mexico City, Thursday, Sept. 24, 2020.(AP PhotoRebecca Blackwell)

In other pandemic developments, the governor cited a slight increase in the rate of spread for COVID-19 statewide and more substantially signs of spread in areas including Albuquerque and Sandoval County.

— Virus disrupting Rio’s Carnival for first time in a century 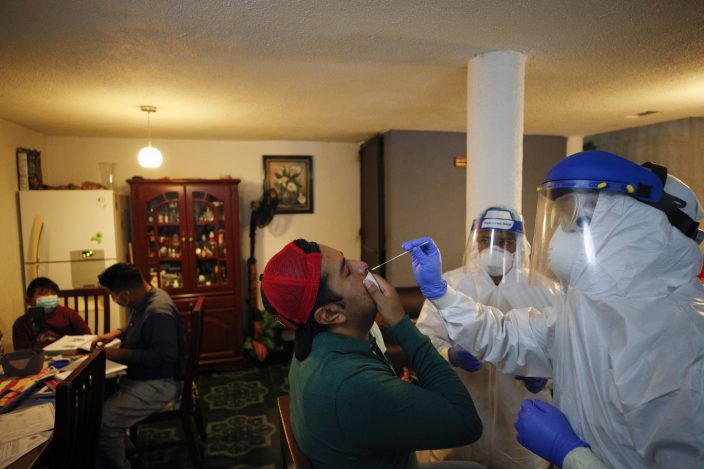 — Israel has moved to further tighten its second countrywide lockdown as coronavirus cases continue to soar. The Cabinet voted on Thursday to close all nonessential businesses, including open-air markets. 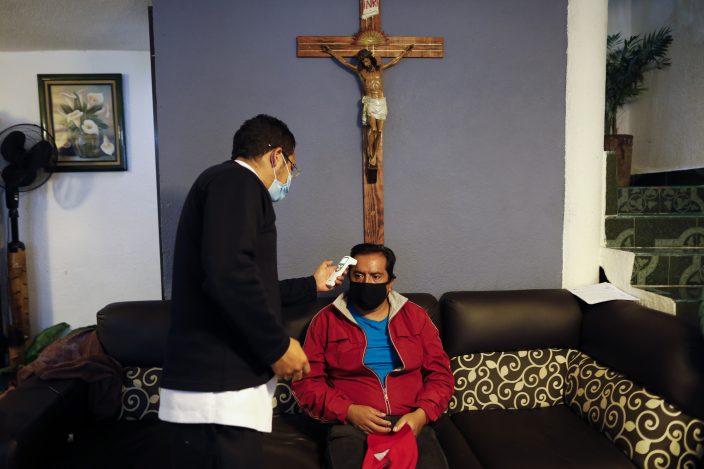 — Swiss health authorities have ordered a quarantine for 2,500 students at a prestigious hospitality school after “significant outbreaks” of COVID-19 that are suspected to be the byproduct of off-campus partying.

— Health authorities are asking Madrid residents to brace for tough weeks ahead as a sustained coronavirus spread that is hitting the Spanish capital hard brought the country’s total infections over the 700,000 mark. 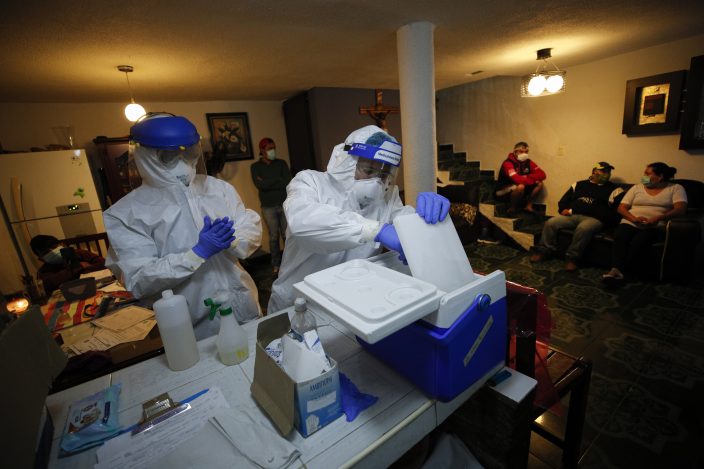 PHOENIX — Arizona will provide the state’s three public universities with $14 million in additional funding to boost their efforts to test, track and respond to the coronavirus.

Gov. Doug Ducey said Thursday the money will help the universities build on their current efforts to track and contain the virus. 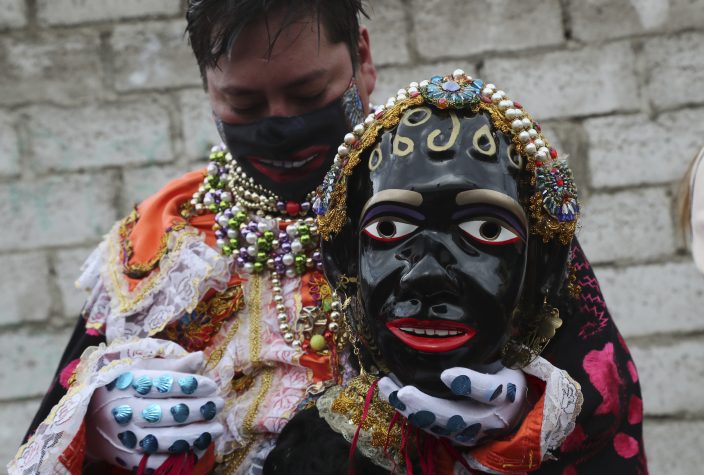 Luis Chacon, the person playing the character of Mama Negra takes a break during the festival in honor of the Virgin of Las Mercedes in Latacunga, Ecuador, Thursday, Sept. 24, 2020. The Mama Negra festival dates back to 1742 when the people of Latacunga ask the Virgin of Las Mercedes to protect them from the eruptions of the neighboring Cotopaxi volcano. Today the festival took place despite the new coronavirus pandemic restrictions and devotees asked the virgin to protect them from the disease. (AP PhotoDolores Ochoa)

The funding comes as Arizona hospitals continue to get a break from the influx of coronavirus cases that nearly overwhelmed their ability to care for patients early in the summer. The state reported 566 new confirmed cases Thursday, bringing the total since the pandemic hit to 215,852. The state also announced 34 new deaths, bringing that total to 5,559.

NEWARK, Del. — Officials at the University of Delaware say they are moving to cut personnel costs because of the financial effects of the coronavirus pandemic.

School President Dennis Assanis said Thursday that without cost cutting, the university would have a $250 million gap between revenues and expenses this academic year. He says the school already has eliminated most discretionary expenses for this year and plans to draw $100 million from its endowment, but personnel actions must now be taken. 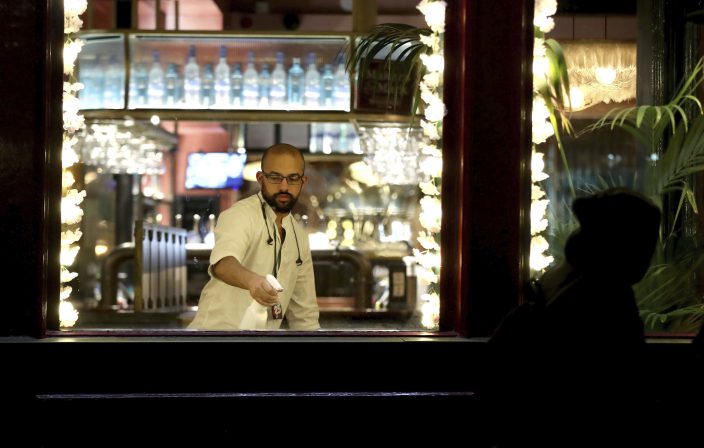 A barman at the Seven Stars pub in Brighton, England, cleans the bar area after closing by 10 p.m. per the curfew Thursday, Sept. 24, 2020. To control the spike in infections, the government on Tuesday introduced new restrictions, including a 10 p.m. curfew for bars and restaurants and lower crowd sizes for weddings. (Gareth FullerPA via AP)

The new effort includes a voluntary retirement incentive program and encouragement for employees to temporarily scale back their work hours. But Assanis says planning is also underway for non-voluntary layoffs as well.

TALLAHASSEE, Fla. -- Florida Gov. Ron DeSantis says he will seek a “bill of rights” for college students in the wake of crackdowns on parties and other social gatherings that some people blame for a surge in coronavirus cases at campuses across the country.

DeSantis said Thursday that he understands university officials are trying to curb transmission of the virus, but added that he considers it "dramatically draconian that a student could get potentially expelled for going to a party.” 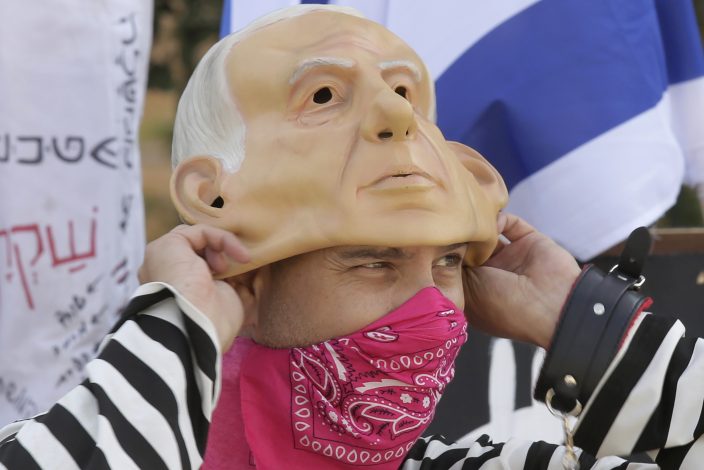 A protester wears a bandana as a face mask as he pulls on a rubber mask representing Israeli Prime Minister Benjamin Netanyahu outside of the Knesset in Jerusalem, Thursday, Sept. 24, 2020, after Israel moved to further tighten its second countrywide lockdown as coronavirus cases continue to soar. Prayers during the ongoing Jewish High Holidays, as well as political demonstrations, would be limited to open spaces and no more than 20 people, and participants would have to remain within the restricted distance from home. (AP PhotoMaya Alleruzzo)

The governor also says he will move to block local governments from again closing restaurants. He says there is little evidence such closures have slowed the spread of the coronavirus.

Florida reported 2,541 more confirmed cases Thursday, bringing the statewide total to more than 693,000. The state also reported 177 more deaths from COVID-19, raising the toll in Florida to at least 13,795.

ANCHORAGE, Alaska -- The Iditarod Trail Sled Dog Race was one of the few major sporting events not canceled in March as the coronavirus began to take hold in the U.S. And now race officials now planning for every contingency possible as they make plans to hold the race again next March.

Iditarod CEO Rob Urbach says getting mushers from one checkpoint to another along the 1,000-mile trail in Alaska is the easy part.

He says the main focus for planners is protecting residents in Alaska villages that serve as checkpoints and the roughly 1,800 volunteers needed to stage the race. He says the goal is zero community transmission.

The Oregon Health Authority reported 382 newly confirmed cases Thursday, raising the total for the pandemic to 31,865. The death toll is 539.

Nearly 25% of the cases reported Thursday were in Multnomah County, Oregon’s most populous county and home to Portland.

LANSING, Mich. — Leaders of Michigan’s three biggest research universities say online teaching will likely last for the entire academic year, keeping many students out of classrooms until next fall.

University of Michigan President Mark Schlissel says development of coronavirus vaccines will be important for any return to normal in-class instruction. Only about 20% of the university’s classes now are in-person.

M. Roy Wilson of Wayne State says the winter semester will look like the current term because the pandemic “is going to be with us for a while.”

Most classes at Michigan State have been online since March.

DES MOINES, Iowa — Iowa school districts have sent hundreds of students home for quarantine or isolation after coronavirus outbreaks, while a high school has switched to online classes after a fourth of students were absent amid a surge in cases.

State officials on Thursday reported 1,341 newly confirmed cases across the state in the previous 24 hours, along with six additional deaths.

North Scott High School has gone to all online instruction because its absentee rate surged to 23% since school started Sept. 1.

SPRINGFIELD, Mo. — Hospitals in Missouri’s third-largest city are approaching capacity due to a surge in coronavirus cases.

Officials at Springfield’s two major hospital systems, CoxHealth and Mercy, told the city council they are running out of staff and capacity, according to a report in the Springfield News-Leader.

Missouri is dealing with a surge in new coronavirus cases, with 1,580 more confirmed cases reported Wednesday. That puts the state’s total for the pandemic at 116,946. More than 100,000 of those cases have been reported since the state reopened for business in mid-June.

Among the new cases are Gov. Mike Parson and his wife, Teresa. Their positive tests were announced Wednesday.

PARIS — France’s health agency announced Thursday evening that the country has had 52 new reported deaths and has over 16,000 new reported cases of coronavirus in 24 hours.

The number of new infections -- 16,096, up from 13,072 the day before -- is among highest recorded figures in France of coronavirus transmissions since widespread and large-scale COVID-19 tests in France began this summer, according to Public Health France.

Around 10 millions tests have so far been carried out.

SIOUX FALLS, S.D. — South Dakota reported a record number of new COVID-19 cases and hospitalizations for the second consecutive day as the state continued to see some of the nation’s fastest spread of COVID-19.

The Department of Health reported 463 new cases and 194 people hospitalized with COVID-19. Health officials also reported eight deaths, one of the largest single-day death tallies during the pandemic.

The new records in coronavirus numbers come two days after Gov. Kristi Noem on Twitter described the spread of COVID-19 as having “peaked” in the state. Her administration plans to continue to rely on people making personal decisions to stop the spread.

Over the last two weeks, the state has reported the nation’s second-highest number of new cases per capita. The rolling average number of daily new cases has increased by about 49% in that time.

But the surge in cases has not stopped Noem from pitching the state as a tourism destination. In a video posted on Twitter this week, she shoots at what appears to be a pheasant and says, “Less COVID, more hunting. That’s the plan for the future.”