The Jaguars allowed a touchdown on the game’s opening drive for the third straight week, leaving them in another hole before quarterback Gardner Minshew even stepped on the field. This one set the tone for a 31-13 loss to Miami on Thursday night.

The Jags won the coin toss for the third consecutive outing, and Marrone opted to put his defense on the field first. It backfired again. 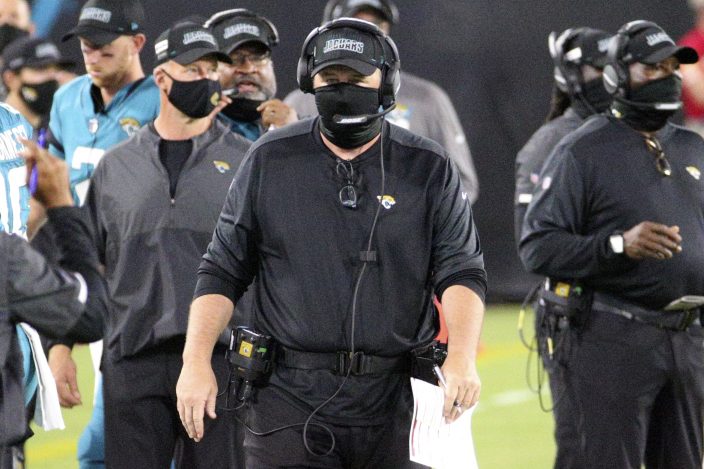 Jacksonville Jaguars head coach Doug Marrone, center, walks the sidelines during the first half of an NFL football game against the Miami Dolphins, Thursday, Sept. 24, 2020, in Jacksonville, Fla. (AP PhotoStephen B. Morton)

The unit looked downright lost, leaving some to wonder what defensive coordinator Todd Wash and his guys are even doing to prepare for opponents.

“It’s disappointing and it’s something that we’re going to be working on,” Marrone said. “Obviously, that puts you in a bind. You never feel like you’re in a rhythm of a game. I think we all understand that. It’s not something that we’re looking at and trying to defend. We just have to find a way to get better at it.”

Miami (1-2) marched 84 yards on 12 plays, taking a 7-0 lead on Ryan Fitzpatrick’s touchdown pass to Preston Williams. The Dolphins scored touchdowns on their next two possessions, too, opening up a 21-7 lead that was too much for Jacksonville (1-2) to overcome in a 31-13 loss.

It wasn’t a whole lot different from the first two weeks.

Indianapolis covered 63 yards on seven plays in the season opener at Jacksonville and scored on the initial drive. The Colts had a chance to go up 14-0, but Abry Jones stuffed Nyheim Hines at the goal line on a fourth-down run.

Tennessee made it look even easier against the Jaguars last week, taking advantage of play-action passes and burning second-year safety Andrew Wingard twice in three plays. Ryan Tannehill connected with Jonnu Smith for gains of 63 and 13 yards, the second one resulting in a score. The Titans scored on their next drive to go up 14-0.

“We talked about it in the locker room,” linebacker Joe Schobert said. “We have to come to the stadium and be locked in and ready to go. As a defense, we have to be better than that. When we come out of the gate, we have to be faster.”

Getting gouged early and often is far from ideal. But it was somewhat expected for Jacksonville. After all, the team revamped much of its defense in the offseason and had a number of preseason issues.

Two defensive linemen opted out because of the coronavirus pandemic. Two more landed on injured reserve early in camp. Two more ended up on the retirement list, including defensive tackle Rodney Gunter. And two more are suspended for at least the first four games.

Throw in other woes — defensive end Yannick Ngakoue was traded a week before the opener, safety Jarrod Wilson was placed on injured reserve after Week 1 and cornerback Rashaan Melvin also opted out — and the Jaguars don’t appear to have any quick fixes.

“Obviously we’re not executing well,” Marrone said. “I think that’s the first thing you’ve got to look at. We have to see what we can do to help.”

Putting the offense on the field might be Marrone’s most viable solution.

“I think that’s something that I’ll look at it,” Marrone said. “We’ve got to see what we can do to help.”

US consumer spending rose a moderate 1.4% in September

The high-altitude training camp in ...