The party was going strong: traditional music blared, families cheered, throngs of revelers danced. Then, police burst in. Officers kicked out guests, slapped hefty fines — even locked up the tuxedoed groom and singers.

In recent weeks, such unhappy endings to long-awaited weddings have become a common story in the Arab world, as resurgent coronavirus caseloads trigger tough police action.

Still, in a region where marriage is the cornerstone of society — the gateway to independence and the only culturally acceptable context for a sex life — couples are plowing ahead, despite the deadly risks. From the Palestinian territories to the United Arab Emirates, officials attribute a spike in virus cases to traditional, large-scale weddings that flout public health measures.

A Palestinian groom is thrown in the air during a wedding party in Azmut near the West Bank city of Nablus, Thursday, Sept. 24, 2020. In a region where marriage is the cornerstone of society, couples are plowing ahead with weddings, despite the deadly risks. From the Palestinian territories to the United Arab Emirates, officials attribute a spike in coronavirus cases to traditional, large-scale weddings that flout public health restrictions. (AP PhotoMajdi Mohammed)

In Jenin, in the northern West Bank, Mustafa Khatib and six of his band members spent two nights in jail for serenading a crowded wedding party this month. Police fined the group $11,000.

Mohammed Abu al-Naji, another singer, was released from detention only after pledging to stop singing until the pandemic ends. 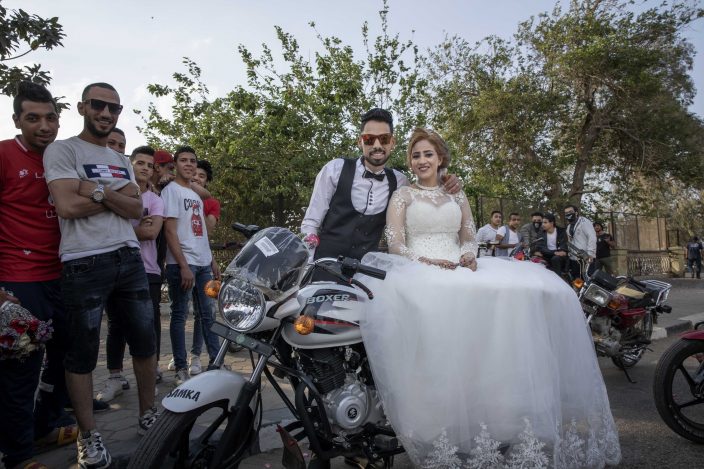 FILE - In this April 16, 2020 file photo, newlyweds are surrounded by their friends as they celebrate before a curfew imposed as a prevention measure against the coronavirus pandemic, in Cairo, Egypt. In a region where marriage is the cornerstone of society, couples are plowing ahead with weddings, despite the deadly risks. From the Palestinian territories to the United Arab Emirates, officials attribute a spike in coronavirus cases to traditional, large-scale weddings that flout public health restrictions. (AP PhotoNariman El-Mofty, File)

“There were some 500 people at the party, with no protection whatsoever,” al-Naji recalled. “I wasn’t happy to be at such a wedding, but I had to,” to make ends meet, he said.

Palestinian authorities have shut down dozens of ceremonies, said police spokesman Loaie Irzekat. Yet the wave of fines, detentions and infections hasn’t stopped determined couples from getting hitched — surrounded by hundreds of their friends.

“You plan to have a small wedding but then all your relatives and friends show up,” explained Qasim Najjar, whose wedding party last weekend in the northern West Bank village of Deir Sharaf was dispersed by police. “This is our custom.” 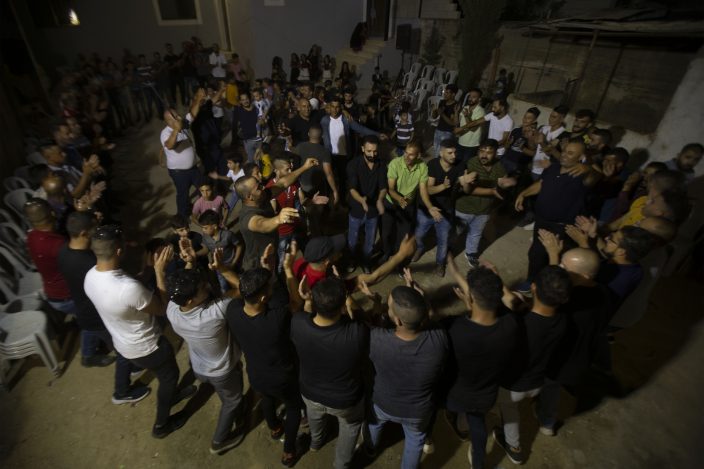 Palestinians celebrate during a wedding party in Azmut near the West Bank city of Nablus, Thursday, Sept. 24, 2020. In a region where marriage is the cornerstone of society, couples are plowing ahead with weddings, despite the deadly risks. From the Palestinian territories to the United Arab Emirates, officials attribute a spike in coronavirus cases to traditional, large-scale weddings that flout public health restrictions.(AP PhotoMajdi Mohammed)

For Arab families, large and lavish weddings mark social status. For newlyweds, the custom of accepting cash-filled envelopes helps them set up homes. For Palestinians, the ritual may run even deeper.

“It’s an existential thing,” said Randa Serhan, a political sociologist at the American University of Beirut, referring to Palestinians living under Israeli occupation or in exile. “If Palestinians stop marrying and procreating, they’ll cease to exist. They don’t have a nation, but they have family.”

The celebrations of life carry potentially fatal consequences. Palestinian Health Ministry official Ali Abed Rabu linked over 80% of new coronavirus infections to large gatherings at weddings and funerals. Indoor wedding halls in conservative towns like Hebron have become vectors of contagion, he said. Coronavirus cases are now surging to new heights. The Palestinian Authority has reported over 34,500 cases in the West Bank and 270 deaths.

In Israel, which is grappling with one of the world’s worst coronavirus outbreaks on a per capita basis, authorities point to large weddings in Arab towns as a leading cause of the virus’ spread. Along with ultra-Orthodox enclaves, known for large weddings and group prayers, Arab communities are among the hardest hit by the virus.

Arab-Israeli lawmaker Ahmad Tibi told The Associated Press that the infection rate in Arab areas has soared from roughly 3% to 30% during the summer wedding season. Israeli citizens, disillusioned after a failed first lockdown, are starting to “disregard government instructions,” he added.

When Egypt’s wedding halls shut down this spring as infections swelled, the wealthy moved their extravagant celebrations to private villas. Working-class Egyptians took their raucous parties to village streets, prompting local police to break up the festivities. But restrictions have relaxed as virus cases waned. Although Egyptian officials still warn of a possible “second wave,” the government announced last week that weddings could resume outdoors and in certified hotels.

In the UAE, daily infection rates reached a four-month peak, prompting a top health official to scold the public for “complacency and negligence.” Dr. Farida al-Hosani, a health ministry spokeswoman, said close to 90% of new cases stemmed from crowds at weddings, funerals and other events.

The Emirati government has intensified its crackdown on illicit bashes. Last weekend, authorities ordered the detention of eight people across the country who had thrown massive, maskless parties. They remain in custody, facing prison terms of up to six months and minimum fines of $27,226 each. In the capital of Abu Dhabi, a groom, his father and father-in-law face prosecution after police broke up their tent wedding and issued $2,700 fines to the guests.

The sleepy northernmost emirate of Ras al-Khaimah has never been a match for Dubai, the glittering city-state known for it is Champagne-soaked nightclubs. Yet the coronavirus has transformed the dusty town into a freewheeling party haven. Early in the pandemic, expatriate party-goers also packed the emirate's hotels to drink and dance. While Dubai now tightly regulates banquets and bans wedding parties, Ras al-Khaimah has reopened wedding halls and loosened restrictions.

Many Dubai event organizers who have seen their incomes vanish are flocking to the little-known emirate.

At Jawaher Wedding Hall in Ras al-Khaimah, workers check guests’ temperatures, serve drinks in plastic cups and encourage social distancing at tables. Twice a week, the hall fills up with some 250 revelers. “These look like normal weddings,” said Lovely Bartolata, an employee. Security guards struggle to prevent guests from dancing.

It's unclear how many Ras al-Khaimah weddings have been linked to COVID-19 because the UAE does not make public information about disease clusters. The emirate’s Department of Economic Development, which enforces anti-virus rules, said the emirate is “one of the first destinations in the world to be certified as safe.” Still, residents fear the gatherings are precisely what health officials warned them about at the start of the pandemic.

“These halls are a problem. This is how the virus spreads,” said Rahmat Allah, manager at Tahani Al Khaleej, a wedding services company in Ras al-Khaimah.

Some Arab couples are defying cultural tradition to follow health guidance. During the Palestinian Authority’s mandated shut-down earlier this year, Baraa Amarneh and Imad Sharaf, desperate to start living together, tied the knot near the southern West Bank city of Hebron, holding hands through latex gloves.

“Without all the neighbors and friends, you’re left with what a marriage is,” she said. “Two people.”

Biden goes on offense in Georgia while Trump targets Mi ...

One week until Election Day, Joe B ...

Gabe Loiacono is the kind of voter ...