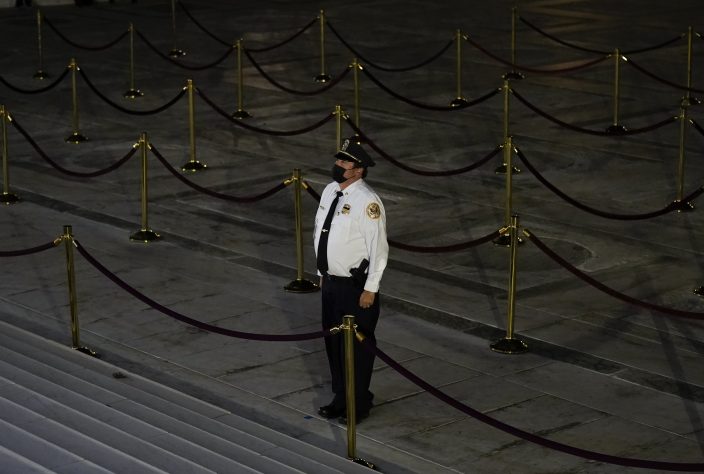 A security guard stops to pay respects after the line of mourners closed as Justice Ruth Bader Ginsburg lies in repose under the Portico at the top of the front steps of the U.S. Supreme Court building on Thursday, Sept. 24 2020, in Washington. Ginsburg, 87, died of cancer on Sept. 18. (AP PhotoAndrew Harnik, Pool)

RACIAL-INJUSTICE-BREONNA-TAYLOR — People dismayed that the officers who shot Breonna Taylor in her apartment during a drug raid last March wouldn’t be charged with her death vowed to persist in their fight for justice. The big question for torn residents of Louisville and the larger issue of racism in America was how to move forward. By Claire Galofaro, Dylan Lovan and Angie Wang. SENT: 930 words, photos, video. With RACIAL INJUSTICE-BREONNA TAYLOR-THE LATEST; RACIAL-INJUSTICE-PROTEST-HIT-AND-RUN — At least one hurt in hit-and-run during Los Angeles protest.

For complete coverage of the Breonna Taylor protests in AP Newsroom. 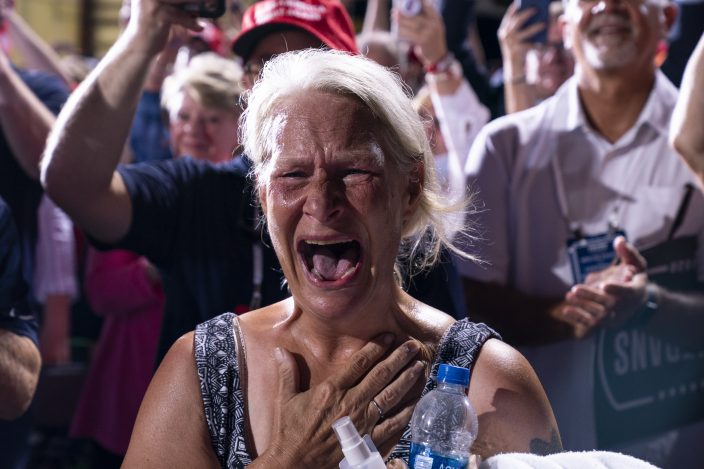 A supporter of President Donald Trump cries as he walks off stage after speaking at a campaign rally at Cecil Airport, Thursday, Sept. 24, 2020, in Jacksonville, Fla. (AP PhotoEvan Vucci)

ELECTION 2020-BIDEN STRATEGY — Since Joe Biden chose Kamala Harris as his running mate on Aug. 11, he has had 23 days where he either didn’t make public appearances, held only virtual fundraisers or ventured from his Delaware home solely for church. Some Democrats say it’s critical that Biden infuse his campaign with more energy. By Will Weissert, Alexandra Jaffe and Alan Fram. SENT: 1,000 words, photos, video. With ELECTION 2020-BIDEN-CLASS WAR — Biden leverages his middle-class background against a billionaire president.

SUPREME COURT-GINSBURG-LYING IN STATE — Supreme Court Justice Ruth Bader Ginsburg becomes the first woman in American history to lie in state in the U.S. Capitol, capping days of commemorations of her extraordinary life. SENT: 360 words, photos. UPCOMING: 700 words after events begin at 10 a.m. With SUPREME COURT-VACANCY — Trump is closing in on his Supreme Court pick. 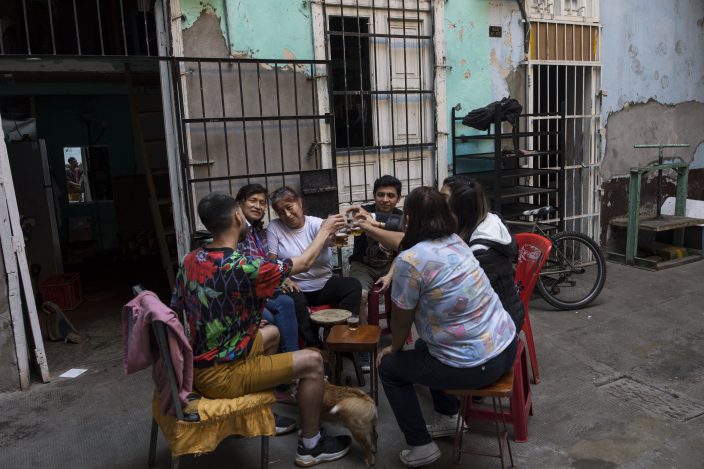 Relatives of Victor Arguelles, who died from COVID-19 complications at the age of 58, toast to his memory during his wake at his house in Lima, Peru, Thursday, Sept. 24, 2020. (AP PhotoRodrigo Abd)

VIRUS-OUTBREAK-BRAZIL-CARNIVAL — A cloud of uncertainty that has hung over Rio de Janeiro throughout the coronavirus pandemic has been lifted, but gloom remains — the annual Carnival parade of flamboyant samba schools won’t be held in February. And while the decision is being characterized as a postponement of the event, no new date has been set. By Marcelo De Sousa. SENT: 1,010 words, photos. 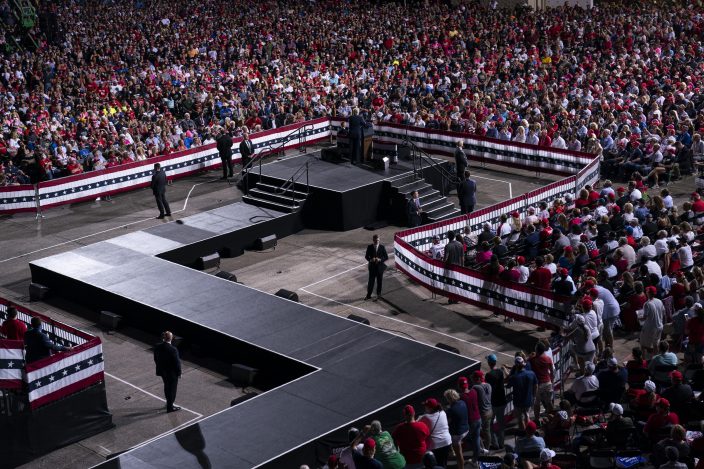 VIRUS-OUTBREAK-MILESTONES-ISRAEL-VIRUS-CZAR — It hasn't been easy for Israel's leading public health expert who had been hailed as the country's best hope for halting a fast-growing number of coronavirus cases. An AP Interview. By Tia Goldenberg. SENT: 1,070 words, photo. 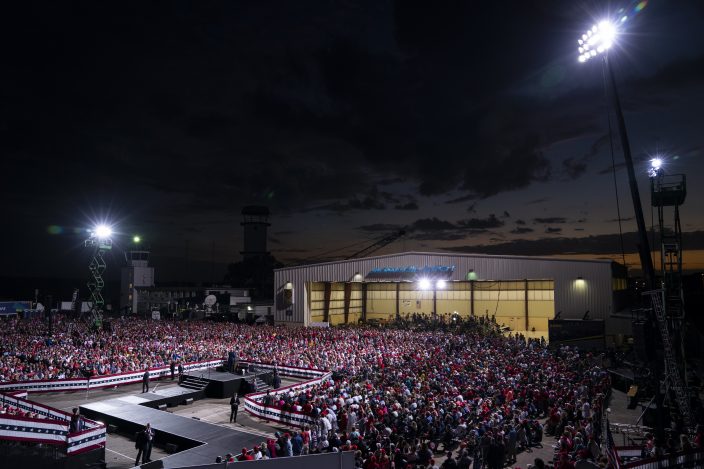 EASTER ISLAND-SIX MONTHS STRANDED — For people around the world, the coronavirus has caused distressing separations and delayed homecomings, but the situation for a group of 25 residents from remote Easter Island stands out. SENT: 820 words, photo.

VIRUS-OUTBREAK-CHINA-VACCINE — A Chinese pharmaceutical company says the coronavirus vaccine it is developing should be ready by early 2021 for distribution worldwide, including the United States. SENT: 560 words, photos.

Mourners pay respects as Justice Ruth Bader Ginsburg lies in repose under the Portico at the top of the front steps of the U.S. Supreme Court building on Thursday, Sept. 24, 2020, in Washington. Ginsburg, 87, died of cancer on Sept. 18. (AP PhotoJose Luis Magana)

VIRUS OUTBREAK-ASIA — India reports another 86,052 coronavirus cases in the past 24 hours, a declining trend with recoveries exceeding new cases this week. SENT: 360 words, photos. With VIRUS-OUTBREAK-THE-LATEST. 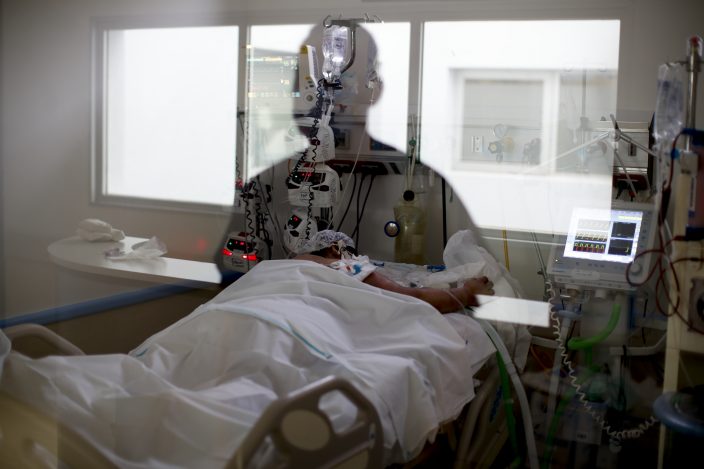 An intensive care unit nurse, reflected in a window, looks in on a COVID-19 patient, at the El Cruce Dr. Nestor Carlos Kirchner Hospital, on the outskirts of Buenos Aires, Argentina, Tuesday, Sept. 15, 2020. Healthcare workers in Argentina warn that they are being pushed beyond their limits as they care for a growing number of new coronavirus patients with limited human resources as isolation measures are relaxed. (AP PhotoNatacha Pisarenko)

TRUMP-TAXES — A federal appeals court is set to hear arguments in Trump’s long-running fight to prevent a top New York prosecutor from getting his tax returns. SENT: 340 words, photos.

POLICE-SHOOTING-WISCONSIN — A 17-year-old accused of killing two protesters days after Jacob Blake was shot by police in Kenosha, Wisconsin, faces a hearing on whether he should be sent to Wisconsin to stand trial on homicide charges that could put him in prison for life. SENT: 750 words, photo. UPCOMING: Hearing at 10 a.m.

PORTLAND PROTESTS — A fire was set to the outside of a police union building, leading authorities to declare an unlawful assembly as Portland, Oregon, grapples with another night of protests over racial injustice. SENT: 260 words, photos.

FEDERAL-EXECUTIONS — A man who killed a religious couple visiting Texas from Iowa was executed, the first Black inmate put to death as part of the Trump administration’s resumption of federal executions after a nearly 20-year pause. By Legal Affairs Writer Michael Tarm. SENT: 1,110 words, photos.

TURKEY-GREECE-MIGRANTS — Shortly after reaching the Greek island of Lesbos, a group of Afghan migrants say, their hopes for a new life in Europe were cut short when Greek authorities rounded them up, mistreated them, shoved them into life rafts and abandoned them at sea. SENT: 1,200 words, photos.

PAKISTAN-HINDU RALLY — Pakistan’s minority Hindus rally in Islamabad, briefly clashing with the police, to protest the deaths of 11 members of a Hindu migrant family who died in India last month under mysterious circumstances. SENT: 420 words, photos.

AUSTRALIA-CHINESE DETENTION — China appears to be expanding its network of secret detention centers in Xinjiang, where predominantly Muslim minorities are targeted in a forced assimilation campaign, and more of the facilities resemble prisons, an Australian think tank finds. SENT: 490 words.

FINANCIAL-MARKETS — Asian shares other than those in China advanced, cheered by a modest rally on Wall Street and rising hopes for fresh stimulus for the U.S. economy. By Business Writer Yuri Kageyama. SENT: 560 words, photos.

VIRUS-OUTBREAK-COLLEGE-SPORTS — The Pac-12 has set a Nov. 6 start date for a seven-game football season, following the Big Ten in overturning its August decision to postpone until spring because of concerns about playing through the pandemic. By College Football Writer Ralph D. Russo. SENT: 1,050 words, photos.

GAMBLING COWBOYS — Mike McCarthy has made some risky moves in his first two games as coach of the Dallas Cowboys, but don’t call it “gambling.” By Pro Football Writer Schuyler Dixon. SENT: 820 words, photos.