A woman has filed a suit against the Roman Catholic Church in Japan alleging that a priest raped her four decades ago, as the church's unfolding worldwide sexual abuse crisis gradually reaches Japan.

The civil lawsuit, filed this week in Sendai District Court, seeks 56.1 million yen ($534,000) in damages. It accuses a priest, who has not been charged or penalized, as well as a bishop who counseled the woman in recent years about the alleged abuse.

The suit, which also accuses the Diocese of Sendai in northeastern Japan, says the church refused to take the complaints seriously, causing psychological pain. 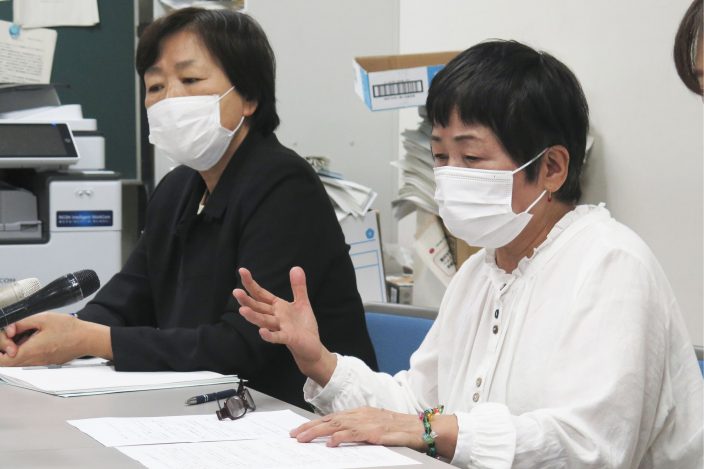 Harumi Suzuki, right, speaks during a press conference in Sendai, northern Japan, Thursday, Sept. 24, 2020. Suzuki has filed a suit against the Roman Catholic Church in Japan alleging that a priest raped her four decades ago, as the church's unfolding worldwide sexual abuse crisis gradually reaches Japan. (Kyodo News via AP)

“I have filed this lawsuit to claim back the dignity I have lost, and to try to end this serious crime that is a violation of humanity,” said Harumi Suzuki, who has gone public with her name.

She said she lived through “more than 40 years of hell,” but wants to raise her voice for other abuse survivors.

“You are innocent, and you are not alone,” she said in a statement.

The Rev. Shiro Komatsu at the Sendai diocese said it has no comment because it has not seen the lawsuit.

Documents seen by The Associated Press show the diocese carried out an investigation by third-party lawyers into her case in 2016.

The investigation determined that the sexual act likely occurred but decided no criminal or civil responsibility could be pursued, given the passage of time and that the priest may have thought the act was consensual. Suzuki denies she consented.

The bishop, Martin Testuo Hiraga, who met often with Suzuki, has said it was hard to arrive at a solution and the priest has denied the allegations. The priest was not available for comment.

The priest is identified in the lawsuit, but lawyers for Suzuki requested that his name not be reported, for fear of a possible defamation lawsuit under Japanese law.

Suzuki, a Catholic, was a victim of domestic violence in 1977 and turned to the priest for consolation, according to the lawsuit. She was raped in the upstairs bedroom of the church during a counseling session, and suffered depression for years, it says.

“The Catholic Church is a giant organization of power for the believers and has their unconditional trust,” the lawsuit says. “Sexual violence by the clergy on members of the congregation is an extremely despicable act that takes advantage of the absolute inequality in power.”

Pressures are strong in conformity-oriented Japan for women not to speak out against sexual abuse. But the #MeToo movement is gradually starting to take off.

“But I hope this case sends a message about an effort to create change,” Sato said.

“We also want Japanese society to learn more about the problems in the church, its secrecy, its coverups and how perpetrators are going unpunished.”

Tanzania, once envy of the region, watches democracy sl ...

Vote-counting was far from over wh ...