Considered something of a lightweight on foreign policy issues, Japan’s new prime minister has spent much of his career in the shadows, supporting previous leader Shinzo Abe with backroom bureaucratic maneuvers and in largely scripted, sometimes prickly dealings with the media.

That will change Saturday morning (Friday afternoon at the United Nations) when Yoshihide Suga makes his very public debut, albeit virtually and in a prerecorded video, at the U.N. General Assembly, the world’s premier international gathering of leaders.

Don’t expect the earth to shake, though, with resounding rhetoric or wildly innovative ideas to improve Japan's rocky ties with the nations it terrorized in WWII or its decades-long economic malaise. 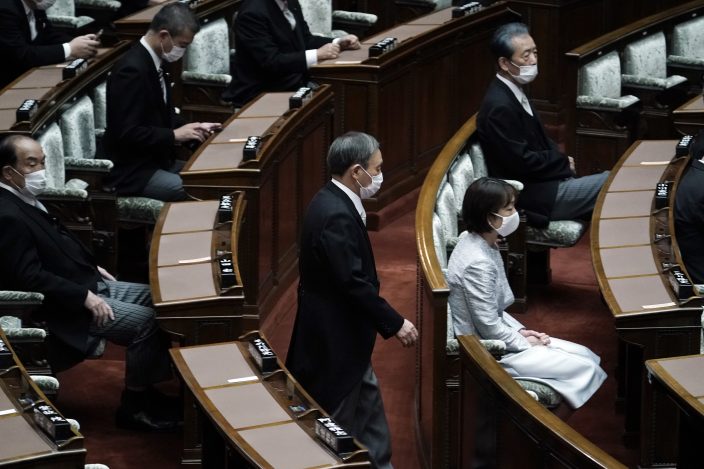 Japan's new Prime Minister Yoshihide Suga walks in to attend an extraordinary session at the upper house of parliament Thursday, Sept. 17, 2020, in Tokyo. Suga started his first full day in office Thursday, with a resolve to push for reforms for the people, and he said he is already taking a crack at it. (AP PhotoEugene Hoshiko)

Much as he’s done domestically in the week and a half that he’s been prime minister, Suga is eager to emphasize that he’ll continue the foreign policy efforts Abe championed in his nearly eight-year rule, the longest of any Japanese prime minister.

Continuity won’t necessarily thrill Japan’s Asian neighbors. Many have been hoping that Suga will distance himself from the hawkish Abe, who regularly questioned the narrative of Japan as a war criminal.

Suga’s cautious approach is largely due to his lack of experience on the world stage, in part because his job as chief cabinet secretary required him to manage disasters and other crises at home. But it also may be linked to his temperament. 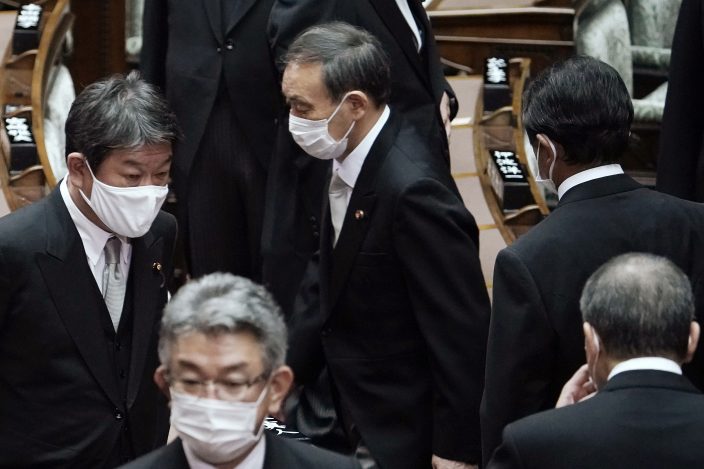 Japan's new Prime Minister Yoshihide Suga, center, walks out after attending an extraordinary session at the upper house of parliament Thursday, Sept. 17, 2020, in Tokyo. Suga started his first full day in office Thursday, with a resolve to push for reforms for the people, and he said he is already taking a crack at it. (AP PhotoEugene Hoshiko)

“He is not a visionary,” according to Jeff Kingston, director of Asian studies at Temple University Japan. He is “a capable lieutenant who will follow Abe’s foreign policy.”

Because of the constraints on travel and face-to-face contact caused by the coronavirus pandemic, Suga also won’t be able to pursue the personal diplomacy that Abe favored and “will muddle along rather than breaking any new ground,” Kingston said.

Suga maintains that he was involved behind the scenes on big foreign policy issues and in building relationships with foreign leaders.

Much as Abe did, Suga will emphasize ties with the United States, Japan’s top ally.

He’s also eyeing several postwar diplomatic goals that have bedeviled a string of prime ministers, including resolving the issue of Japanese citizens abducted by North Korea, with which Japan still has no diplomatic ties.

Suga has praised Abe’s skills in forging personal ties with U.S. President Donald Trump, something he said that he might not be able to do as well. Abe’s close relationship with Trump, much marveled at in the Japanese press, was said to be key to keeping U.S.-Japan ties firm. And Suga may have played a bigger part in building that relationship than is widely known.

In recent comments published in Bungei Shunju magazine, Suga said he was the one who insisted on establishing ties with the Trump side when nobody was seriously expecting a Trump victory.

Suga has also long worked on issues related to North Korea, as well as the contentious issue of U.S. military bases on Okinawa.

“What’s important," Suga said, “is an eye that can see the big picture.”

Behind-the-scenes operations are one thing, but questions still abound about whether Suga, who has not served in key diplomatic or defense posts, will be able to navigate the much more visible arena of high-stakes global diplomacy.

His lack of foreign policy experience is a worry even among his party colleagues, said Tsuneo Watanabe, a Sasakawa Peace Foundation senior research fellow who is an expert on Japan-U.S. relations.

That said, Suga has good contacts with the country’s powerful bureaucrats and with skilled policy advisers in the Foreign Ministry, Watanabe said.

His approach will probably “be pretty much the same as Abe’s,” focused on a stronger security alliance with the United States while balancing economic ties with China, Watanabe said.

Among the other strong pieces of evidence that Suga wants foreign policy continuity with Abe is his appointment of Nobuo Kishi, Abe’s younger brother and a military hawk, as defense minister.

Suga will face perhaps his biggest challenge in trying to settle ties with South Korea. The countries’ trade and political relations plummeted under Abe after Seoul claimed that Abe was whitewashing Japan’s historical crimes.

“If Abe’s successor intends to serve the long-term interest and avoid further deterioration of the Japan-South Korea relations, now is the time to explore the chance for a reset in relations,” Kazuhiko Togo, a former diplomat and a visiting professor at Kyoto Sangyo University, wrote in a recent East Asia Forum article.

At the very least, Suga “is not as reviled in Seoul as Abe, so that might create an opening,” Kingston said, although much will depend on how Seoul handles things, as Tokyo is unlikely to take the initiative.

In some ways, the virtual setup of this year’s U.N. General Assembly might benefit Suga.

He has “vast experience” dealing with scripted media situations, but he is also “sullen and prickly with tough questions," Kingston said, and when he eventually travels as prime minister, he, like Abe, could get in trouble with a more assertive foreign press because he “will not be able to get away with the evasive tactics he favors."

Abe, Kingston said, didn’t achieve much in his years in office, and “Japan remains at risk in its neighborhood, so Suga can’t do much worse on the foreign policy front.”

Foster Klug, AP's news director for Japan, the Koreas, Australia and the South Pacific, has covered Asia at UNGA since 2005. Follow him at www.twitter.com/apklug. Follow longtime Tokyo correspondent Mari Yamaguchi at www.twitter.com/mariyamaguchi