Simplifying the Tokyo Games has been a pledge of the International Olympic Committee and local organizers since COVID-19 forced the unprecedented delay six months ago. Local estimates suggest the delay will cost several billion dollars, most of which will be borne by local taxpayers.

“It's like a glass half-filled, or half empty,” Yoshiro Mori, the president of the organizing committee, said while speaking in Japanese at the end of two days of on-line meetings with IOC officials. 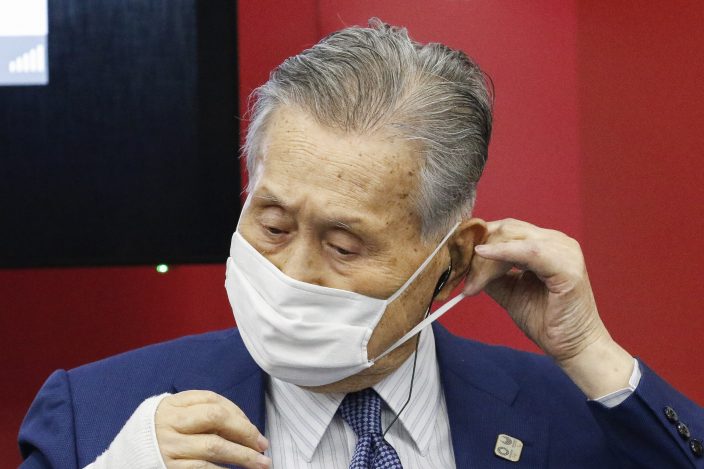 President of Tokyo 2020 Yoshiro Mori wears a face mask before he leaves a joint press conference between the International Olympic Committee (IOC) and Tokyo Organizing Committee of the Olympic and Paralympic Games (Tokyo 2020) Friday, Sept. 25, 2020, in Tokyo. (Rodrigo Reyes MarinPool Photo via AP)

Some will see the cut as positive, and some will have expected much more, Mori said.

The cost savings are a relatively small item with much of the major focus in the next several months on what countermeasures to take against the COVID-19 pandemic. This includes rules for athletes entering Japan, the question of fans at venues, possible quarantines and the availability of vaccines.

All are still up in the air — and might be even into next year.

Mori suggested some might have expected more reductions, but he said major cuts were difficult because of IOC contracts already in place with broadcasters and other stakeholders. Organizers originally talked of 200 items to cut, but have settled initially on 50.

“Maybe we could have done something more bold or daring,” Mori said.

Tokyo organizing committee CEO Toshiro Muto was asked how much was being saved by the simplification.

“We have no figures at hand at this juncture,” he said, adding he hoped to have those details for the IOC executive board when it meets in October.

A report earlier this week by the Mainichi newspaper said the savings would be at most 1-2% of the official operating budget, which is $12.6 billion.

However, a government auditor says the real spending is twice that much, and earlier this month the University of Oxford released a study saying Tokyo is the most expensive Summer Olympics.

Some of the simplifications include: reducing “stakeholder delegation” size by 10-15%; canceling a portion of an IOC meeting that takes place before the Olympics; shortening the main press center availability by eight days; reviewing transportation for stakeholders; canceling the welcome ceremony at the Olympic Village; toning-down the overall look of the venues and Olympic Village; and reducing office space by 14%.

Officials repeated that no cuts would be made to athlete numbers — 11,000 for the Olympics and 4,400 for the Paralympic — nor the number of events.

Other items unlikely to be cut include the 121-day torch relay, which is sponsored by Coca-Cola and Toyota. The opening and closing ceremonies — popular with broadcasters — will also be largely untouched, but the mood will be subdued because of the pandemic.

IOC vice president John Coates, who oversees Tokyo preparations, said some rule changes will have to be made to deal with athletes who might test positive for COVID-19 in Tokyo and be forced into quarantine.

“If an athletes tests positive for COVID, then there has to be a provision to take that athletes out of the games in the same way — not the same stigma, but in the same way we replace athletes with doping problems,” Coates said. “And if we get a vaccine, there will be agreements that they (athletes) will accept vaccines."

IOC President Thomas Bach, addressing Japanese officials on Thursday, suggested a vaccine could be ready for the Olympics, which open on July 23, 2021.

“In the first couple months of next year we will have different vaccines,“ Bach said. “They will be available in very considerable doses.”

He said this could amount to hundreds of millions of doses being available in the first half of the new year.

IOC gets official look at simplification for Tokyo Olympics