Lawmakers said Friday that the U.S. government needs to ban the import of products made with child or forced labor after an Associated Press investigation found widespread exploitation in the palm oil industry, from debt bondage to outright slavery.

U.S. Sens. Sherrod Brown and Ron Wyden —who spearheaded efforts to close a loophole in a federal law that had allowed the import of products made with forced labor— also called on companies that buy goods tainted by labor abuses to be held accountable.

“The federal government needs to enforce this law and investigate all instances of forced labor in supply chains and block imports made with forced labor from coming into the U.S.,” said Brown, an Ohio Democrat. “In addition to strong government enforcement, corporations need to hold themselves accountable.” 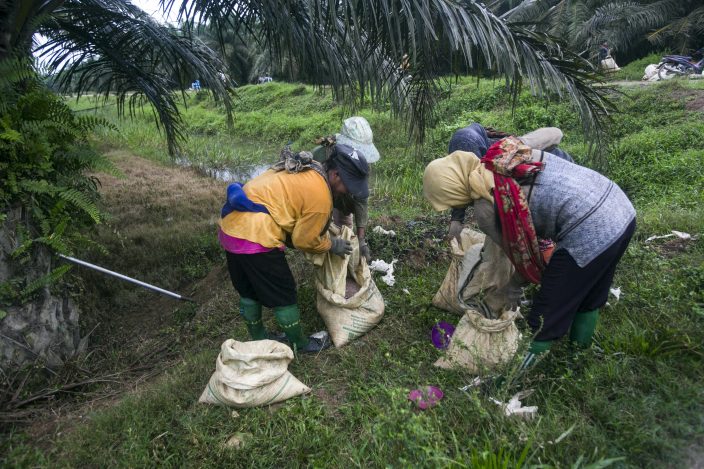 Women fill sacks with fertilizer to be spread in a palm oil plantation in Sumatra, Indonesia, Nov. 14, 2017. Many large suppliers have pledged to root out labor abuses after pressure from buyers who have denounced it. But some workers said they are told to hide or are coached on what to say during auditors' scheduled visits to plantations, where only the best conditions are often showcased to gain sustainability certification. (AP PhotoBinsar Bakkara)

An Associated Press investigation into the $65 billion palm oil industry found labor abuses among an invisible workforce consisting of millions of men, women and children from some of the poorest corners of Asia, including stateless Rohingya Muslims sold onto plantations after fleeing persecution in their homeland. The fruit they harvest makes its way into the supply chains of the planet’s most iconic food and cosmetics companies like Unilever, L’Oreal, Nestle and Procter & Gamble.

Palm oil can be found in roughly half the products on supermarket shelves, from Dove soap and Oreo cookies to instant noodles and hand sanitizer.

Reporters interviewed more than 130 current and former workers from two dozen companies across wide swaths of Malaysia and Indonesia, which together produce 85% of the global supply. They described various forms of exploitation, with the most serious abuses including child labor, outright slavery and allegations of rape.

“With all the technology and tracking capabilities we have now, companies can identify the sources of all the components that go into their products,” Brown said.

The U.S. closed an 85-year-old loophole in 2016 that allowed items produced by child or forced labor overseas to be imported to meet domestic consumptive demand after an AP investigation exposed slavery in the seafood industry, resulting in the freeing of more than 2,000 men.

President Donald Trump has since ordered the U.S. Customs and Border Protection to step up the seizure of unethically produced goods, from seafood and electronics to products believed to have been made by Muslim Uighurs in labor camps in China.

“CBP needs to do its job and investigate credible allegations of products coming into our country that violate U.S. law,” said Wyden, a Democrat from Oregon.

In addition to companies, The AP also found giant Western financial institutions— including Deutsche Bank, BNY Mellon, Citigroup, HSBC and the Vanguard Group— have helped fuel a crop that has exploded globally. The crop soared from just 5 million tons in 1999 to 72 million today, according to the U.S. Department of Agriculture. The U.S. alone has seen a 900% spike in demand during that same time.

Though labor abuses in the palm oil industry have been an open secret for years, most companies and financial institutions with links to it told The AP they do not tolerate human rights abuses and investigate allegations raised about companies that feed into their supply chains, taking appropriate action when warranted.