Housing and Urban Development Secretary Ben Carson inadvertently made public his anger with the White House hiring office when cameras captured writing on the back of a page he was consulting during a speech.

In a reference to the White House Presidential Personnel Office, Carson's notes said: “I am not happy with the way PPO is handling my agency.” The office, run by John McEntee, makes political appointments to federal agency positions.

“I like John and respect what he is doing, however I am sensing a severe (illegible) of trust,” Carson’s notes said. The missing word was blocked in the photograph by a microphone on the podium. 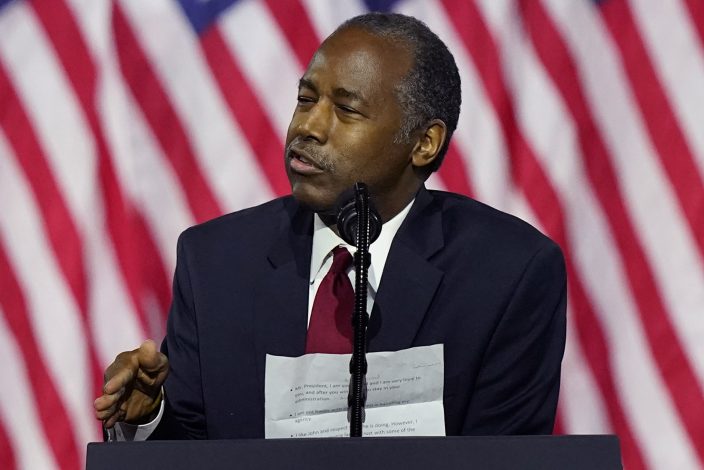 Secretary of Housing and Urban Development Ben Carson holds notes as he speaks during a campaign event before President Donald Trump at the Cobb Galleria Centre, Friday, Sept. 25, 2020, in Atlanta. (AP PhotoJohn Bazemore)

Carson's notes also said: “I am very loyal to you and after you win, I hope to stay in your administration.”

He never uttered any comments about the personnel office during his speech. The notes on his paper were visible in a live video feed of the speech being projected around the room on TV screens as he spoke ahead of President Donald Trump at a campaign event to woo Black voters in Atlanta.

There was no immediate comment from the White House or Carson's office. 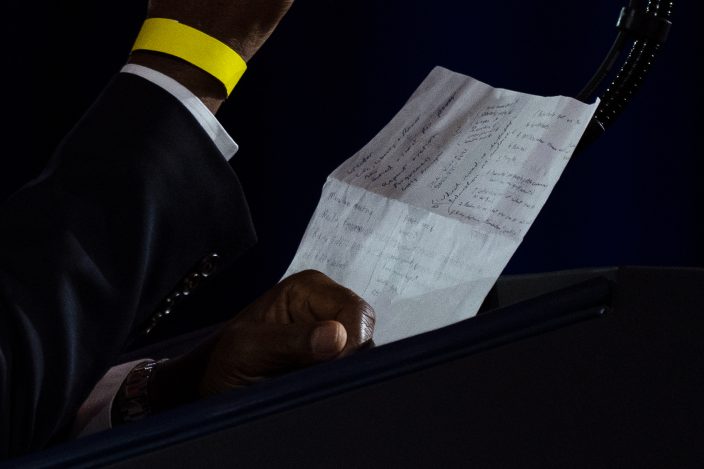 Notes of Housing and Urban Development Secretary Ben Carson are visible as he speaks before President Donald Trump speaks at a campaign event at the Cobb Galleria Centre, Friday, Sept. 25, 2020, in Atlanta. (AP PhotoEvan Vucci)

McEntee's appointment to head the personnel office has been controversial.

He first worked as an intern on the 2016 Trump campaign and then rose to become one of the president’s closest staffers, with an office adjacent to the Oval Office. McEntee had served as Trump’s personal aide until he was forced out of the White House in 2018 on the orders of former chief of staff John Kelly over issues with his security clearance.

McEntee, 30, returned to the White House in early 2019 after being tapped to lead the White House Presidential Personnel Office, an influential posting that coordinates the screening and hiring of thousands of federal government workers. In his job, he is expected to ensure that those offered jobs are loyal and believe in Trump’s presidency. 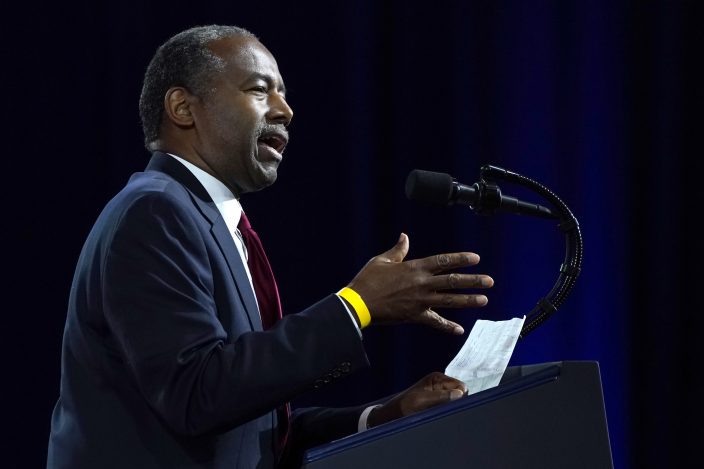