The health minister in Australia's Victoria state has resigned in the fallout from an inquiry into why security guards were used instead of police or the military at quarantine hotels. Lapses in security at the hotels were given as the major reason for a second wave of COVID-19 cases.

Victoria reported just one more coronavirus death as Melbourne’s new case average continued to fall. The death took the state toll to 782 and the national figure to 870. There were 12 new cases, while Melbourne’s 14-day average fell again on Saturday to 23.6.

Melburnians, who have been in lockdown for more than a month, are waiting for the easing of restrictions on Monday. It's expected to include a staged return to school for some students and outdoor gatherings of five people from two households. 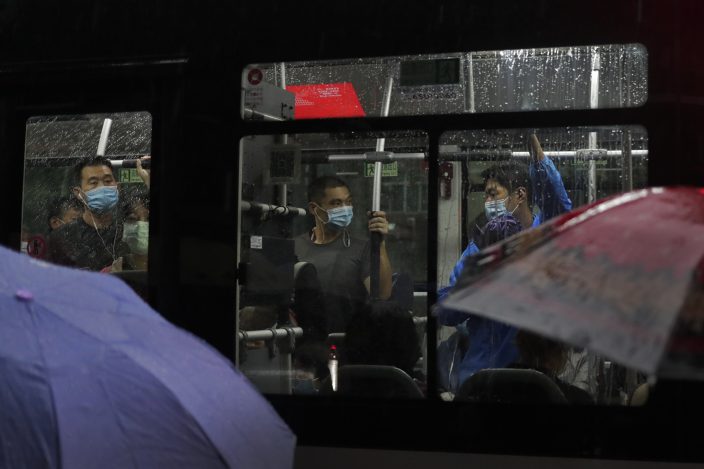 Commuters wearing face masks to help curb the spread of the coronavirus ride on a bus in the rain in Beijing, Wednesday, Sept. 23, 2020. Xi Jinping, China's president and the leader of its Communist Party, cast the fight against the virus as an important exercise in international cooperation, an opportunity to "join hands and be prepared to meet even more global challenges." (AP PhotoAndy Wong)

Health Minister Jenny Mikakos on Saturday issued a statement confirming her resignation, just a day after Victoria Premier Daniel Andrews gave evidence to the inquiry and pointed partial blame at Mikakos for her role in the bungled quarantine program.

“I am disappointed that my integrity has sought to be undermined,” she wrote in a one-page statement. “I have never shirked my responsibility." She said she also plans to resign from Victoria Parliament.

Mikakos appears to be taking the blame when no one else would. After six weeks of hearings into the hotel inquiry, it was still not known who made the decision to use security guards instead of police or soldiers, which were used in other Australian states.

In other developments around the Asia-Pacific region:

— South Korea has reported 61 new cases of the coronavirus, the first time in four days its daily increase came below 100, as officials call for citizen vigilance ahead of a major holiday. The numbers released by the Korea Disease Control and Prevention Agency on Saturday brought the national caseload to 23,516 cases, including 399 deaths. Forty-one of the new cases were reported in the densely populated Seoul metropolitan area, where infections have been linked to churches, restaurants, nursing home and schools. Twelve cases were linked to passengers arriving from abroad, mostly from the Philippines, Indonesia, Uzbekistan, India and Bangladesh. Health officials say the annual Chuseok harvest festival that begins Wednesday and continues through the weekend will be a critical period in the country’s anti-virus campaign. While millions of South Koreans travel across the country during Chuseok every year to visit relatives, officials have pleaded for people to stay home. Nightclubs, bars, buffet restaurants and other establishments deemed as high-risk will be shut down in Seoul during the holiday to reduce gatherings.

Asia Today: Melbourne holds off on easing amid new outbreak