Joey Gallo kept the Houston Astros from clinching the last playoff spot in the AL playoffs at least temporarily, driving home the winning run on a fielder's-choice grounder in the 10th inning for a 5-4 Texas Rangers win Friday night.

The Astros were a strike away from going to the postseason for a franchise-best fourth straight year when Ronald Guzman hit a tying homer in the bottom of the ninth off Ryan Pressly.

Now Houston has to wait to see if the Los Angeles Angels lose at the Dodgers. A loss by the Angels, and the Astros (29-29) clinch second place in the AL West. Their three-year reign in the division was already ended by Oakland. 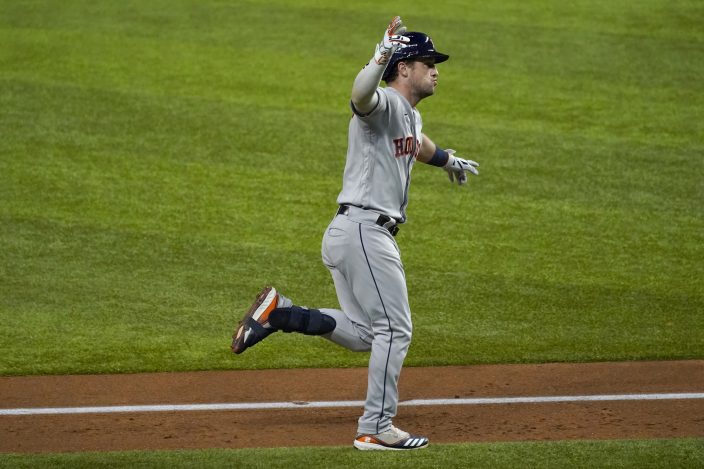 CORRECTS TO ALEX BREGMAN NOT JOSH REDDICK - Houston Astros' Alex Bregman celebrates as he rounds third on his way home after hitting a solo home run on a pitch from Texas Rangers relief pitcher John King in the sixth inning of a baseball game in Arlington, Texas, Friday, Sept. 25, 2020. (AP PhotoTony Gutierrez)

Alex Bregman homered and a had a sacrifice fly that put the Astros ahead 4-3 in the top of the 10th.

Nick Solak matched Bregman's sacrifice fly to get the last-place Rangers even in the bottom of the 10th. Gallo's grounder was fielded by José Altuve, but his desperate throw home was wide, allowing pinch-runner Andrew Romine to score. 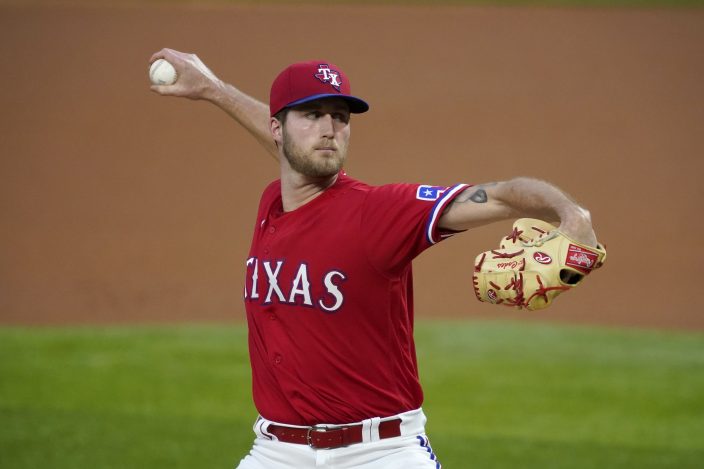 Enoli Paredes (3-3) walked Isiah Kiner-Falefa to start the Texas 10th, and the bases were loaded when first baseman Yuli Gurriel's throw to second was wide on a sharp grounder from Willie Calhoun.

Gurriel put Houston ahead in the eighth with a single before Guzman's tying shot, his fourth of the season.

Chuck Morgan of the Rangers is set to call his 3,000th consecutive game as a major league public address announcer Saturday. Morgan has spent 37 of his 38 seasons with Texas. The other was in Kansas City. It’s hard for him to call it a celebration in a season without fans.

“It would really be much better for me tomorrow night if we had 40,000 people in the ballpark,” Morgan said. “I don’t like it, but I accept it.” 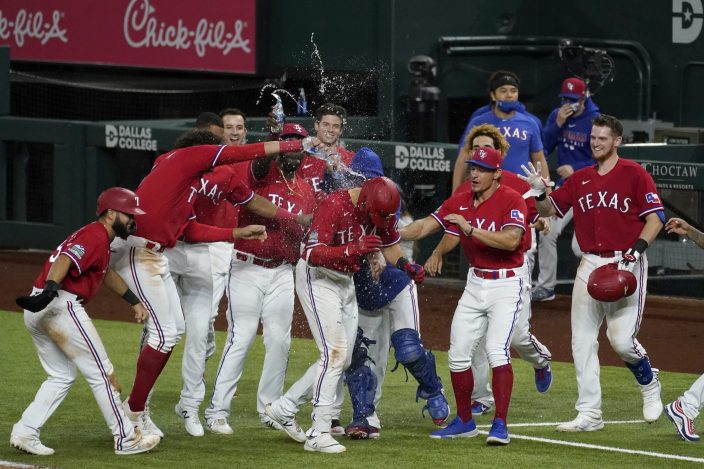 Texas Rangers' Joey Gallo, center, is doused as the team celebrates his baseball game-ending fielder's choice that scored Isiah Kiner-Falefa in the 10th inning of a baseball game against the Houston Astros in Arlington, Texas, Friday, Sept. 25, 2020. (AP PhotoTony Gutierrez)

Astros: RHP Josh James was placed on the 10-day injured list for an unspecified reason, and RHP Chase De Jong was brought up from the taxi squad. 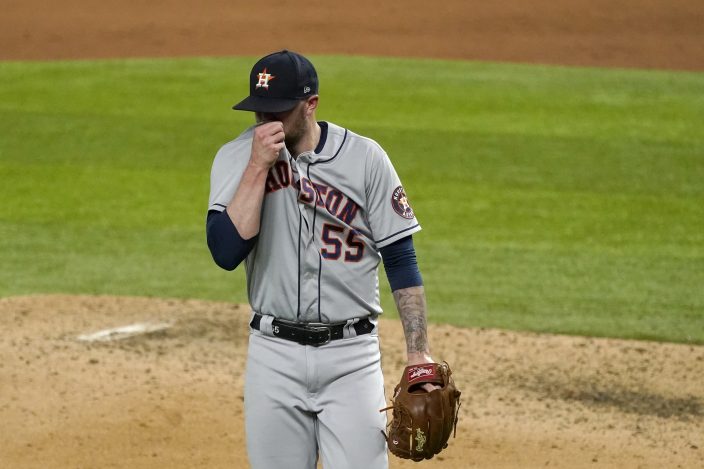 Houston Astros' Ryan Pressly (55) wipes his face as he walks to the dugout in the ninth inning of a baseball game against the Texas Rangers in Arlington, Texas, Friday, Sept. 25, 2020. Pressly gave up a tying solo home run to Rangers' Ronald Guzman in the inning. (AP PhotoTony Gutierrez)

The Astros didn't say before the game who would start the third game in the four-game series to finish the regular season. RHP Kyle Gibson (2-6, 5.87 ERA) is scheduled to start for the Rangers.