Mark Canha hit a two-out, two-run home run in the 10th inning, lifting the Oakland Athletics to a 3-1 win over the Seattle Mariners on Friday night.

The Mariners had taken a 1-0 lead in the top of the 10th when pinch-runner Dee Strange-Gordon – playing in his 1,000th career game – scored on a passed ball.

The A’s came back with the majors-leading sixth walkoff win. 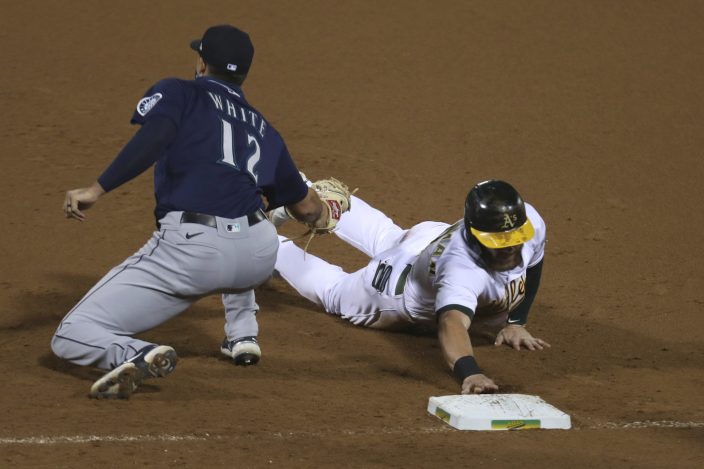 Oakland Athletics' Robbie Grossman, right, is tagged out at first base by Seattle Mariners' Evan White during the seventh inning of a baseball game in Oakland, Calif., Friday, Sept. 25, 2020. (AP PhotoJed Jacobsohn)

Ramon Laureano hit a two-out double to drive in Sean Murphy, who began the inning at second base. Canha followed with a deep drive on a 1-1 pitch from Joey Gerber (1-1) that cleared the fence in right. It was Canha’s second game-ending hit this season.

Both teams were held scoreless through nine innings before the offenses broke through. 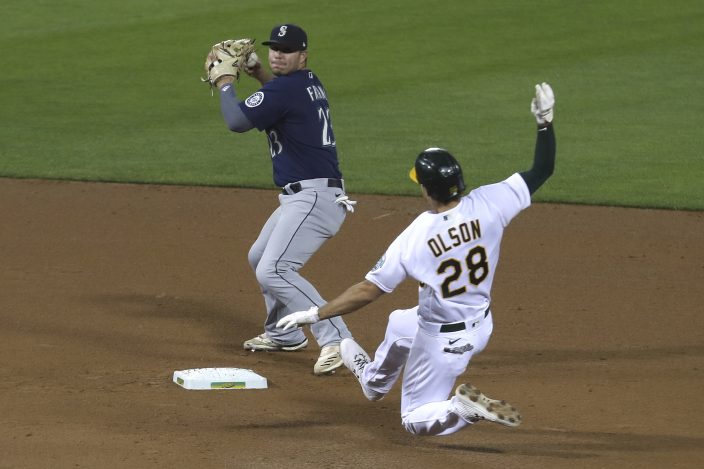 Oakland Athletics' Matt Olson slides into second base as Seattle Mariners' Ty France throws to first base on a double play hit into by Khris Davis during the fourth inning of a baseball game in Oakland, Calif., Friday, Sept. 25, 2020. (AP PhotoJed Jacobsohn)

Gordon put the Mariners ahead 1-0 after sitting on the bench for the first nine innings.

After Strange-Gordon moved to third on pinch-hitter Luis Torrens’ long fly to right, Evan White swung and missed at a pitch from Jake Diekman (1-1), but the ball deflected off catcher Sean Murphy’s glove. Strange-Gordon raced home and slid in safely. 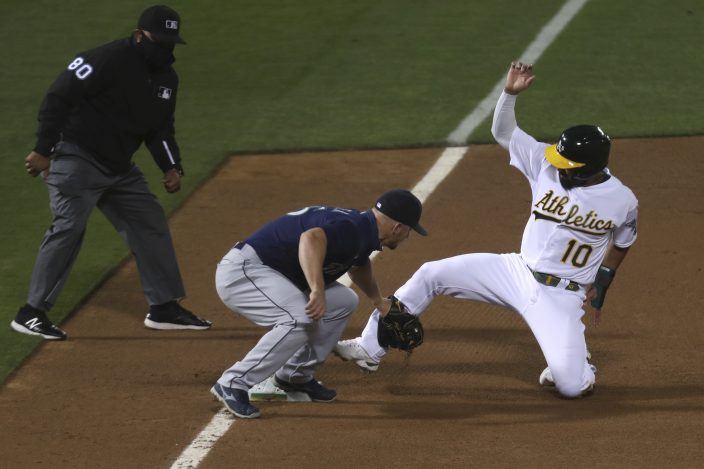 Oakland Athletics' Marcus Semien, right, is tagged out at third base by Seattle Mariners' Kyle Seager, center, during the third inning of a baseball game in Oakland, Calif., Friday, Sept. 25, 2020. (AP PhotoJed Jacobsohn)

Both teams made strong defensive plays in left field in the eighth.

Oakland’s Robbie Grossman ran into the wall after chasing down Joseph Odom’s long fly with two outs. In the bottom half, Seattle’s Tim Lopes also sprinted and made a running catch at the warning track on pinch-hitter Jonah Hein’s deep fly after the A’s had runners on second and third.

Both starters took shutouts deep into the game. 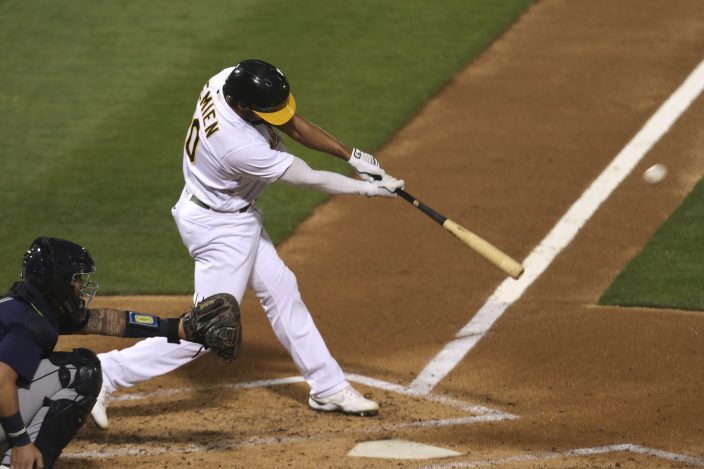 Oakland’s Chris Bassitt struck out six and allowed five hits in seven innings. Bassitt has not allowed a run in three of his last four starts and has a 0.34 ERA (one earned run in 26 2/3 innings) during that stretch.

Seattle’s Yusei Kikuchi worked in and out of trouble to pitch four-hit ball over six innings. Kikuchi struck out five and walked three. Mariners starters have allowed one run or fewer in five of their last six starts.

STARBUCKS INSTEAD OF PLAYOFFS

With Seattle eliminated from playoff contention, the Mariners aren’t facing the same quarantine lockdown restrictions on the road as they had been previously. Major League Baseball’s guidelines for teams in contention are more strict than those that are not. “So you can go to Starbucks down the street and get a cup of coffee in the morning, which I did this morning,” manager Scott Servais said. “I would much rather have stayed in my room and ordered room service, but that’s where we’re at right now.”

The Mariners claimed RHP Ian Hamilton off waivers from the Chicago White Sox and assigned him to Triple-A Tacoma. Hamilton was designated for assignment on Sept. 18 after appearing in four games for the White Sox.

Oakland infielder Tony Kemp was honored with the Dave Stewart Community Service Award, given annually to an A’s player in recognition of his charitable work and donations. Kemp has dedicated his time to helping raise awareness about racial injustice against Black people and has been very active helping community organizations provide resources during Covid-19.

Athletics: The A’s are trying to keep injured 3B Matt Chapman part of the mix despite his season-ending right hip injury that requires surgery. After clinching the AL West, he was part of a video call as Melvin addressed the team. “It’s unfortunate but we try to keep as close contact with him as we can,” Melvin said. “... Even thought he’s not with us on the field it would be great to have him here. He’s such an emotional leader.”

Oakland’s Mike Minor (1-6, 5.92) and Seattle’s Justus Sheffield (4-3, 3.75) pitch in a matchup of lefties in the first game of a doubleheader Saturday. Minor’s only win since joining the A’s earlier this month came against Seattle on Sept. 14. All four of Sheffield’s wins have come in his last seven starts. A’s RHP Paul Blackburn (0-0) makes his season debut in Game 2, while the Mariners counter with RHP Justin Dunn (3-1, 4.20).