Shirley Dixon-Mosley had never sent a ballot through the mail. She always treasured casting her ballot in person. But for November's election, she voted early and by mail because she didn't want to take any chances.

“I want to make sure my vote got in and it counted,” said the 75-year-old retired teacher's aide in Charlotte, North Carolina.

Black voters are among the least likely to vote by mail nationally, but there are early signs they are changing their behavior as the shadow of the coronavirus hangs over the presidential race. The evidence is clearest in North Carolina, the first state in the nation to send out mail-in ballots and where voting has been underway for almost three weeks. But there are hints in other battleground states like Georgia and Pennsylvania. 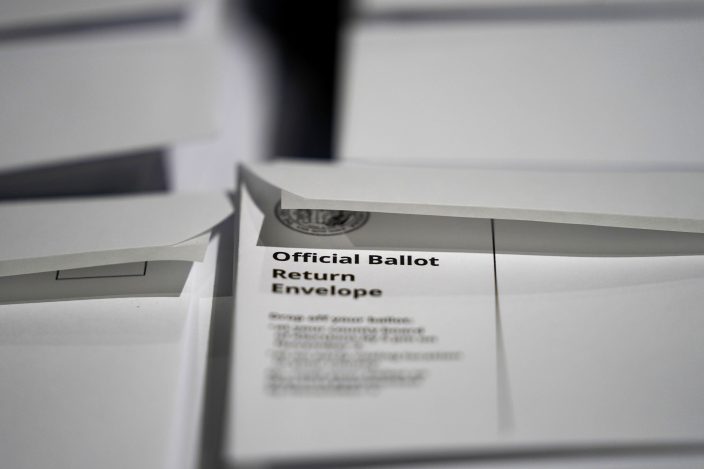 FILE - In this Sept. 3, 2020, file photo, stacks of ballot envelopes waiting to be mailed are seen at the Wake County Board of Elections in Raleigh, N.C. Black voters are among the least likely to vote by mail nationally, but there are early signs they are changing their behavior as the shadow of the coronavirus hangs over the presidential race. The evidence is clearest in North Carolina, the first state in the nation to send out mail ballots and where voting has been underway for almost three weeks. (AP PhotoGerry Broome, File)

The signal are good news for Democrats, who will need a robust turnout by Black voters in these states to win both the White House and control of the U.S. Senate. With coronavirus increasing the risk of in-person voting, African American mail voting rates are one indicator of whether that key part of the Democratic coalition will participate at its regular clip.

“They're changing their dynamics,” said Michael Bitzer, a political scientist at Catawba College in North Carolina who tracks state elections. “It seems like there's a shift going on which will certainly help Democrats.”

But the numbers also come with a warning sign. North Carolina’s Black voters are four times more likely than whites to have their ballots not yet accepted due to missing witness information. Just under 5% of absentee ballots returned by Black voters either still have missing witness information or are in the process of having ballot requirements corrected, compared with just 1.3% of ballots returned by white voters.

It is, of course, very early — the votes so far in North Carolina translate to only about 5% of those cast in the entire 2016 presidential election. It's unclear how much Black voters' early embrace of the new method will increase overall turnout and whether issues will persist as more votes roll in.

Alarmed by the not-accepted figures, Democratic-leaning groups are already shifting their messaging to help Black voters resolve the witness requirements. North Carolina made this process easier on Tuesday, settling a lawsuit from the North Carolina Alliance for Retired Americans seeking to ease absentee guidelines on the state's witness component. County boards of elections now mail an affidavit for a voter to return to resolve ballot problems. Both Republicans on the state's five-person Board of Elections resigned after the settlement.

“There's been a big push to get Black voters to use the option of vote-by-mail,” said Adrianne Shropshire of VoteBlackPac, one of several groups trying to boost the use of mail-in ballots among Black voters. The group sent absentee ballot applications to 400,000 North Carolina voters. “The problems that people are having is related to the fact that this is new to people.”

Jeffrey Brooks, a 49-year-old Democrat from Durham, said he's previously voted in person. But when he sent in his mail-in ballot earlier this month, he failed to have a family member sign it as a witness.

“I didn’t know that,” Brooks said. “I thought it was just for young people. I didn’t get them to sign it because I did it at home. I didn’t know you had to have a witness.”

Voters like Brooks have until Nov. 12 to correct their ballots and get them received by their local county elections board.

Tonya Foreman, an activist whose group CAREE has been registering people to vote in barbershops and a pop-up registration tent in the eastern part of the state, worries that some of these Black voters, already deeply suspicious of a system they see as rigged against them, “will just decide ‘I knew it’ and not fix their ballots.”

Foreman has seen shifts in Black voters' interest and trust in voting by mail, saying it seemed high last spring but then tapered off after controversy over mail delays due to changes at the United States Postal Service.

Black voters have traditionally preferred to vote in-person and see their ballot being accepted, a certainty sought after generations of voter suppression, discrimination and fighting to win the right to vote. In 2018, only 11% of African American voters cast their ballots by mail compared with 24% of white voters, according to the U.S. Census.

But Black people have been disproportionately killed by the coronavirus, and many older Black Americans are now trying to balance safety with their rights, said Marcus Bass, an activist with the group Advance Carolina.

“The most faithful bloc of voters are older Black voters,” Bass said.

Still, Bass' group has acquired 250,000 pieces of protective gear because he thinks many Black voters will want to vote in-person again.

There are hints of the shift in other data on mail voting. In Georgia, about one-third of all absentee ballot requests so far have come from African Americans, slightly higher than their share of registered voters, said Tom Bonier, a Democratic data analyst. In Pennsylvania, 7.38% have — which is also precisely the Black share of that state's electorate.

Bonier said the early data suggests that Democratic investments in educating Black voters about mail-in ballots may be paying off. The rates, he added, are also "an early indicator of very high engagement by Black voters.”

Dixon-Mosley is one of those engaged voters. She was happy to have the option to vote by mail, but she added she would cast her ballot in person if she had to.

“Our parents and forefathers fought too hard to get the vote,” she said. “To not do it is to dishonor them.”

Anderson is a corps member for the Associated Press/Report for America Statehouse News Initiative. Report for America is a nonprofit national service program that places journalists in local newsrooms to report on undercovered issues.