Two decades ago, Florida's hanging chads became an unlikely symbol of a disputed presidential election. This year, the issue could be poorly marked ovals or boxes.

Amid the global coronavirus pandemic, more people than ever are expected to bypass their polling place and cast absentee ballots for the first time. Voters marking ballots from home could lead to an increase in the kinds of mistakes that typically would be caught by a scanner or election worker at the polls.

Experts say that's likely to mean more ballots with questionable marks requiring review. That’s not necessarily a bad thing under normal circumstances, but President Donald Trump has repeatedly questioned the integrity of mail-in voting, and his campaign has already challenged aspects of it in court. 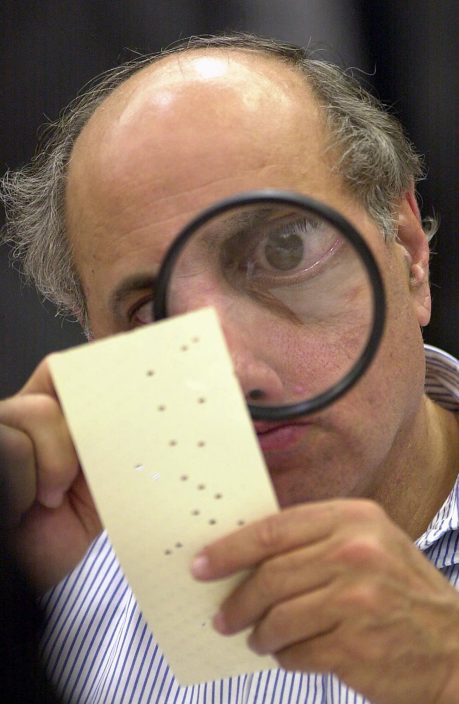 While ballots subject to review have historically represented a tiny portion of overall ballots, it's possible disputes could arise and end up as part of a Florida-like fight, especially in battleground states like Michigan, Wisconsin and Pennsylvania.

“This could be 2000′s hanging chad in Pennsylvania,” said Suzanne Almeida, interim director of the state chapter of the nonpartisan watchdog Common Cause. “Potential challenges, delays in results, questions on which ballots count and who counts them — there are just a lot of questions, and that could open up Pennsylvania to a lot of uncertainty.”

The group is working with election officials statewide, emphasizing clear and consistent guidelines for dealing with questionable marks, such as when a voter circles a name or uses an X or a checkmark rather than filling in the oval — or even crosses out one selection and marks a second. 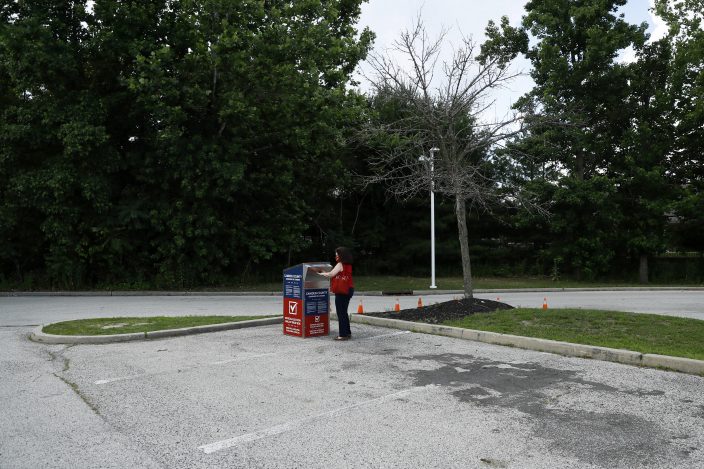 FILE - In this July 1, 2020, file photo, Marianne Carver, of Pennsauken, N.J., drops off her ballot for the New Jersey primary election at a vote-by-mail drop box in a parking lot at Camden County College in Cherry Hill, N.J. Amid the global pandemic, more people than ever are expected to bypass their polling place and cast absentee ballots for the first time. Voters marking ballots from home could lead to an increase in the kinds of mistakes that typically would be caught by a scanner or election worker at the polls. (AP PhotoMatt Slocum, File)

While all states perform ballot reviews and have rules related to voter intent, some have never seen anything like this year’s anticipated absentee ballot volume. In half the states, absentee ballots accounted for less than 10% of votes cast in 2016. Many could see half or more votes cast absentee this fall.

Colorado and Washington, two states accustomed to large volumes of hand-marked ballots, have comprehensive guidelines online detailing how to interpret almost every conceivable way a voter could mark a ballot. Procedures are in place for handling markings that may be disputed by partisan observers.

But when asked for a copy of Pennsylvania's guidelines, state election officials said it would take time to gather and directed The Associated Press to file an open records request. 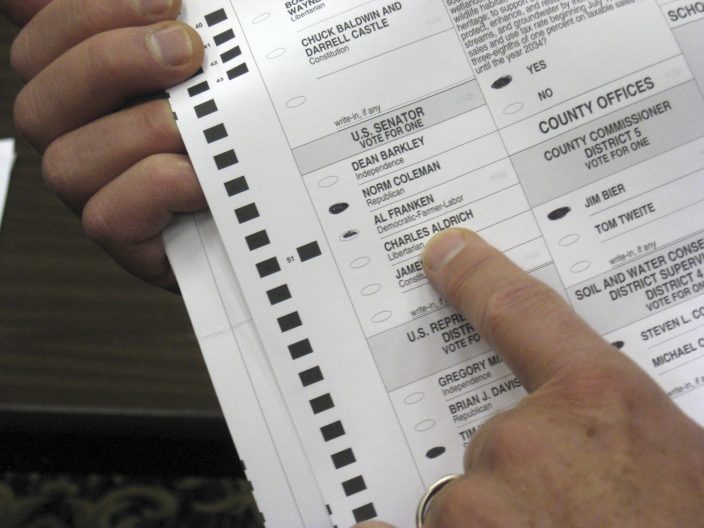 FILE - In this Nov. 19, 2008, file photo, a ballot in Rochester, Minn., with markings next to both candidates, was challenged by both the Coleman and Franken campaigns on the first day of the recount for Minnesota's U.S. Senate election. Amid the global pandemic, more people than ever are expected to bypass their polling place and cast absentee ballots for the first time. Voters marking ballots from home could lead to an increase in the kinds of mistakes that typically would be caught by a scanner or election worker at the polls. (Sea StachuraMinnesota Public Radio via AP, File)

“You don’t want to have a situation where you have one type of mark in a county that is processed and counted and in another it isn’t,” said McReynolds, who now leads The National Vote at Home Institute.

Safeguards built into the nation’s myriad election systems to help voters avoid ballot-marking problems are mostly geared toward in-person voting. Touchscreen voting machines — though considered less secure by cybersecurity experts — do a better job than humans in marking ballots and warning voters if they try to vote twice in the same race.

In-person voting by paper ballot typically involves filling in an oval or box next to a candidate's name. In most places, voters then feed the ballots into a scanner designed to reject so-called overvotes, like attempting to fix a mistake by crossing out a name and filling in the oval next to another candidate.

Such problems during in-person voting are easy to fix. Poll workers invalidate the ballot and give the voter a new one.

"But now, if most people are not voting with machines and are voting at home, they are not going to have that notification,” said Larry Norden, an elections expert with the Brennan Center for Justice.

This fall, as many as three in four voters could be voting on ballots received in the mail. That means following instructions carefully. If voters make a mistake, they should contact their local election office; it may mean requesting a replacement ballot.

Experts point to Georgia’s experience after the June primary as a cautionary tale.

During vote counting, some counties reported what appeared to be valid votes that weren't flagged for review by the state’s new high-capacity ballot scanners, which process large volumes of absentee ballots at once.

It turned out the scanner software was set to flag ballots with between 12% and 35% of an oval shaded. Anything more was automatically counted. Anything less was not. Setting such parameters for ambiguous marks is a common practice.

What’s not common is the confusion.

Jeanne Dufort, who served as the Democrat on the review panel in Morgan County, east of metro Atlanta, said that in previous years absentee ballots represented a small fraction of votes cast and those reviewed had usually been damaged in some way.

But this time the software flagged about 150 ballots out of roughly 3,000 cast. In one case, a voter had marked ovals using a smiley face. The panel also discovered roughly 20 votes that had gone unrecorded and were not flagged for review, Dufort said.

She noted the stakes will be higher in November.

“A vote review panel’s purpose is to make up for the limits of technology,” Dufort said. “It’s a pretty solemn responsibility.”

Georgia has since revised its software so ballots with between 10% and 20% of an oval shaded will be flagged and reviewed. Training videos were also distributed.

Election officials generally laud the software as a technology aide that reduces ballot reviews and increases the likelihood more votes will be counted.

But some experts argue the technology could catch more votes that should be reviewed and ultimately counted if changes were made to scanner settings to improve image quality and resolution.

“The blame is put to the voter, saying the voter was doing something wrong,” Hursti said. “No, the voter was conducting a constitutional right and every other excuse is wrong. Voters have a right to vote."

Meanwhile, some election offices use bipartisan teams to review flagged ballots while others rely on staff or a local board. Citizens can observe, although rules vary on whether they can raise objections. Experts say if the process isn’t consistent with clear guidelines, there could be room for political or legal maneuvering.

“All this doesn’t matter much, until it does,” said Mark Lindeman, co-director of Verified Voting. “It’s unusual for an election to hinge on ambiguously marked ballots, but it can happen.”

A judge on Friday ordered the long ...