Senior officials and survivors paid tribute Saturday to the victims of a deadly neo-Nazi attack on Munich’s Oktoberfest 40 years ago, as Germany’s president warned that far-right extremism remains a persistent problem in the country.

The bombing on the evening of Sept. 26, 1980, claimed 13 lives, including that of three children and the attacker, student Gundolf Koehler, a supporter of a banned far-right group. More than 200 people were wounded.

“Right-wing extremism has deep roots in our society,” President Frank-Walter Steinmeier said at a memorial event in the Bavarian capital. Germany has seen a number of further attacks inspired by anti-Semitism, hatred of foreigners and neo-Nazi ideology in recent years, including a series of far-right killings that police initially attributed to migrant gangs. 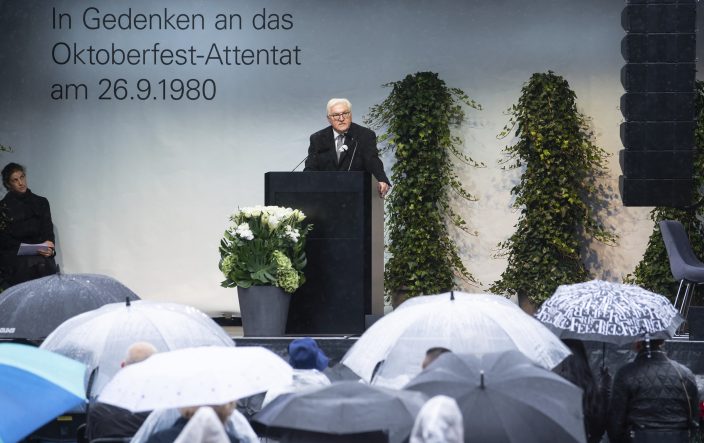 Federal President Frank-Walter Steinmeier speaks at the commemoration of the 40th anniversary of the right-wing terrorist attack on the Oktoberfest at the Theresienwiese in Munich, Germany, Sept. 26, 2020. On the evening of September 26, 1980, a bomb killed twelve visitors to the Oktoberfest and the assassin. More than 200 people were injured. (Sven Hoppedpa via AP)

Steinmeier said the perpetrators weren't “disturbed people,” but rather part of “networks that we need to investigate.”

An initial investigation of the Oktoberfest attack concluded that Koehler acted alone, out of personal frustration. But in 2014, federal prosecutors revisited the case after a previously unknown witness surfaced.

In July, prosecutors said the witness’ indications that there may have been co-conspirators hadn’t been corroborated, but that it was clear Koehler had been motivated by far-right extremism. Victims' lawyers say there are still many unanswered questions about the attack.

Bavaria's governor, Markus Soeder, apologized to survivors and the victims' families for mistakes made during the initial investigation.

Earlier this week, the German government announced it was setting up a 1.2 million-euro ($1.4 million) fund to help survivors of the attack.

A judge on Friday ordered the long ...