The New York Mets were eliminated from the playoffs in a mistake-filled 4-3 loss to the Washington Nationals in the first game of a doubleheader on Saturday.

The Mets (26-32) needed to win their three remaining games and receive help from multiple teams to sneak into the final wild-card spot in the expanded playoffs. But New York couldn’t hold a 3-1 lead in the fourth inning of a seven-inning game and missed the postseason for the fourth straight year.

Andrew Stevenson hit two homers — including one inside the park — for the last-place Nationals, and Max Scherzer (5-4) worked six solid innings to finish with a winning record for the 11th consecutive season, tying Los Angeles Dodgers’ Clayton Kershaw for the longest active streak in the majors. 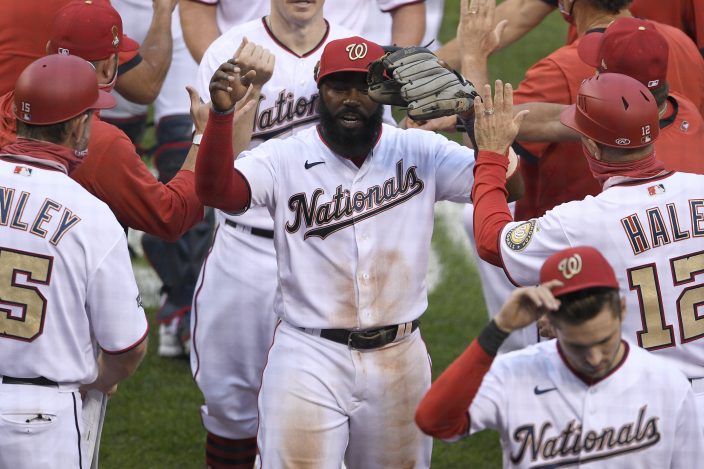 Washington Nationals' Josh Harrison, center, celebrates after the first baseball game of a doubleheader against the New York Mets, Saturday, Sept. 26, 2020, in Washington. The game was a makeup from Sept. 25. (AP PhotoNick Wass)

Wilson Ramos — who played in Washington for seven seasons — hit a two-run homer to center to give the Mets a 2-0 lead in the third. Amed Rosario's solo shot in the fourth, also off Scherzer, made it 3-1.

Andrew Stevenson hit a conventional homer off Jacob deGrom in the third. Washington added a run in the fourth on deGrom's wild pitch.

In the fifth, Mets left fielder Dominic Smith slipped and then collided with the left-field wall trying to catch Stevenson's flyball. Smith stayed down as Stevenson rounded the bases for an inside the park homer. Trainers and teammates came out to attend to Smith, who stayed in the game. 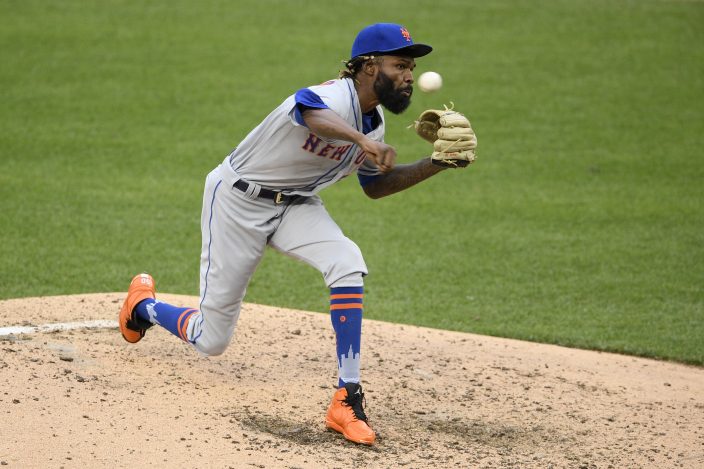 New York Mets relief pitcher Miguel Castro delivers during the sixth inning of the first baseball game of a doubleheader against the Washington Nationals, Saturday, Sept. 26, 2020, in Washington. The game is a makeup from Sept. 25. (AP PhotoNick Wass)

Miguel Castro (2-2) walked Brock Holt to lead off the sixth and Yan Gomes singled, advancing Holt to third. Castro struck out Luis Garcia before manager Luis Rojas brought in Edwin Díaz with one out to face Josh Harrison, whose sacrifice fly to right gave Washington its first lead.

Will Harris worked the seventh for his first save. 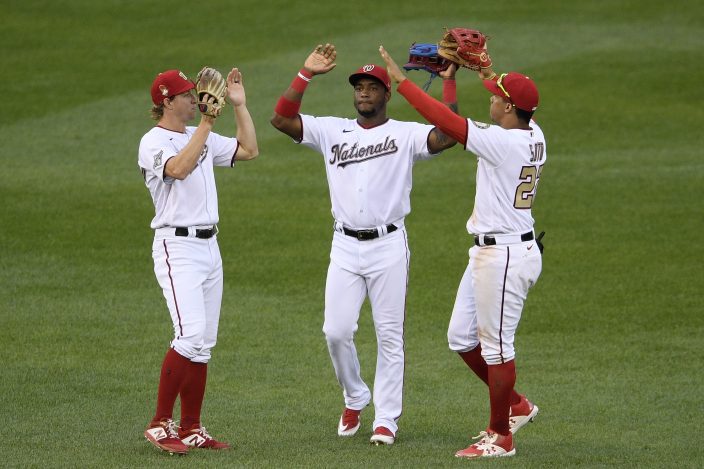 After Friday’s rainout, the Mets headed back to their hotel and kept an eye on what else was going on around the majors, hoping their trip to Nationals Park on Saturday would be meaningful. Jeff McNeil summed up his teammates’ point of view this way: “We just can control what we can control. We need to go out there and win and the rest is not up to us. We kind of put ourselves in a bad situation.”

Before the game, the Nationals announce manager Dave Martinez agreed to a multiyear contract extension, although general manager Mike Rizzo wouldn’t say how many years it adds to the skipper’s deal. “We don’t talk about terms as far as years, length and salaries and that type of thing. We’re comfortable with what we have and the consistency that we’re going to have down the road,” said Rizzo, who recently agreed to a three-year extension of his own. 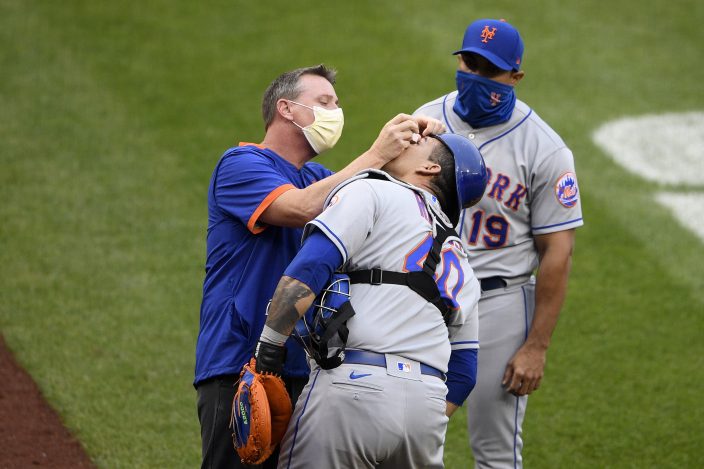 New York Mets catcher Wilson Ramos (40) gets tended to by a trainer as manager Luis Rojas (19) looks on during the sixth inning of the first baseball game of a doubleheader against the Washington Nationals, Saturday, Sept. 26, 2020, in Washington. The game is a makeup from Sept. 25. (AP PhotoNick Wass)

Martinez was hired in 2017 and given a three-year deal with an option for 2021 that had not been picked up before he signed his extension.

Mets: SS Andrés Giménez left during his at-bat in the second inning with a two-strike count and was replaced by Rosario.