Mike Trout is out again. Out of the postseason, that is.

For the ninth time in 10 years, the Los Angeles Angels superstar will spend October on the couch.

“I don’t like losing,” he said Saturday. “It’s frustrating and it sucks.” 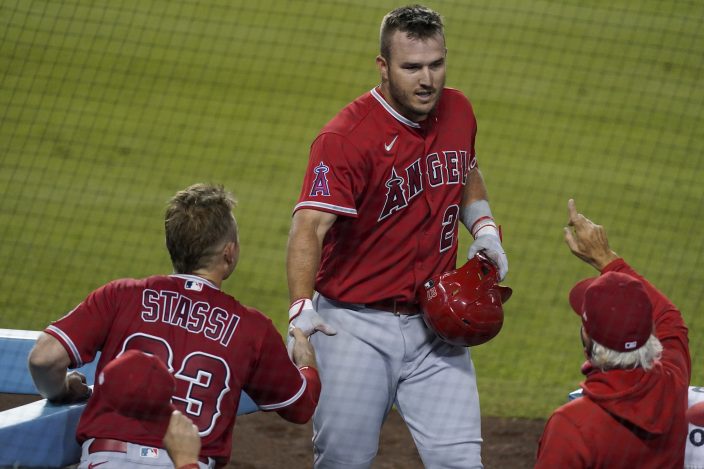 Los Angeles Angels' Mike Trout, center, returns to the dugout after hitting a three-run home run during the third inning of the team's baseball game against the Los Angeles Dodgers on Friday, Sept. 25, 2020, in Los Angeles. (AP PhotoAshley Landis)

The Angels were rolling in the final weeks of the pandemic-shortened, 60-game season, winning 14 of 20 to revive their slim playoff hopes.

Trout hit his first career home run off Clayton Kershaw and the Angels led the Dodgers 5-3 Friday night. They ended up blowing three leads altogether and lost 9-5 to be eliminated, even with the playoffs expanded to 16 teams.

Trout is considered to be the best player of his generation. But at 29 he has just one playoff appearance to his credit, and that was way back in 2014 when the Angels got swept in the AL Division Series.

“I really want to challenge our guys that this is the last time that this occurs for many years to come," manager Joe Maddon said.

Expectations were high when spring training began, with the Angels having added Maddon and third baseman Anthony Rendon. Then the coronavirus pandemic hit. The 2020 season was in jeopardy for months until it finally began in late July. It didn't help that the Angels got off to a slow start, losing 25 of their first 37 games.

“It could have been a different story if we’d have a full season,” Trout said.

Trout cited his inconsistency at the plate as one of the reasons the season became a slog for him. He was batting .281 with 17 home runs going into Saturday night's game against the Dodgers. He wasn't in the lineup.

“I'd go through a good stretch and then I’d lose it a little bit,” he said. “When you have a full season, you minimize that little skid or slump. In a 60-game season, it’s obviously more important. Sixty games doesn’t seem a lot, but it was tough for me."

Maddon and Trout bonded in their first season together, with the manager praising Trout's positivity and love of the game. Trout likes the freedom Maddon gives his players.

“He brings a lot of excitement and joy in the clubhouse,” Trout said.

In the front office, Trout has a close relationship with general manager Billy Eppler, whose contract is expiring.

“Billy was a big reason why I signed back here. He's put a lot of good teams together. It just didn't work out the last few years,” Trout said. “I've had a couple GMs come in here. I've never had the GM relationship I've had with him with anybody else.”

Trout may or may not be watching postseason baseball. If there's nothing else on he's interested in, he'll tune in.

Mostly, though, he'll be spending time with his wife and their son, born nearly two months ago. Beckham's latest accomplishment? Rolling over. “I'm pretty psyched about that," Trout said.

“I come back from a road trip and he’s grown and doing different things over that short period of time,” he said. “Everybody says kids grow up fast and I’m trying to cherish them.”

The years pass quickly in baseball, too, and Trout wants the Angels contending for World Series titles.