The Tampa Bay Lightning missed the chance for another overtime clincher, like in all of their other series this postseason.

They didn't get a power-play goal, either, so the Stanley Cup Final is going at least one more game.

After scoring six power-play goals in Games 2-4 against the Dallas Stars to get on the verge of their second Stanley Cup title, the Lightning had only one such chance early in a 3-2, double-overtime loss in Game 5 on Saturday night. 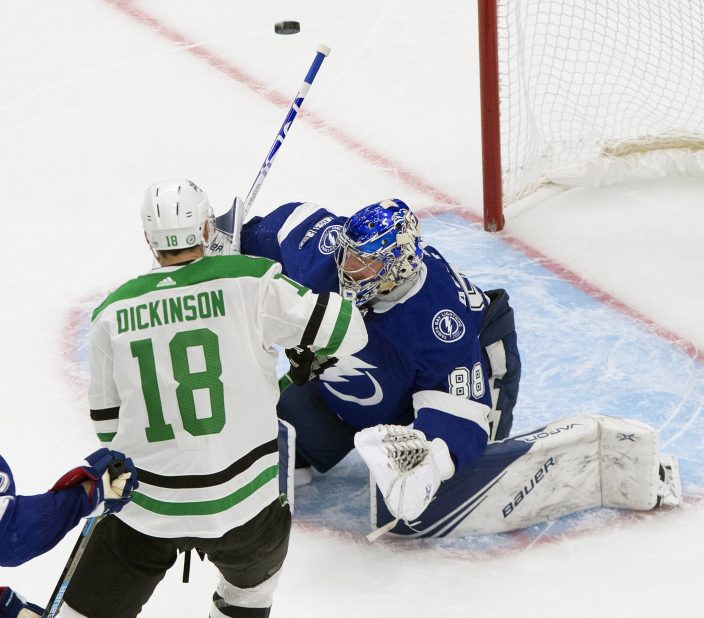 Tampa Bay was thinking about lifting the Stanley Cup — the trophy was in the building for the first potential clinching game — after Mikhail Sergachev scored 3:38 into the third period for a 2-1 lead.

But Joe Pavelski tied the game with 6:45 left in regulation with his 61st career playoff goal, breaking a tie with Joe Mullen for the most for an American-born player. Corey Perry scored the game-winner with 9:23 into the second overtime, his second goal of the game.

The Lightning ended each of their three Eastern Conference playoff series with an overtime victory: Game 6 of the conference final against the New York Islanders, Game 5 of the second round against Boston, and a Game 5 extra-period winner against Columbus in the opening round.

This was Tampa Bay's fourth multiple-OT game this postseason. The Lightning needed five extra periods to win Game 1 against Columbus.

Their OT clincher against the Islanders — after they had lost in double overtime in Game 5, like they just did against the Stars.