MELBOURNE, Australia — Australia’s second-largest city, Melbourne, has further eased lockdown restrictions imposed after a surge in coronavirus cases, allowing most children to return to school from next month and sending more than 125,000 people back to work. 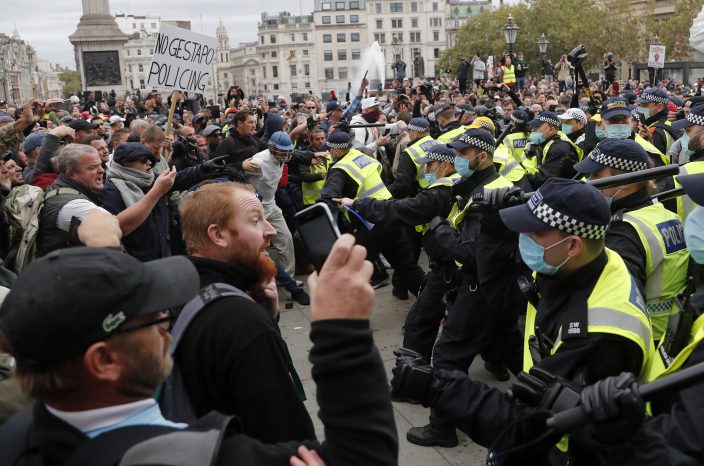 Riot police face protesters who took part in a 'We Do Not Consent' rally at Trafalgar Square, organised by Stop New Normal, to protest against coronavirus restrictions, in London, Saturday, Sept. 26, 2020. (AP PhotoFrank Augstein)

That allowed Victoria state Premier Daniel Andrews to confirm the 9 p.m.- 5.a.m curfew will be lifted from 5 a.m. Monday, though residents still cannot travel more than 5 kilometers (3.1 miles) from home. Public gatherings of up to five people from a maximum of two households will be allowed.

A further easing could take place on Oct. 19 if the average falls below five new cases per day. Masks remain mandatory.

Andrews said there are 399 active cases in Victoria, the first time that number has fallen below 400 since June 30. 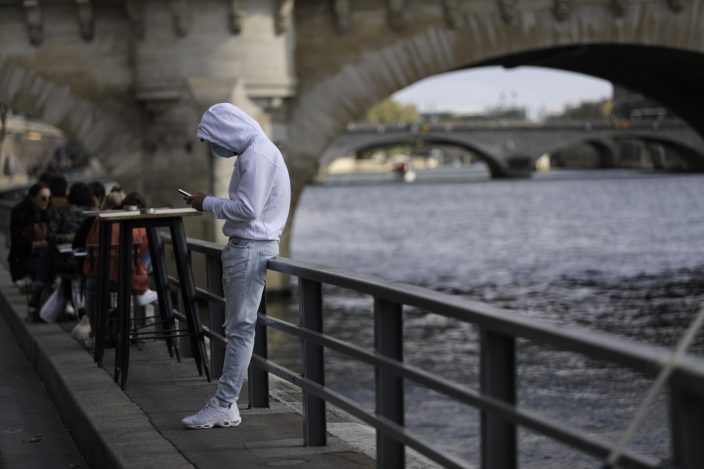 A man check his phone at a cafe terrace along the Seine river, Saturday Sept.26, 2020 in Paris. While France suffered testing shortages early in the pandemic, ramped-up testing since this summer has helped authorities track a rising tide of infections across the country. More than 15,000 new cases were reported Friday, and the Paris hospital system is starting to delay some non-virus surgeries to free up space for COVID-19 patients. (AP PhotoLewis Joly)

— US colleges struggle to salvage semester amid outbreaks 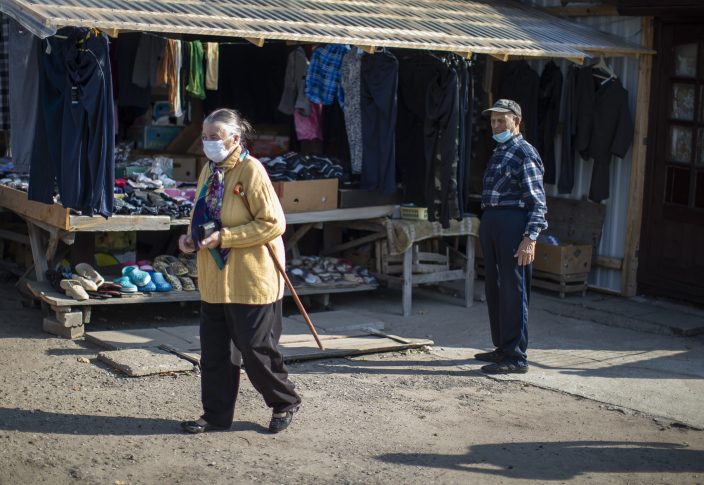 A woman wearing a face mask to protect against coronavirus, walks, at the bazaar in the small town of Ignalina, some 110km (68.3 miles) north of the capital Vilnius, Lithuania, on Saturday, Sept. 26, 2020. (AP PhotoMindaugas Kulbis)

— London police have clashed with demonstrators as they broke up a protest in Trafalgar Square against COVID-19 restrictions amid rising tensions over increased limits on everyday life as the government tries to stem a sharp rise in infections.

— More than 1,000 New Yorkers tested positive for COVID-19 in a single day, marking the first time since June 5 the state has seen a daily number that high.

— Italy’s coronavirus “Patient No. 1,” whose case confirmed one of the world’s deadliest outbreaks was underway, is taking part in a 112-mile relay two-day race as a sign of hope for COVID victims after he himself recovered from weeks in intensive care.

LONG BEACH, Calif. — The California Department of Corrections and Rehabilitation reports two prisoners have died at hospitals of coronavirus-related complications.

One prisoner was at the California Institution for Men in Chino. He was the 22nd inmate at the prison to die of coronavirus complications.

The second prisoner was at Avenal State Prison in Avenal. He was the sixth inmate to die of complications from the virus at the facility.

The department did not provide more details about the deaths.

Meanwhile, all California State University, Long Beach students who live on campus have been placed in quarantine and all in-person instruction will be halted for two weeks because five students tested positive for COVID-19.

MADISON, Wis. — Wisconsin on Saturday hit a record for coronavirus cases reported in a single day as health officials reported 2,817 people have tested positive for the virus.

In another troubling trend, the positivity rate for coronavirus testing has also been among the country’s highest. That’s an indicator that many more people have infections than tests are revealing. The seven-day positivity rate is currently over 17%, according to the COVID Tracking Project. Saturday’s positivity rate for testing was even higher at 22%.

Over the course of the pandemic, 113,645 people have tested positive for the coronavirus in Wisconsin. About 83% of those people have recovered, while over 18,000 have active infections and 1,281 have died. The Department of Health Services on Saturday reported seven new deaths.

OKLAHOMA CITY — The number of deaths in Oklahoma from the illness caused by the coronavirus has topped 1,000.

Officials with the Oklahoma State Department of Health reported Saturday that 11 new COVID-19 deaths raised the state's toll to 1,004.

State health officials also reported that 990 new confirmed cases raised the Oklahoma caseload to at least 83,510. The number of active cases rose by 136 to 12,752. However, the actual number of cases in Oklahoma is likely higher because many people haven’t been tested, and studies suggest people can be infected and not feel sick.

HONOLULU -- A state-owned health care organization in Hawaii will take over a veterans care home where 26 residents have died of the coronavirus.

The arrangement announced on Friday will see Hawaii Health Systems Corporation take over as the operators of Yukio Okutsu State Veterans Home in Hilo. The previous operator, Utah-based Avalon Health Care, will relinquish all control over the facility.

The Honolulu Star-Advertiser reports that the veterans home has had a history of falling short on health standards. The Centers for Medicare and Medicaid Services gave the home a health inspection rating of one star out of five.

There were 89 residents living at the care home before the outbreak. Since then, 71 residents have contracted the virus along with 35 employees.

ATHENS, Greece — Authorities are closing street kiosks and minimarkets from midnight to 5 a.m. in the Greek capital and other areas in a bid to slow the spread of the coronavirus.

Such vendors are a popular after-hours source of alcohol for young people, many of whom have been congregating in squares without adhering to social distancing or wearing masks. The closures are set to begin at midnight on Saturday.

Greek health officials on Saturday reported 315 new confirmed cases of COVID-19 and 7 more deaths. That raised the country’s total case count to 17,228 since the pandemic began and its death toll to 376,

There are 68 people on ventilators, but many more are in intensive care units and the government is concerned about the capacity of the public health system if trends continue.

ANCHORAGE, Alaska — Alaska health officials say the state’s COVID-19 death toll has risen by six, which is the biggest one-day jump for the state since the pandemic began.

The state also reported 128 new confirmed cases of COVID-19 on Friday, which was the most recent available data.

The deaths include three men in their 60s, one man in his 50s and two men in their 70s. The state previously reported a high of four deaths, on Aug. 25.

Alaska has had 8,202 confirmed cases of COVID-19 and 52 deaths from the disease since the pandemic started.

The state also reported 2,795 new confirmed cases of COVID-19, bringing its total since the pandemic began to just under 699,000. Overall, 14,190 people have died in Florida during the pandemic, including 168 non-residents.

There were 2,109 people hospitalized with COVID-19 as of Saturday morning, or 26 fewer than the day before. Florida has had the third-most confirmed COVID-19 cases of any state, trailing only two larger states, California and Texas.

On Friday, DeSantis issued an order allowing restaurants throughout the state to immediately reopen at full capacity. The order prevents cities and counties from ordering them to close or to operate at less than half-capacity unless they can justify a closure for economic or health reasons.

CODOGNO, Italy — Italy’s coronavirus Patient No. 1, whose case confirmed one of the world’s deadliest outbreaks was underway, is taking part in a 180-kilometer (112-mile) relay race in memory of COVID-19 victims and as a sign of hope after he himself recovered from weeks in intensive care.

Mattia Maestri was suited up Saturday for the start of the two-day race between Italy’s first two virus hotspots. It began in Codogno, where Maestri tested positive Feb. 21, and was ending Sunday in Vo’Euganeo, where Italy’s first official COVID death was recorded the same day.

Wearing a black mask, Maestri said the race was a “beautiful initiative” uniting the two hard-hit cities, and that he was thrilled to be even alive to participate.

“I feel very lucky,” he said at the starting line.

NEW YORK — More than 1,000 New Yorkers have tested positive for COVID-19 in a single day for the first time since June 5 the state has seen a daily number that high.

The number of positive tests reported daily in the state has been steadily inching up in recent weeks, possibly because more businesses have been reopening and students have been returning to schools and college campuses.

Gov. Andrew Cuomo announced Saturday there were 1,005 positive cases tallied on Friday out of 99,953 tests, for a 1% positive rate.

From late July through the start of September, the state had an average of around 660 people test positive per day. In the seven-day period that ended Friday, it averaged 817 positive tests per day.

That number of daily positive tests in a state of more than 19 million people still puts New York in a much better position than many other states. And it is worlds better than the situation in the state in April, when the number of positive tests per day routinely topped 9,000 even though tests then were hard to get and people were being encouraged not to seek one unless they were gravely ill.

Orthodox priest shot at church in France; attacker at l ...

The Latest: UN: Over 2 million virus cases in just 1 week

The Latest: Sri Lanka closes harbors after spike in cases