Hospitals in the Paris and Marseille regions are delaying some scheduled operations to free up space for COVID-19 patients as the French government tries to stem a rising tide of coronavirus infections, the health minister said Sunday.

As restaurants and bars in Marseille prepared to shut down Sunday night for a week as part of scattered new French virus restrictions, Health Minister Olivier Veran insisted that the country plans no new lockdowns.

Two Nobel Prize-winning economists proposed in Le Monde newspaper this weekend that France lock down its population for the first three weeks of December, to allow families to get together safely for the end-of-year holidays and “save Christmas.” 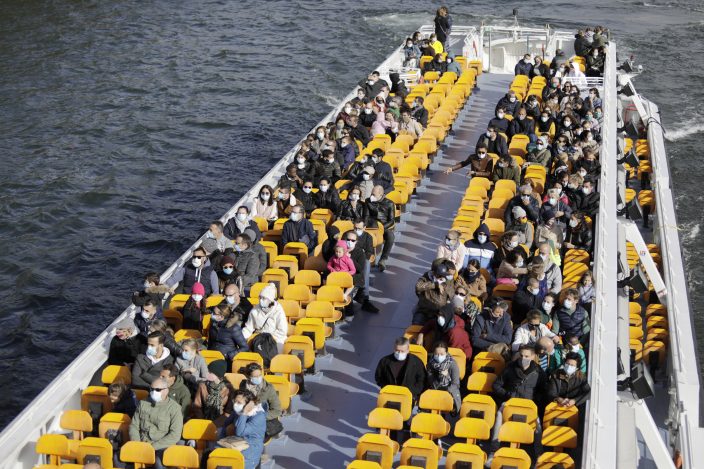 Masked people enjoy a tour on a Seine river boat Saturday Sept.26, 2020 in Paris. While France suffered testing shortages early in the pandemic, ramped-up testing since this summer has helped authorities track a rising tide of infections across the country. More than 15,000 new cases were reported Friday, and the Paris hospital system is starting to delay some non-virus surgeries to free up space for COVID-19 patients. (AP PhotoLewis Joly)

In response, Veran said on LCI television that “we do not want to confine the country again. Several countries around us made other choices. We don’t want this.”

He urged the French to make an effort to slow the spread of the virus, after health authorities reported 14,000 new infections Saturday amid a mass testing effort. France has reported 31,700 virus-related deaths, the third-highest toll in Europe after Britain and Italy.

While at least 10% of French intensive care beds are now occupied with COVID patients, Veran said they’re far from saturation. 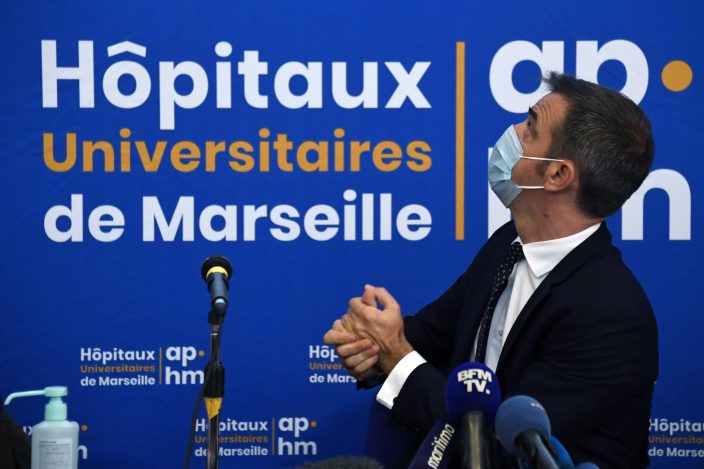 French Health Minister Olivier Veran holds a press conference at La Timone public hospital, Friday Sept. 25, 2020 in Marseille, southern France. Angry restaurant and bar owners demonstrated in Marseille to challenge a French government order to close all public venues as of Saturday to battle resurgent virus infections. The government argues that hospitals in this Mediterranean city are under strain and the closures are the only way to stem the spread while avoiding new lockdowns. (Christophe Simon, Pool via AP)

Still, he said hospitals in the Paris and Marseille regions are delaying scheduled surgeries to free up space. Hospitals temporarily suspended such operations when the virus swept through France in March and April, creating backlogs that still persist six months later, adding to the strain on patients and medical staff.

Marseille restaurant and bar owners and local officials have protested the government's closure order, accusing the central government in Paris of singling out their rival Mediterranean city for punishment.

The government is imposing milder restrictions on Paris and several other cities, with gyms shut down, public gatherings of more than 10 people banned and bars ordered to close at 10 p.m. starting Monday night.