The Latest on the French Open (all times local):

Sebastian Korda, a qualifier whose father, Petr, won the 1998 Australian Open and was the runner-up at the 1992 French Open, has the first main-draw Grand Slam match win of his career. 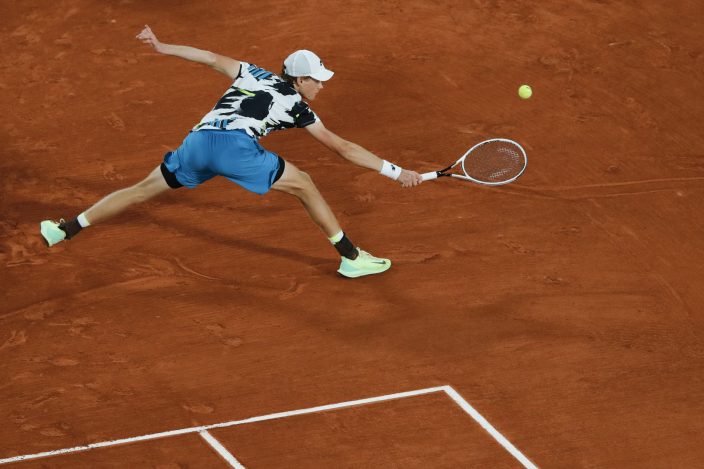 David Goffin has become the first seeded player to be knocked out of the French Open. 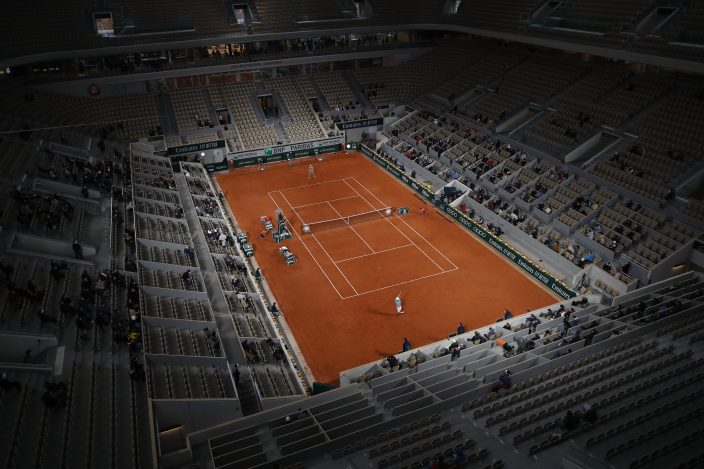 View of center court Philippe Chatrier as Belgium's David Goffin, near side, plays a shot against Italy's Jannik Sinner in the first round match of the French Open tennis tournament at the Roland Garros stadium in Paris, France, Sunday, Sept. 27, 2020. (AP PhotoChristophe Ena)

The 11th-seeded Belgian lost 7-5, 6-0, 6-3 to 19-year-old Italian Jannik Sinner, who beat Goffin for the second time this year after winning on hard courts at Rotterdam in February.

Sinner showcased his talent as one of the world’s best young players by winning the Next Gen ATP Finals last year. He next faces French qualifier Benjamin Bonzi or Finland’s Emil Ruusuvuori.

The U.S. Open runner-up plays either Venus Williams or Anna Karolina Schmiedlova in the second round.

Less than an hour into the French Open, cold and damp conditions at the major that has been postponed from its usually more pleasant spot in May and June are causing grumbling and a temper outbreak from Victoria Azarenka.

The No. 10 seeded Azarenka fumed when match officials didn’t immediately send her and first-round opponent Danka Kovinic back to the locker-room during a rain interruption Sunday on the Suzanne Lenglen court.

Azarenka was leading 2-1 in the first set when a match supervisor asked them to wait on their courtside seats for a few minutes to see if the falling rain would pass.

“I am going to get frozen,” she complained. “No. I’m not waiting here a couple of minutes because I’m cold. It’s eight degrees, eight degrees, I live in Florida, I am used to hot weather.”

Wrapped up in a puffy pink coat, Azarenka asked Kovinic if she wanted to wait on court. The 74th-ranked player from Montenegro agreed that she did not.

Postponed and its crowds nearly all driven away, the French Open is finally underway, defying both the coronavirus and autumn rain with play for the first time under the new roof at the revamped Philippe Chatrier showpiece court.

A crowd, if it could be called that, of around 150 spectators was on hand to see David Goffin, seeded 11th, and Jannik Sinner from Italy hit the first balls in main draw play Sunday under the Chatrier roof that means the French Open joins the other majors as being able to guarantee play in inclement weather.

It will need it: The forecast is grim for the coming days of its COVID-19-enforced autumn slot, pushed back from May and June.

With only 1,000 spectators allowed per day, the cool weather and players undergoing batteries of tests, the fortnight promises to be unique, a far cry from the usual festival of Grand Slam tennis on the clay courts on the western edge of Paris.