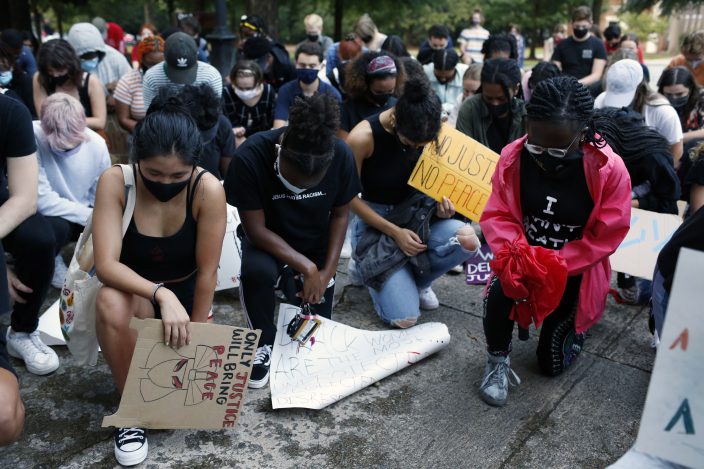 University of Georgia students take a moment of silence for Breonna Taylor at the UGA chapel after marching through downtown during a Black Lives Matter protest in Athens, Ga., Friday, Sept. 25, 2020. (Joshua L. JonesAthens Banner-Herald via AP)

MILITARY-SUICIDES — Military suicides have increased by as much as 20% this year compared to the same period in 2019, and some incidents of violent behavior have spiked. Service members are struggling with isolation and other effects of COVID-19, in addition to the pressures of deploying to war zones, responding to national disasters and addressing civil unrest. By Lolita C. Baldor and Robert Burns. SENT: 1,160 words, photos.

SUPREME COURT-VACANCY — President Donald Trump said Sunday that Justice Ruth Bader Ginsburg’s death and the two men he’s named to the Supreme Court meant “it was definitely time for a woman,” adding that it will be hard for opponents of judge Amy Coney Barrett to “dispute her qualifications or anything about her.” SENT: 750 words, photos. By Darlene Superville and Hope Yen. SENT: 1,100 words, AP Photos WITH: SUPREME COURT-BARRETT-V-GINSBURG — Amy Coney Barrett’s replacement of Ruth Bader Ginsburg on the Supreme Court would represent the most dramatic ideological change on the Supreme Court in nearly 30 years and cement conservative dominance of the court for years to come. SENT: 870 words, photos.

VIRUS OUTBREAK-MILESTONES-SURVIVING COVID — The nearly 1 million people around the world who have lost their lives to COVID-19 have left us a gift: Through desperate efforts to save their lives, scientists now better understand how to treat and prevent the disease — and millions of others may survive. By Marilynn Marchione. SENT: 1,100 words, photos.

UN GENERAL-ASSEMBLY-CLIMATE IN THE SHADOWS — In a year of cataclysm, some world leaders at this week’s annual United Nations meeting are taking the long view. They are warning: If COVID-19 doesn’t kill us, climate change will. With Siberia seeing its warmest temperature on record this year and enormous chunks of ice caps in Greenland and Canada sliding into the sea, countries are acutely aware there’s no vaccine for global warming. By Cara Anna. SENT: 830 words, photos.

RACIAL INJUSTICE-WOUNDED POLICE — Recent shootings of police officers and protests that have left scores of officers injured are stark reminders of the dangers facing law enforcement as the country grapples with police killings of African Americans. Statistics compiled by the FBI show so far this year 37 law enforcement officers have been “feloniously killed” in the line of duty compared to 30 such deaths at this point last year. By Don Babwin. SENT: 900 words, photos.

RACIAL-INJUSTICE-BLM-MERCHANDISE— Some white merchants on the craft marketplace Etsy are offering homespun products with a Black Lives Matter theme, including wine stoppers and garden gnomes. The sellers say they aren’t trying to make light of the issues or widen their profit margins with products that are more often associated with white suburbia than a protest movement. But to many onlookers, the sales through the crafts marketplace Etsy may straddle a line between supporting the effort and exploiting it. By Terry Tang. SENT: 960 words, photos. This is the Monday Spotlight.

AFGHANISTAN-EMBATTLED SIKHS — Afghanistan’s dwindling community of Sikhs and Hindus is shrinking to its lowest levels ever. With growing threats from the local Islamic State affiliate, many are choosing to leave the country of their birth to escape the insecurity. A once-thriving community of as many as 250,000 members, it now counts fewer than 700. By Tameem Akhgar. SENT: 900 words, photos.

VIRUS OUTBREAK-BRITAIN — As authorities sought to contain COVID-19 outbreaks at British universities Sunday, some students complained they were being “imprisoned” in their dormitories and politicians debated whether young people should be allowed to go home for Christmas. SENT: 940 words, photos.

VIRUS OUTBREAK-MASKS IN SCHOOL — Masks are as much a part of the new school year as books and pencils while classes resume during the coronavirus pandemic. But the face coverings pose a problem for educators who teach students who are deaf, hard of hearing or are learning English. SENT: 790 words, photos.

VIRUS OUTBREAK-FRANCE — Hospitals in the Paris and Marseille regions are delaying some scheduled operations to free up space for COVID-19 patients as the French government tries to stem a rising tide of coronavirus infections. SENT: 315 words.

VIRUS-OUTBREAK-MOROCCO — With air and sea borders closed for months and eight cities barring people from entering or leaving, Morocco has been pulling out the stops to stanch the spread of coronavirus. Still, the kingdom on the Atlantic coast, a magnet for tourists in better times, has registered more than 110,000 positive cases since March and has a death toll of 2,041 — the highest among its North African neighbors. SENT: 650 words, photos.

ELECTION-2020-VIRUS-RESTRICTIONS — It’s not just Democrats who want voters thinking about the pandemic on Election Day. Across the country, some Republican candidates are counting on lingering voter resentment of coronavirus lockdown orders to boost them into office. SENT: 800 words, photo.

ELECTION-2020-POLITICAL SPOUSES — Once a reluctant political spouse, Jill Biden is now one of her husband’s most prominent surrogates. Doug Emhoff, meanwhile, has campaigned for wife Kamala Harris throughout her political career, but never at this scale and pace. In the final weeks of the campaign, Biden and Emhoff are joining forces in a nationwide effort to ensure the Democratic ticket succeeds in November. By Alexandra Jaffe. UPCOMING: 900 words by 6 p.m, photos.

ELECTION-2020-TRIBAL BALLOT COLLECTION —Tribes see ballot collection as a critical way to boost historically low Native American turnout, but it’s become a flashpoint in the November election. Nevada has a new law that allows people to fill out their ballots and let someone else return them on their behalf. President Donald Trump’s campaign asserts that so-called ballot harvesting will lead to fraud. Advocates say removing restrictions on ballot collection will help Native Americans who don’t have a way to get to a polling place or a post office to return their mail-in ballot. By Sam Metz. SENT:950 words, photos.

TRUMP-UTILITY-LAKE-RULES — Environmental activists say a little-noticed provision in a Trump administration rule could lead to pollution of some man-made lakes. The provision classifies reservoirs created to provide cooling waters for power plants as parts of “waste treatment systems,” which aren’t covered under the Clean Water Act. SENT: 980 words, photos.

POLICE SHOOTING-WISCONSIN — The Kenosha police officer who shot Jacob Blake in the back seven times last month told investigators he thought Blake was trying to abduct one of his own children and that he opened fire because Blake started turning toward the officer while holding a knife, the officer’s lawyer contends. SENT:630 words, photos.

PROTESTERS-INJURED — A woman who authorities say drove a car into a crowd during a Southern California demonstration against police brutality, striking and injuring two people, has been arrested for investigation of attempted murder and assault. SENT: 300 words, photos.

GENERAL ASSEMBLY-REFORMING THE UN — A virus that has claimed nearly 1 million lives has underscored the failure of the United Nations to bring countries together to defeat it. And it has renewed calls for U.N. reform and for all countries to collaborate to build a world that is healthy, safe and ready to meet challenges far different — and more daunting — than those it faced at its birth. SENT: 970 words, photos.

ARMENIA-AZERBAIJAN — Fighting between Armenian and Azerbaijani forces has erupted again over the disputed separatist region of Nagorno-Karabakh. A top territorial official says 16 people have been killed and more than 100 others wounded. SENT: 560 words, photos.

SWITZERLAND-EU-REFERENDUM — Voters in Switzerland have strongly rejected a nationalist party’s proposal to limit the number of European Union citizens allowed to live and work in their country. SENT: 440 words, photos.

ROMANIA-ELECTION — Voters in Romania are casting ballots in municipal elections, which are being viewed as a test of how the next general election on Dec. 6 will unfold for the country’s minority-led government. SENT: 550 words, photo.

ISRAEL-YOM-KIPPUR — The solemn Jewish holiday of Yom Kippur, which annually sees Israeli life grind to a halt, is taking place in a nation already under a sweeping coronavirus lockdown. SENT: 760 words, photos.

EU-GREECE-US-POMPEO-VISIT — U.S. Secretary of State Mike Pompeo, who is due to arrive in Greece on an official visit early Monday, has had a conversation on tensions in the eastern Mediterranean with NATO Secretary-General Jens Stoltenberg. SENT: 300 words, photo.

EARNS-QATAR AIRLINES — Long-haul carrier Qatar Airways is reporting revenue losses of $1.9 billion for the past year, blaming the coronavirus pandemic, its liquidation of shares in Air Italy and the ongoing boycott of Doha by four Arab nations for the major losses. SENT: 180 words.

BOOKS-THE-DECADES-MOST-CHALLENGED —Toni Morrison is on the list. So are John Green and Harper Lee. And John Steinbeck and Margaret Atwood. All wrote books that were among the 100 most subjected to censorship efforts over the past decade, as compiled by the American Library Association.. SENT: 540 words, photos.

CELTICS-HEAT — Miami gets a second chance to close out Boston in the Eastern Conference finals, when the Heat and Celtics get together for Game 6 of that series on Sunday night. Game begins 7:30 p.m. By Basketball Writer Tim Reynolds. UPCOMING: 750 words, photos by 11:30 p.m.

Swiss to lift freeze on millions linked to ex-Tunisia l ...

Swiss authorities are preparing to ...