Xavier Rhodes delivered the first punch for the Indianapolis Colts on Sunday.

T.J. Carrie finished it off on a milestone day for Philip Rivers.

Rhodes and Carrie each returned an interception for a touchdown, Indianapolis recorded its second safety in as many weeks and Rivers added his 400th career TD pass as the Colts routed the New York Jets 36-7. It's the first time since October 1970 the Colts returned two INTs for scores in one game. The last time it happened also came against the Jets.

Rivers, meanwhile, played like his old self, getting rid of the ball quickly and crisply while avoiding mistakes on a milestone day.

The 38-year-old quarterback was 17 of 21 with 217 yards and played his first turnover-free game since joining Indy (2-1). He became the sixth player in league history to throw 400 career TD passes and the sixth to top 60,000 yards. He also passed Hall of Famer Dan Marino for fifth all-time in completions and broke a tie with Hall of Famer Fran Tarkenton for eighth in league history with his 125th career win. 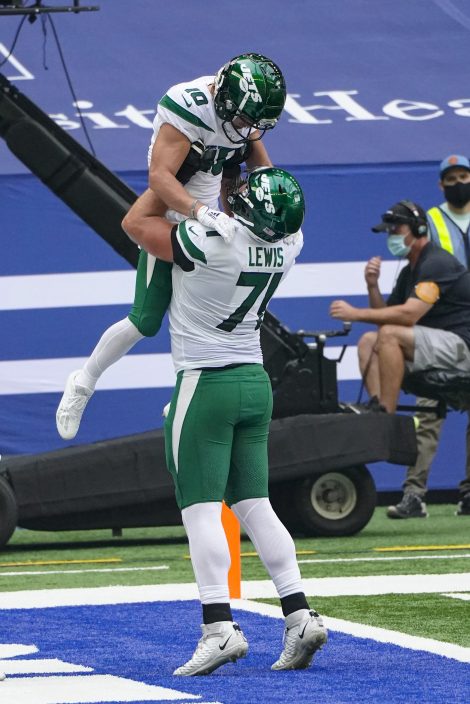 And with the help of a suddenly high-scoring defense, Rivers & Co. made it look easy against the winless Jets. New York is 0-3 for the second consecutive season under coach Adam Gase.

Rhodes picked off Darnold on the fifth play of the game and returned it 44 yards to make it 7-0. Darnold answered with a 16-yard TD pass to Braxton Berrios to tie it midway through the first quarter.

Then, it was all Colts. 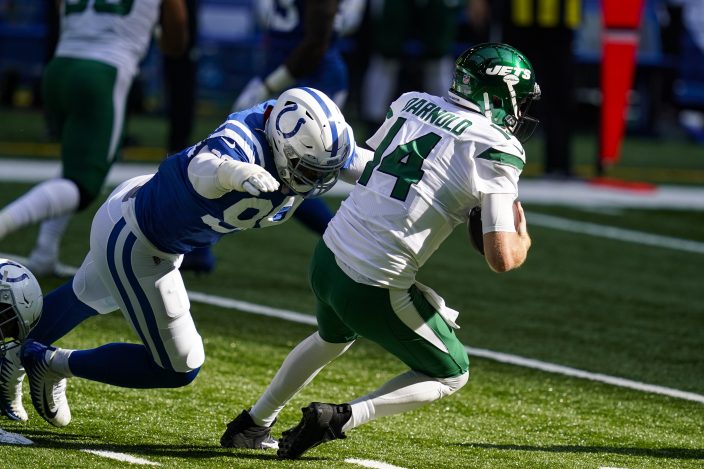 After a pass interference call against the Jets in the end zone, Rivers found Mo Alie-Cox for a 1-yard score to give the Colts a 14-7 lead. Rodrigo Blankenship extended the halftime lead to 17-7 with a 42-yard field goal. Jonathan Taylor's 1-yard TD run on fourth-and-goal gave Indy a 24-7 lead in the third and Carrie's 47-yard interception return on the final play of the quarter sealed it. 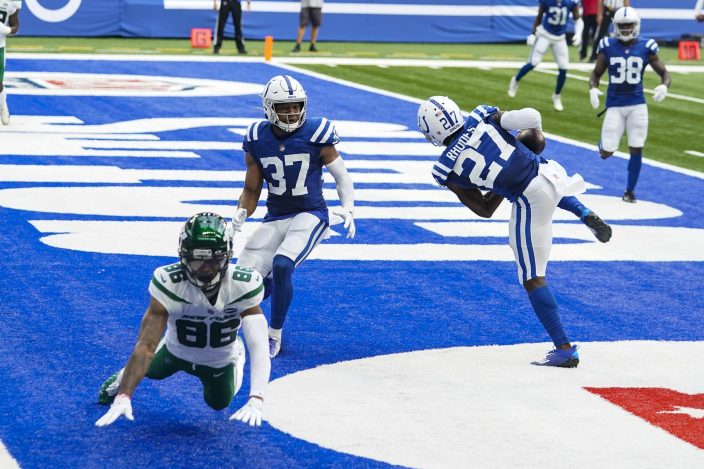 Jets: New York opened the game without starting receivers Breshad Perriman and Jamison Crowder, or right tackle George Fant. All three were inactive. Left tackle Mekhi Becton left in the first half with an injured shoulder and did not return. Linebacker Jordan Willis and safety Bradley McDougald got hurt in the fourth quarter. 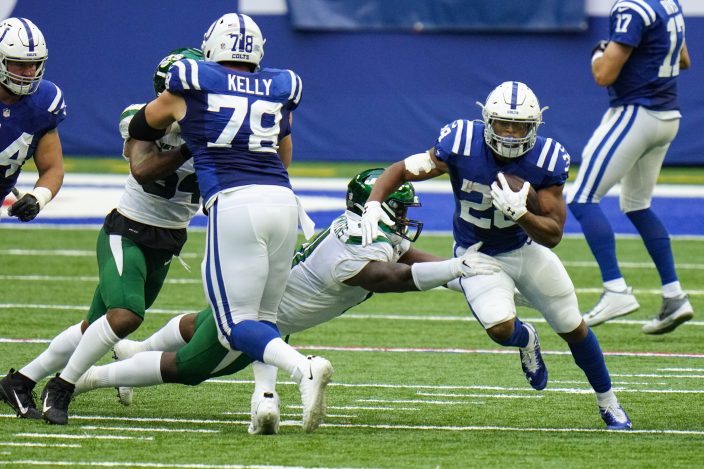 Jets: Ran the first 19 plays of the game, holding the ball for nearly 10 minutes. ... New York had 188 yards of offense in the first half against the league's No. 1 defense but finished with 260. ... Frank Gore ran 15 times for 57 yards against his former team. ... Kalen Ballage caught five passes for 44 yards to lead the Jets. ... Darnold's quarterback rating was 53.2

Colts: Rhodes had two interceptions, one more than his total from the previous two seasons. ... Alie-Cox finished with three catches for 50 yards. T.Y. Hilton had three receptions for 52 yards. ... Taylor ran 13 times for 59 yards. ... Team officials announced 7,480 tickets were distributed. Indy has played in front of fans all three weeks. 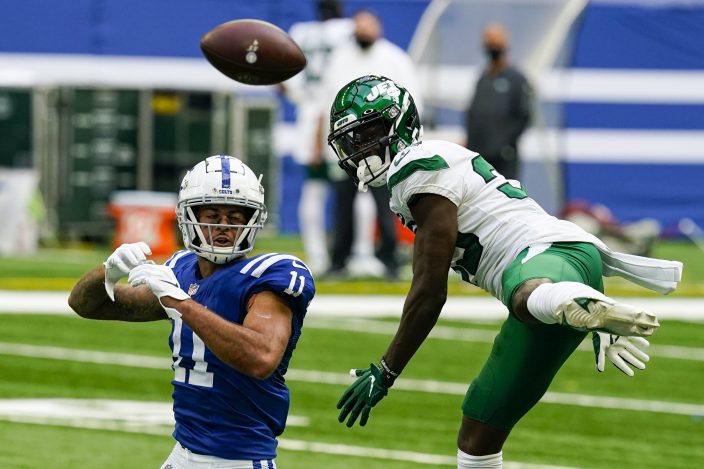 Colts: Will try to win in Chicago for the first time since 2004 next Sunday. 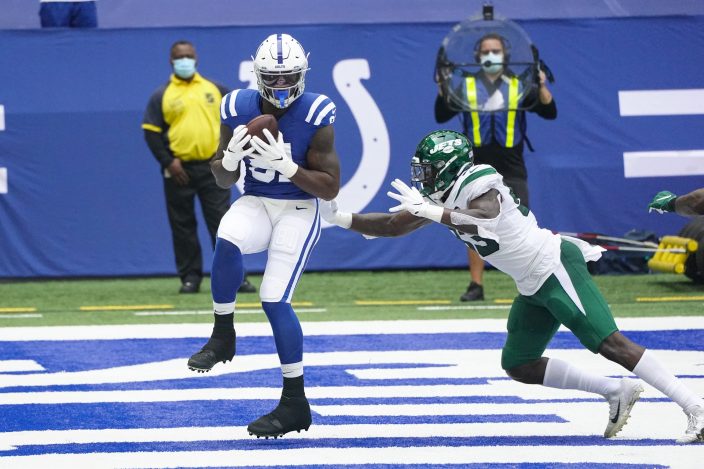 Indianapolis Colts tight end Mo Alie-Cox (81) catches a pass for a touchdown in front of New York Jets outside linebacker Tarell Basham (93) in the first half of an NFL football game in Indianapolis, Sunday, Sept. 27, 2020. (AP PhotoAJ Mast) 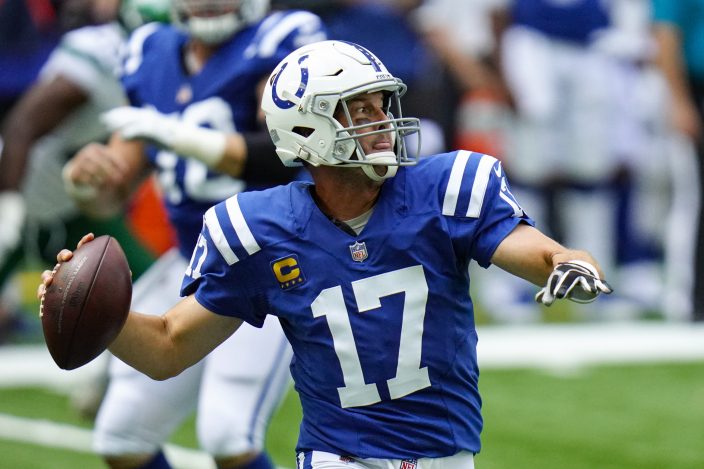