Justin Jefferson blew by the closest man in coverage to make a wide-open catch, sprinted parallel to the sideline and broke through two tackle attempts around the 20-yard line before veering toward the end zone.

The last part of Jefferson's first NFL touchdown was so easy he took the opportunity to slow down and tap dance across the goal line, giving the Minnesota Vikings a 12-point lead over Tennessee midway through the third quarter.

If only Jefferson and the Vikings found the end of the game so trouble-free. 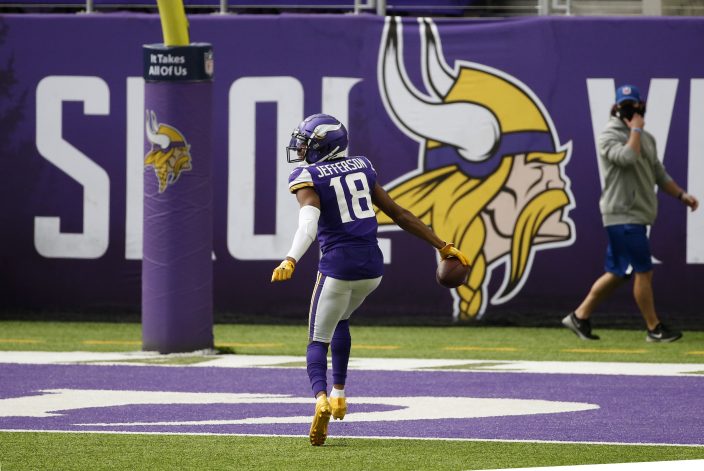 Minnesota Vikings wide receiver Justin Jefferson celebrates during a a 71-yard touchdown catch during the second half of an NFL football game against the Tennessee Titans, Sunday, Sept. 27, 2020, in Minneapolis. (AP PhotoBruce Kluckhohn)

Stephen Gostkowski made his career-high sixth field goal of game, a 55-yarder with 1:44 left that lifted the undefeated Titans to a 31-30 victory over the winless Vikings on Sunday.

“It doesn’t really matter how many yards or catches or touchdowns I had, we still lost,” said Jefferson, who had seven receptions for 175 yards. “We still have some things to fix.” 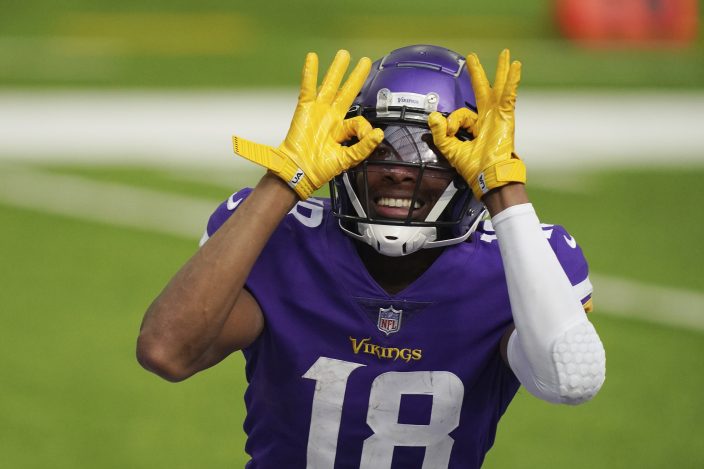 The Vikings, who were outscored 37-13 in the first half over their first two games, produced six drives of 50-plus yards and led for 32:07, including 30-25 with 10:17 remaining when Kirk Cousins hit Kyle Rudolph for a one-handed, toe-tapping touchdown.

The Titans responded with a field goal, and then all that good work by the offense over the first 55 minutes of the game was negated by an unraveling that left coach Mike Zimmer quite upset.

Tight end Irv Smith was called for an illegal block in the back penalty during a run by Dalvin Cook for no gain, pushing the ball back to the 29-yard line. Rookie cornerback Kristian Fulton delivered a sack on the next play, and the Vikings had to punt. 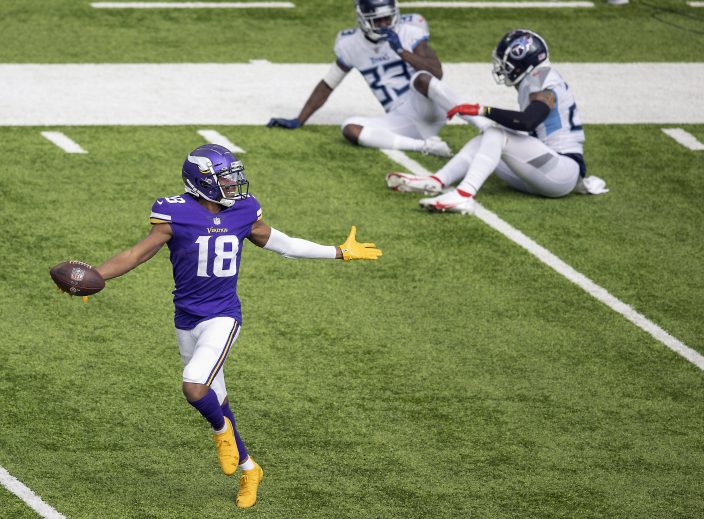 Minnesota Vikings wide receiver Justin Jefferson celebrates after a 71-yard touchdown during the third quarter of an NFL football games against the Tennessee Titans, Sunday, Sept. 27, 2020 in Minneapolis. (Elizabeth FloresStar Tribune via AP)

After Gostkowski's last kick of the game put them behind, the Vikings caught a break when Cousins was hit late by Jeffery Simmons for a roughing-the-passer penalty that pushed the ball to their own 40-yard line with 1:41 remaining.

The Titans cranked up the pressure after that, though. 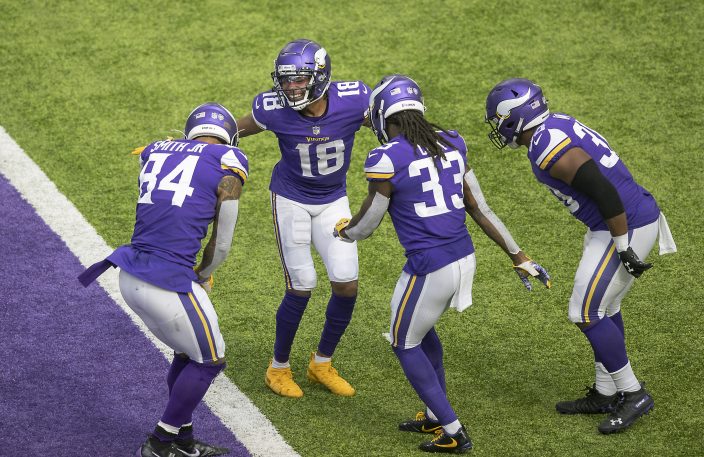 Minnesota Vikings wide receiver Justin Jefferson (18) celebrates with teammates after he ran for a 71-yard touchdown in the third quarter of an NFL football games against the Tennessee Titans, Sunday, Sept. 27, 2020 in Minneapolis. (Elizabeth FloresStar Tribune via AP)

After a hurried Cousins threw incomplete to Cook, who had a career-high 182 rushing yards and a score, a wayward snap by center Garrett Bradbury when Cousins wasn't ready for it led to a 14-yard loss on the fumble. After another incompletion intended for Cook, Cousins had his desperation fourth-down heave picked off by Amani Hooker for Minnesota's third turnover. Cook lost a fumble in the first quarter, and Cousins was intercepted in the third quarter. Cousins has already matched his 2019 interception total with six.

“Those guys are all veteran guys, and I want them to take charge in those moments when we have the opportunity to go down and win the football game,” Zimmer said. “Instead, it was chaos. We’re going to have to get that squared away.”

Said Cousins, who went 16 for 27 for 251 yards and three touchdowns: “You’d have to ask coach specifically what he meant, but we’ll have to work on what didn’t go well there.” 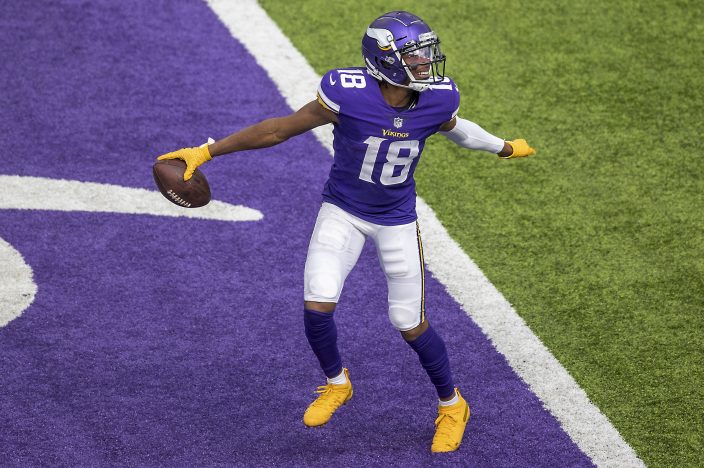 Minnesota Vikings wide receiver Justin Jefferson celebrates after a 71-yard touchdown during the third quarter of an NFL football game against the Tennessee Titans, Sunday, Sept. 27, 2020 in Minneapolis. (Elizabeth FloresStar Tribune via AP)

Jefferson, the 22nd overall pick in the draft, ought to at least give the Vikings a spark to build off.

“He had a great game today. Really proud of the way he played,” said Cousins, who threw only one pass to Jefferson that wasn't a completed, a well-placed throw into the end zone in the second quarter that cornerback Malcolm Butler broke up at the last second.

Chosen with the selection acquired in the trade that sent Stefon Diggs to Buffalo, Jefferson came with especially high expectations that he has not hidden from. Cousins and the Vikings will need him to continue producing like this, to take the attention away from star Adam Thielen in a season that's already on the brink. 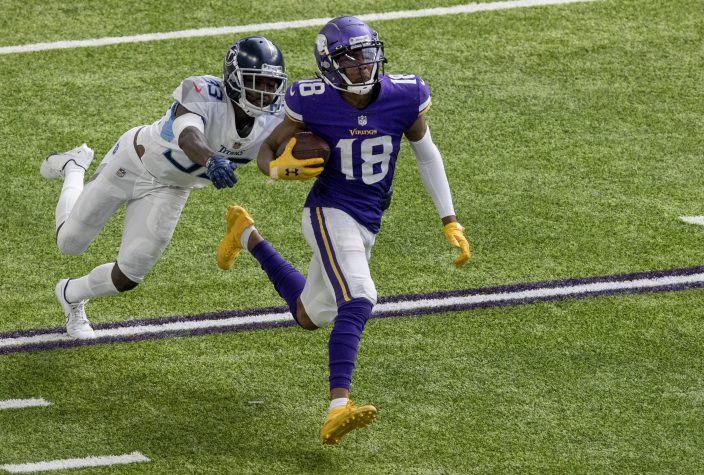 “It boosted my confidence a lot, coming out here and having a game like that on a high level,” Jefferson said. “More to come.”